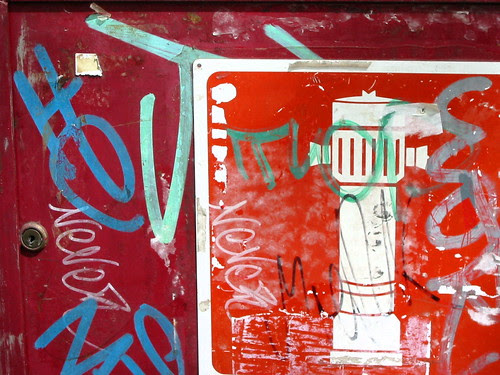 A Wall (Box and Signage)

In the weekend’s gaps betwixt ridding myself of the monstrous din of stacks of print-outs—“unburdening my library” (I must’ve fear’d, early in these here ’thousands, some malign cyber-instability, and so attempt’d to anchor corners of that floating world . . .)— I commenced a three-prong’d approach to Wyndham Lewis. The 1932 novel The Apes of God is providing the bottom. Above and around which circle the fat cloudlets of the 1954 New Directions “Makers of Modern Literature” volume Wyndham Lewis by Hugh Kenner, Lewis’s own Time and Western Man, and the 1963 W. K Rose-edited Letters of Wyndham Lewis. Okay, four-prong’d. Kenner claims that “No historian’s model of the age of Joyce, Eliot, and Pound is intelligible without Lewis in it.” Is it Kenner, too, who notes somewhere that the four were never together in one room? (Whatever that measures—it still gets toss’d out by purveyors of particularly social—read “groupuscular”—goods, as if things occur’d in rooms and not in the stack’d and jostling, or nestling boxes of brains.) Kenner likes to call Lewis the Man from Nowhere, he “materialized one day in 1909 on the stairway at 84 Holland Park Avenue, London . . . a silent steeple-hatted figure wearing a hunge black cape.” (A veritable Lewis character in such descriptive garb, he is mounting the stairs in order to prestidigitate out some “crumpled rolls of manuscript” and deposit them in Ford Madox Hueffer’s “unnerved hands.” In fact, Lewis got born in 1882 on a yacht named “Wanda,” a boat tied up in the harbour at Amherst, Nova Scotia, and belonging to Lewis’s father, “transatlantic sportsman and dilettante,” ex-West Pointer and dabbler in the U. S. Civil War.

The Apes of God rather astonishingly out Joyce’s Joyce (in carouse and lingo), is jam-pack’d with (often extremely pointed, yea, wicked) humor. Here’s Lewis using Stein as a verb: “Sometimes she would Stein away night and morning to herself, making patterns of conversations, with odds and ends from dead disputes, and cat’s-cradles of this thing and that—a veritable peasant industry of personal chatterboxing and shortsighted nonsense.” That regarding a ninety-six year old woman named Fredibonde. Who is also liable to noodle through what gets call’d “a clear case of the compulsion of words.” A sample, wherein she begins with the name of the protagonist, Mr. Horace Zagreus:

About his own assumed name it was he got on to that topic. What made him call himself Zagrooce is a mystery to me, his own name was scarcely more difficult. “Iron-rust” or “Egg-roost” that’s the sor t of thing that happens. Egg-roost. Delightful!
There are tramps sport the name of Herod—french tramps he declares baptized Hannibal. But we survive by words he says—things perish. He got that most likely from one of those Smart Alicks he goes about with.—In some respects he is a master of paradox.
By words, this is it seems the idea we are handed over to the tender mercies of the Past. That is that parasitic no-longer-with-us class of has-beens, he cleverly calls it. In other words the dead.

Time and words and things and the inevitable bleak decay of the body, all jostled there ajumble. If things last longer than beings, words may outlast all. Count the bodily expirations in another paragraph, here Fredibonde’s mate Sir James, who’s toying with a weighty be-lapped book title’d The True Intellectural System of the Universe, by one Ralph Cudworth.

An irish tweed, given a tint of desiccated blood with the bodies of mexican insects, upholstered Sir James’s withered trunk and arms. A clouded tiger upon a stand, stuffed and rampant, recalled early days in Borneo, before he had succeeded to the title. Sustaining the cracked scales of his aged brains—in which he had been balancing Cudworth’s weighty niceties—he had wearied, and the book had subsided at the same time as his failing machine. He fixed his eyes upon the clouded tiger. He did not recall the day when with a bullet he had stopped this swift restless clockwork, dead. A vivid shadow of life, he was too familiar with it to replace it mentally in its distant series.

“Upholstered” like a divan in, perhaps, a “distant series” of divans. And elsewhere, minuscule local pleasures, a man who, replacing a shell on a table, is graced with a “drooped, limp, swan-wristed hand”: “This white-jacketed ossature, playing the crane, deposited it softly until it rested flanked by two stones and a scallop.” And, after such lassitude and poise, the report that “He yaw-yaw-yawned”—terrific precision, ear-goad’d and eye-claim’d. What about the pleasures of a sentence like: “He grasped together manfully is dispersed volition.” Or, someone reshutting a door “wrenched open,” with “a frank angry bang” one cannot help hear.

Big projects either fly in my house, or skulk away defeat’d, and the fourfold Lewis may prove a piece of pie to big for the piehole, to put it quickly before the metaphor entirely goes over to the “other side.” On verra. The Ezra Pound lines Kenner prefaces ’s little book with—“Wyndham Lewis, the man who was wrong about everything except the superiority of live mind to dead mind; for which basic verity God bless his holy name.” Which, in a similar “era”—of minds deaden’d by careerist affect and marketing ploy, or shat over by the info-splurge—may be reason enough to read him, “wrong.”