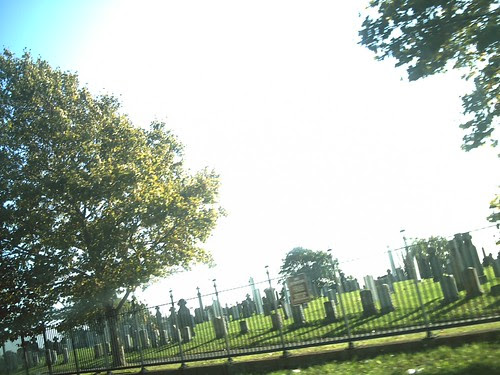 Sunday with its twitches and misfires, a plenary, a ruse. It dribbles out inconsequentially, spent badly, exhaust’d to no end. What Sunday’s for: blowout of surplus time in denial of time’s pinch’d economy. (I hate that kind of talk.) One drifts in and out of Spengler all sunny morning:

For primitive man the word “time” can have no meaning. He simply lives, without any necessity of specifying an opposition to something else. He has time, but he knows nothing of it. All of us are conscious, as being aware, of space only, and not of time. Space “is,” (i.e. exists, in and with our sense-world)—as a self-extension while we are living the ordinary life of dream, impulse, intuition and conduct, and as space in the strict sense in the moments of strained attention. “Time,” on the contrary, is a discovery, which is only made by thinking. We create it as an idea or notion and do not begin till much later to suspect that we ourselves are Time, inasmuch as we live.

And, there with the coverlets in a jumble, the dog sprawling, one tries to insert oneself into timelessness, a world of pure presence (coverlet, dog, sunny slat-work against the wall), a world of individual suspension in a crowd’d morass of the mythological. (Thinking of Spengler’s talk of culture funerary difference: the Greek tendency to torch the earthly remains et c’est tout, versus the Egyptian one of anchoring each deceased to a compleat and accurate and history-making chain, genealogy’s time-binding and boundary.) There’s such a welter and weave to The Decline of the West that it is difficult to pluck the adjudicable quote, disentangle the apparent argument, one reads in a shine (dimming here and there) of seeing, spellbound. One becomes willing—hard thing in a sneering maleficent time—to use a words like “destiny” and “soul.” Spengler, on the opposition between the Destiny Idea (demanding “life-experience and not scientific experience, the power of seeing and not that of calculating, depth and not intellect” and the Causality Principle (“the reasonable, the law-bound, the describable, the badge of our whole waking and reasoning experience”):

In the Destiny-idea the soul reveals its world-longing, its desire to rise into the light, to accomplish and actualize its vocation. To no man is it entirely alien, and not before one has become the unanchored “late” man of the megalopolis is original vision quite overpowered by matter-of-fact feeling and mechanizing thought. Even then, in some intense hour, the lost vision comes back to one with terrible clearness, shattering in a moment all the causality of the world’s surface. For the world as a system of causal connexions is not only a “late” but also a highly rarefied conception and only the energetic intellects of high Cultures are capable of possessing it—or perhaps we should say, devising it—with conviction. The notion of causality is coterminous with the notion of law: the only laws that are, are causal laws. But just as there lies in the causal, according to Kant, a necessity of the thinking consciousness and the basic form of its relation to the essence of things, so also, designated by the words destiny, dispensation, vocation, there is a something that is an inevitable necessity of life. Real history is heavy with fate but free of laws. One can divine the future (there is, indeed, a certain insight that can penetrate its secrets deeply) but one cannot reckon it. The physiognomic flair which enables one to read a whole life in a face or to sum up whole peoples from the picture of an epoch—and to do so without deliberate effort or “system”—is utterly remote from all “cause and effect.”

And, later: “The stiff mask of causality is lifted by mere ceasing to think.” Akin to how the poems require a trance and trust, the throwing of oneself on the mercy of one’s own brash physiognomic compass, sound-board and gut-guttural high-dudgeon. Or how a novel’ll bring history down out of the clouds with a punch, cleaning the clock. A bewitching, a stray walloping verity. Think of Robert Walser’s Jakob von Gunten, the runaway in school. How Spengleresque he seems!

I have sold my watch, so as to buy tobacco for cigarettes. I can live without a watch, but not without cigarettes, that is shameful, but a necessity. Somehow I must get some money or I shan’t have any clean clothes to wear. Clean collars are things I can’t do without. A person’s happiness depends, yet does not depend, on such things. Happiness? No. But one should be proper. Cleanliness alone is a joy. I’m just talking. How I hate all the right words! Today the Fräulein cried. Why? Halfway through the class, tears suddenly poured from her eyes. It strangely moves me. Anyway, I shall have to keep my eyes peeled. I like listening for something that doesn’t want to make a sound. I pay attention, and that makes life more beautiful, for if we don’t have to pay attention there really is no life.

The obverse (or parallel) of the dislike of “all the right words” is, Christopher Middleton notes, Jakob’s blithe (or radical) claim, “Sometimes I say things that surpass my own understanding!” And Walser translator Middleton himself, just to turn one back into history (there is nothing else), in a stunning short prose piece call’d “Life Force”—out of Crypto-Topographia: Stories of Secret Places (Enitharmon, 2002)—insists on history’s nigh-inescapable raptures (which, not unlike the scuba diver’s rapture of the deep, presents a possible world-terminus, a static “heavenly” thing, in denial of its constant becoming, tempting the swimmer to shed air-tanks in an act of joinery), mankind’s dream of entering—and being still’d by— history:

Only once did erstwhile signals officer Weismann, from under a wave of white hair, tell of the ‘charcoal faces’, noses burned off, ears burned off, brought to the hospital ship from the torpedoed cruiser Princeton while the landing on one of those little Philippine islands went forward—feet blown off, men with splintered stump legs and arms, and the medicos busy with them, chopping and sawing, amazed by the erections, and a navy doctor stooped on the steel deck to stroke and stoke the big stiff penis of the gunner they’d laid out on a gurney, the most he could do for him now. Then silence. Fingers pulling at his underlip, near to sobbing, as if the comparison, an old afterthought of his, even while he spoke no longer glossed or blunted the pictures in his memory: No pleasure in that. It’s like the figures with erections on a Greek amphora: the satyrs dancing; no pleasure, but the rapture.

Typing that whilst the calculable storage bin in the brainbox is busy trying to adjust itself to the input: Robert Walser (1878-1956, he collapsed in the snow on the grounds of the asylum at Herisau (Switzerland) he’d enter’d in 1933—“I’m not here to write, but to be mad,” he told Swiss writer Carl Seelig) is a near-perfect contemporary of Wallace Stevens (1879-1955, he never went to Switzerland, or hardly anywhere else—but then, neither did Walser, who has a character somewhere saying: “I’m staying here. It’s nice, just to stay. Does nature go abroad? Do trees travel, to acquire greener leaves elsewhere and then to come back and show themselves off?”), and Franz Kafka (1883-1924, admirer of Walser’s work—first collection in 1904—even before he became Kafka). What would Kafka say to Stevens, or Stevens to Kafka, or Walser to either? 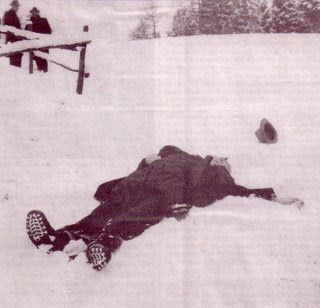 The Death of Robert Walser