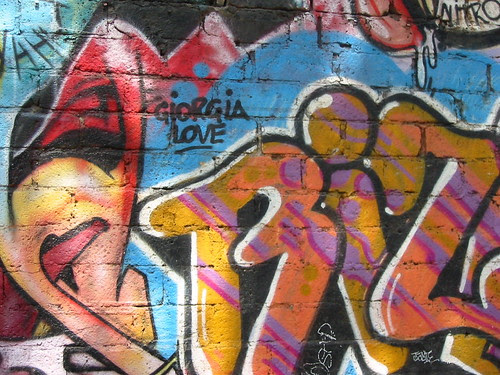 A Wall (An Ear for Business)

Editor Dan Thomas-Glass sent me a copy of the first issue of With + Stand, a striking thing to pull out of an envelope, big format (eight-and-a-half by eleven) sheets with glare yellow covers (simple stencil and spatter in black), and bound with a double wrap of red DANGER tape, adhered with a solid cross of shiny black duct tape. My response: similar to seeing the first issue of No: A Journal of the Arts with (it, too) its stencil and X’s, its vibrancy and will’d mess (running, No did, directly counter its high dollar print and binding job). Staking one’s aesthetic to open defiance, rigorous refusal of the usual. (Or: puckering up to the Zeitgeist’s latest D.I.Y. embouchure, mouthing a rag-tag independent ditty: the bonus being, it’s a mighty cheap way to go.) I like it. I like how it is manufactured, the tape, by Empire. Writing bound up like criminal evidence, like a crime scene, that black tape with all the electrical insouciance of a bomb, a bomb’s “safety catch.”

Title page. One reads: “[Sys tem (noun): 1619, ‘the whole creation, the universe,’ from L.L. systema ‘an arrangement, system,’ from Gk. systema ‘organized whole, body,’ from syn- ‘together’, (sun- With) + root of histanai ‘cause to Stand’].” And, interpreting it all: “[ systems | poetics ]” And, one supposes, sighingly, that if one is no longer in the mechanical age—and one is not—one ought upgrade to a systemic way of thinking, and leave poor old Doc Williams out of it, though is there a big difference between the poem’s being “a small (or large) machine made of words” and being a “system”? Maybe. Williams’s insistence that “there can be no part, as in any other machine, that is redundant” and that it is “pruned to a perfect economy” bespeaks a kind of numeric of wholes, a simpler arithmetic. Opposed to an integral bounce and slough, post-Euclidean planar stretches, waste itself covet’d by the system’s “beaters.” That is to say, the “era” allows (calls forth) more slippage and mix, higher complexities begetting higher dross. Is Williams’s requirement that the writer only “make clear the complexities of his perceptions in the medium given to him by inheritance, chance, accident or whatever” no longer optimum dictum? Williams: “There is no poetry of distinction without formal invention, for it is in the intimate form that works of art achieve their exact meaning, in which they most resemble the machine, to give language its highest dignity, its illumination in the environment to which it is native. Such war . . . is continuous.” Dignity, disdain, snipped off the same rootstock. Just the way “system” itself used to be a dirty word, straits, channels, the draft, &c.

Juliana Spahr: Readers of Spahr’s The Transformation’ll see a similarly gussy’d up frolic of gamine-eyed repetitions in what’s label’d “from The Tradition.” In lieu of “they,” one reads of “me” and a various “not really me”; in lieu of post-colonial gasp-adventures amongst the Hawaiians, one reads of chemical flurries and fallouts amongst the post-ecological multinationals. So:

The whole reminding one of a line out of Spengler, who speaks of how the “professional and inartistic sort of historical research . . . with its collecting and arranging of mere data, amounts for all its ingenuity to little more than the giving of a cachet to the banal-incidental.”

Joshua Clover’s “City” is an ode render’d in pure irony, a mock-lyrical outburst with Eliotic echoes of the “Unreal City,” with Mike Davis chic sociological putterings, with Apollinairean zonal nods, with Situationist “memory of public space” nudges and murmurs, with pat-refs to Lil Wayne, to M.I.A. For all the goop of theory and branding, it reads oddly like a paean to spring break, that particular academic ritual:

Spring where we go out into the system of systems.

Go out into the nodes and the pathways and the sun-green sun.

Out into our city where we came to live in close contagion with beloveds and strangers and neighbors-who-art-a-drag and so finally became organic.

Into our downtown which at evening empties of people and becomes form without content.

We meditate on pure form it arouses the most poetic emotions which turn at once to become dry motes of content.

And the buildings went on reflecting the weather. And reflecting the buildings reflecting the weather. And the elms held their place, the infected elms. And the distance, bitter at being visible. And the distance, centralized and rectilinear. As our walks went on without us. Our beach scenes and our kitchen scenes. Our launches and their lithographs. As stars fell and burrowed. As meat grew terribly dear. And the bombing went on without us, the bombs with their infantile appetite for color. And the workers displaced from the city center. And the center displaced from the city . . .

With a difference? Typing it, I begin to perceive a modulation to the voice, a more-attractive variance, hint of authentic weariness, how our lives go along with no blessing, no accord. Something to impinge against, pierce through the static of the period style.

Enough. Corrupt systems thrive (and count on) high noise to signal ratios—disinformation, glut, chatter, “anything to keep the populace distract’d, minds off the problems of the day.” What I fear—brought out by considering With + Stand’s first issue, in some ways an applaudable first—is that we ironists, chatterers, media hounds, collectors of civic debris and popular curios, we norteamericano poets of the relentless ever-burgeoning imperium—that we do no more than add noise into an already noise-stopped-up system. 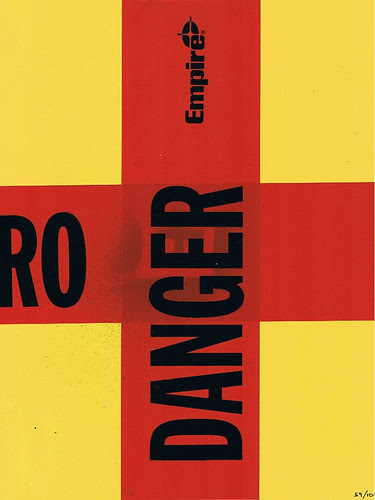 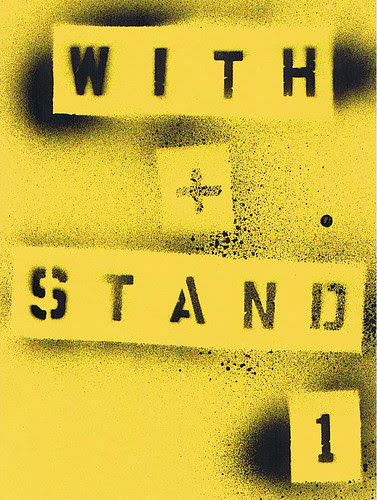 With + Stand No. 1, Binding and Cover

Study of the tactile modes,
Tongue to palette ribbed like
A poulterer’s poultry, that kind
Of repetition that ends in
Farce, or a poulet farci,
A hen stuff’d with a
Clove-stuck onion, tiny Sputnik
Of the gorge getting up,
Mere futurity seeming to stick
In its craw. Do you
Collect anything? I didn’t think
So. It’s cumbersome to collect,
Think of Hölderlin in that
Small room overlooking the north-
Draining Neckar, fingering the slack
Keys of a noiseless piano,
Its strings cut with wire-
Cutters. He calls himself Mr.
Librarian, or Scardanelli—two names
Is not a collection. He
Makes a marginal human niche,
Weds blue to sugar, neo-
Parsimony to wind-sausage, concrete
Syntax to urine-turbidity, does
Sophocles in words color’d red.