Peeking Into the Shredder 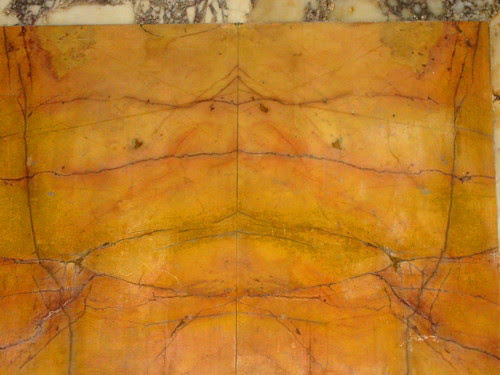 A Wall (Abdomen and Sun)

Thank the warp’d planks of the boathouse floor we’re not artists, no? The green currency outlays go whopper big. See the new Sienese Shredder. See the phenomenally stunning “currency collages” by Mark Wagner. Meticulous, intricate, precise, and spooky. Actual dollar bills (I assume) sliced and spliced into familiar green reveries—a national audience (in 2006’s “The Audience”) comprised of row after row of greenback George Washingtons, with a full-length George standing just behind the curtains preparing to address the whole canny bunch. There’s something of the undecoded (blank) allegorical to it. “Dirty” money, as quotidian as one’s socks, made into pristine art.

The Sienese Shredder’s second issue is chock’d full, worth selling the boathouse for. And I’m only breezing through. Here’s one of the pieces of a sequence titled “Sonnets in the Mouth of an Elizabethan Wolf,” by Christian Hawkey:

My pet cricket is missing a leg & therefore
he only squeaks in circles. Repeat after me
he chirps bleakly. Then he falls over, exhausted.
Hands when holding other hands or waving are happy.
I wave to my hand. My hand waves back. My
cat sniffs the surface of the word bird with a longing
specific to language. Kung Fu I love you.
That’s my cricket’s name. He is in truth ugly
& bitter & overly oiled as any machine
that doesn’t allow pubic hair in sex. This
just in. I am long departed. John Clare unaware
of what I might even call me I hear
upon thy lips the clean breath of insects.
Basically, I can’t stop spying on my master.

Rumplestiltskin cricket. I associate Hawkey with the masses of James Tate spawn. Though: Tate, I suspect, would’ve made up the cartoon cricket, and, satisfied, run it through a longer sequence, and less musically—(thinking of the jagged ambulance of alternating squeaks / repeat / bleakly and cricket / circles / chirps keeping the tensile noise high only to blow it off with exhausted). It’s the “longing specific to language” that begins to intrude here—Tate’s American surreal is a hamper full of longings specific to American objecthood; language for him is (mostly) incidental conveyor of those (admittedly nutty, often spooky and rare) relations. What’s the relation between “Kung Fu I love you” and its purely lingual echo and rhyme “John Clare unaware”? What’s the relation between the Zen koanish hand waving at “my hand” and considering what “I might even call me”?

The bounty of James Schuyler poems, “culled from the 200 pages of unpublished” ones to be found in the Mandeville Library in San Diego, is one of the highlights of the issue. Here’s a short one:

Buried too many canaries, sprayed
for black spot too late too many roses,
unraked, unweeded, the gravel drive.
“There is Helen in the lime walk. How
slowly she walks! She looks very unhappy.”

Which seems to swing with utmost deferential quiet on two little jokes. One’s a nod to a kind of demotic reversal, calling something by the name it’s become: “the ragweed beds.” In the list of ordinary unkemptnesses, the remaining few “lupines” become weedlike, invasives. The other’s the folk belief that an inch worm’s “measure” indicates the need for a thing’s being replaced, renew’d. Poor Helen is rescue’d in a sense by the good-humored caring implicit in the line. (And by the sonic precision of Schuyler’s line—what could be sweeter music than “a dank garage ravaged / of tools except a sprung toothed bamboo”? I suspect that the much-deserved admiration for Schuyler’s “eye”—here it’s putting two “bird”s in one slow and clumsy (bird-squabbling) line—is it done by putting the adjectives in such ambiguous (Janus-faced) places?—that one sees evidence of that eye—’s made us overlook such sonic feats.) A Currency Collage by Mark Wagner