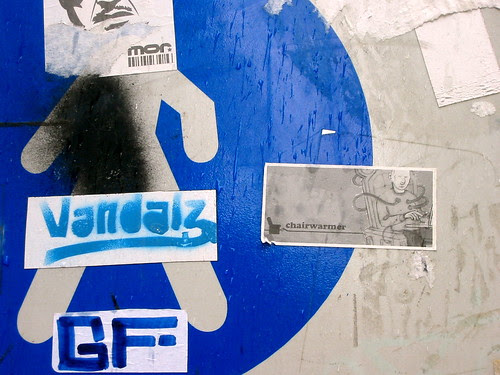 There’s something otherworldly about Elisabeth Workman’s Dusie Kollektiv chapbook Opolis (tÿpøgrafika, 2007). The thinnish canary-yellow paper, imprint’d in green inks, covers of identical stock—it’s audaciously flimsy, an honest pamphlet, recalls the era of fluttery blue aerogrammes with words writ small, inks in danger of bleeding through, a Spartan age of frugality and freedom, under the eave chambres de bonne with a yoghurt and a litre of beer wedged next to the ornamental ironwork. Air transport shot cloud cover for cover, with Opolis reversed out, unserif’d, inconspicuous, recto and verso. And shot through (accompanying each of the twenty-six prose-looking texts) with photographs, architectural, signage, Arabic, a Michelangelo David against a brick wall, minaret silhouettes, a Bush-vampire fanging Lady Liberty, pines, debris, print’d every which way, and bleeding spectacular ghost images “behind” each piece. The graphic work and images by Erik Brandt. Print’d in Doha, Qatar. Epigraph by Charles Baudelaire, that sheik of modernity: “N’importe où! n’importe où! pourvu que ce soit hors de ce monde!” “Somewhere! anywhere! just so long as it’s not this world!”

mercenary, maverick, or missionary—one of the three. Apparently, aside from the alcoholic, oil-eyed narcissist who hasn’t left the sealed villa in three weeks, you should submit to classification. Live on the street with a concrete-slab vista, among amiable guards you always make a point of waving to and the mechanical gushes of water over plastic rocks, marking the entrance. Live as a number under the name, most likely a neologism of capitalist & eastern ideals. There’s the over-chlorinated pool and the water that induces balding. Live a refrigerated existence. On the other side of the walls, the nature of the shifting desert, snakes, and the yellow school bus full of indentured navvies lurk. The nefarious cranking and tapping of industrial machinery define nocturnal white noise. You find yourself wanting to complain about local ways though you’re not really certain how much is local or how much you’ve become a non sequitur

Opposite a photograph of a public space, escalators descending off and away, a square cover’d with electrical wires and several pup tents, each with a white cross attach’d—I think of Joseph Beuys’s constructions with thick felt and crosses, red—stories of rescue by tribesmen, or international agencies. (And, with the embedding of n-oddities (“navvies,” “nefarious,” “non sequitur”—fourteenth letter) and the twenty-six parts, it blooms up slow as an “analogue” photograph in a shallow tray of developer—there’s an alphabetical scheme to the doings here. The parts populated by words of that letter—01:01 by a, etc.—though beginning with the letter previous—therefore, “mercenary, maverick, or missionary”—a surefire way to throw one off the scent. The titles of the parts, too, begin with the appropriate letter: “Assumptions, or To Set into Operation,” “Basic Difference Between the Tribal and the Civilized,” “Choice and Collective Whim,” etc. And the whole piece is ouroboros’d by its first word: “zeal.”)

“Zeal” as in “zealot.” For there is no little sense of the present age of zealotry about the pieces. “Zeal is another approach to mapping blood” is how the thing begins, and the n-stanza provides—as it were—a limit of choices: “mercenary, maverick, or missionary.” The only available subject-positions (“submit to classification”) of the new imperium. Everywhere in Workman’s piece is uncertainty, failure, blockage, threat. As we ourselves’ve become the new “locals,” seal’d off against ourselves. In the a-stanza she writes: “In the distance, obstructed or artificial, we could still hear the iambic ah-ha’s of the highway and I made it about myself by myself with a warning about bullshit and bliss and architecture”—post-apocalyptic, post-identity, history reduced to a susurrus—“poetic”—in the distance. (Elsewhere, reiterating: “We eternalize only flux, the factual hamlet so lately ethereal. Sir, only evangelists see a sanitized sky.” Which “hamlet” somehow rings out a Shakespearean echo, and that of the tiny Vietnam hamlet destroy’d “in order to save it.”) Or, the city itself—the “           opolis,” O polis!—it, too, in a heave of demolishing and reconstructing, got at now with levity: “Say to the new skyscraper, you are not from around here are you, like a statement.” Again, that sense of no-belonging, and of being everywhere at once—one is colonized just as one is the colonizer: “The smell of breath is sony, the sweat blooming from skin, viacom.”

Opolis seems wholly and profoundly of its era (an “era” partially defined by statements like Workman’s “heaven is as hell is a hoax I decide so I make up multiple eras all at once and so overwhelming one wants to explode out of sheer inherited longing”). The unnamed global city consciousness-miasma we imperialists’ve inherited versus the longing for elsewhere. Workman, in a lovely line (there are many): “we dream omnisciently of there, which oscillates between never and now, operatic and open-mouthed.” 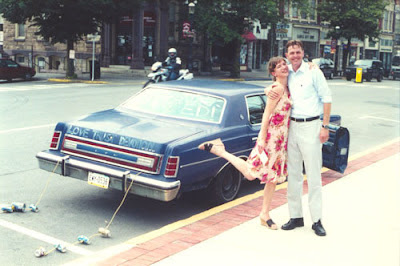