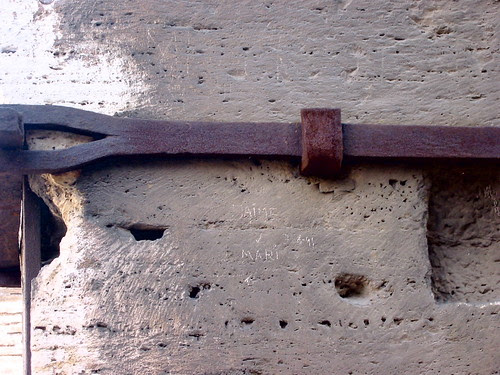 A Wall (Pock and Barricado)

Still about Ajax, and translations, interpretive, “off,” traduced, “translucinated.” The man I neglect’d in yesterday’s tiny list: Pound. Isn’t that where such things begin? (Pour nous.) In a foreword to John Tipton’s version, Stanley Lombardo writes: “Aeschylus is famously reported to have said that Greek tragedy consisted of leftovers from the great banquet of Homer.” All day barbarity: to rehash that into something like “our twentieth century poetry in translation consists of storm debris of the hurricane named Ezra.” Think: even Robert Lowell had Imitations. Is it Pound, though, or the “American” character at work, that half-ass’d lingually dumb ox who plows deep, sows whatever’s “at hand,” and snorts at the critical barb? Edmund Wilson’s got an early sketch (1922) of Pound that puts him up as “incurable provincial . . . driven to Europe by a thirst for romance and color that he could scarcely have satisfied in America.” For Wilson, Pound is “tainted with an obsession . . . : the frantic desire to flee as far from Idaho as possible, the itching to prove to Main Street that he has extirpated it from his soul.” His deficiencies are those of “experience and feeling”; “it is all too often exclusively the Europe of books in which he finds himself forced to continue to live”; hence, the “continual recourse to translation.” And, there too, a “fatal inadequacy,” a “lameness.” And, one’d maintain: a permission. (“The point? Freedom.” Is what Clark Coolidge says.)

What John Tipton’s done with that permission he details in an afterword call’d “An Acounting”:

This translation uses a counted line. That is, the length of each line is determined by the number of words in the line. Further, I have constrained the number of words per line to match the number of metrical feet found in the Greek. . . . Consequently, in rendering the speeches, I use six words to the line. . . . The translation has as many lines as does the original . . . Essentially I have taken the play into English at an exchange rate of one English word for every metrical foot in the Greek.

Too, Tipton’s fuddled the Chorus “into a kind of disturbed unconscious to the play itself” by means of “two deliberate distortions”:

First, I eliminated any use of first person in the chorus to disembody it. And second, I exaggerated the psychological elements and distressed the syntax into a slightly disjointed raving. The result is a sinister, nagging voice that punctuates the action.

A random sample page or so, the “effete Menalaus” and Teucer, half-brother to Ajax and replacement after the latter’s suicide:

Menalaus: How will I break divine laws?

Teucer: If you don’t allow him burial.

Menalaus: No, he declared war against me.

Teucer: When did Ajax ever confront you?

Menalaus: You know we hated each other.

Teucer: You rigged a vote against him.

Menalaus: The voters rejected him, not me.

Teucer: You sure made it look legal.

Menalaus: You’re starting to piss me off.

Teucer: Hear this: he will be buried.

Menalaus: I once know a real loudmouth
who wanted to sail in winter.
When the weather started getting rough,
he didn’t seem quite so talkative
and was much easier to tolerate.
Your yammering reminds me of him.
We just need a little storm
to get some quiet around here.

Teucer: I once knew a fool myself
who enjoyed seeing other people hurt.
One day, somebody resembling me,
with a temper like mine, said,
“Don’t insult the dead, my friend,
if you do, you’ll regret it.”
Right to the unfortunate man’s face.
You remind me of that man
quite a bit.
You get it?

I like the up-tempo velocity here, hinting at blood-quickening, mounting anger, notable particularly in the two longer speeches. I think the six-word ploy is somewhat less exhilarating in the one-line banter—it’s got the effect at times of diminishing distinctions between the antagonists. Too, it’s difficult (with such a constraint) to maintain “register” in the diction: to my ear there’s a big difference between the lovely naturalness of “You’re starting to piss me off” and Menalaus’s subsequent, rather finicky “I’ll say one thing: no burial.” Quibbles, quite likely. (I did wonder about the possibility of assigning different word counts to the various characters—a way of turning the emphases.)

A tiny glimpse at the “Chorus of Sailors” (here, opening the second movement, just after Ajax’s self-inflict’d death):

hurt heaps hurt here
left right
left where it will
will it learn the place?
dropped it
dropped can’t find it be found
half a boat’s oars in sync
with what?
beach to the west is stippled
by tracks
that fade like sores fill eyes
when stares the sun so much
it’s plain what follows the man

Which is lovely, mysterious, stunned, groping. Tentative and sure à la fois. Sense of disembodied voices rising up out of blood-soak’d (Ajax’s madness is signal’d in the opening scene by him in a frenzy of slaughtering herds and herdsmen) darkness, the old order (“left right / left where it will”) completely sunder’d.

The cover photograph of a collection of freshly-butcher’d sheep heads mount’d against a white wall—by the Israeli Nadav Kander (“Severed Heads, Faroe Island,” 2006)—is formidable, mesmerizing, right. (A detail: inside the front flap is what looks like a towel, hung up too, shaped by accident or design to resemble another head, a haunting-comical touch.) Design by the inimitable Jeff Clark, who stretch’d down the j of the title-page Ajax to resemble a knife. 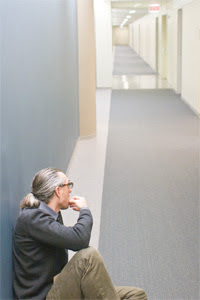 Light’d a black conical bidi up, Monsieur Melmac Fungible did, answering
To some higher calling. Suppose the sanctimonious retrograde gauging this backwater
Port of no call didn’t kick in for once, would the
Fairways look any different? Or put the fumigatory hoses back atop
The plinths they got down off, negligent, sheer, platitudinously mouthing off
For the benefit of some corpus of lies, order to maintain.
Sans culottes repudiators. Stevedores impudiques. Sad havocs and vatics. Broils.
Two suddenly-gone-sour-on featurettes of early twenty-first century
Grunt kingdoms, hanging a ‘rhino’ construct’d out of a toaster oven
Off the gun-end of a tank. Hit man, my ass.
Lift’d a block’d comical bidet up, Mr. Melmoth Fungoball did, swearing.

Pestering (that is, plaguing) the question of what a cross between Ivy Compton-Burnett and Clark Coolidge’d look like. Not like that. I like Coolidge’s prefatory statement to On the Nameways, how in “an empty moment” when he’d begun to think he’d “run out and had no more to do” he “found lines coming” and follow’d then “into short poems, strange to see, indicating I know not.” I like the brash lack of intent. Though it intervenes, soon enough:

Eventually I began writing them while watching movies (from Hopalong Cassidy Enters to Last Year at Marienbad) on satellite TV, a practice reminding me of de Kooning drawing with his left hand, Guston pen in hand watching the Watergate coverage, and of course Kerouac scribing his Blues. The point? Freedom. An overcoming of the obstacles erected by any conceptions of the poem.

And Compton-Burnett? Trigger’d by a Guardian note how difficult it is to find the novels now in England. One of O’Hara’s oddballs. Novels of nothing but dialogue. A woman named Kay Dick in an interview prodding her:

You catch your people terribly unawares, don’t you?

There’s a lot of abandon in your people. They don’t mind what they say about themselves, do they?

No, they don’t. If you’re writing in dialogue I think that’s necessary. If you cut the dialogue out there’s not much left.

That fierce catching “unawares” and in “abandon”: it’s there that Compton-Burnett and Coolidge marry. “Small analgesic membrane tocsins / one foot on the shore / we’ll have to go home now Brainy / the capes no longer open,” says Ivy. “The occasion of Ridley’s discomfiture is spoiled by its tragedy,” says Clark. Each more honest than the other.