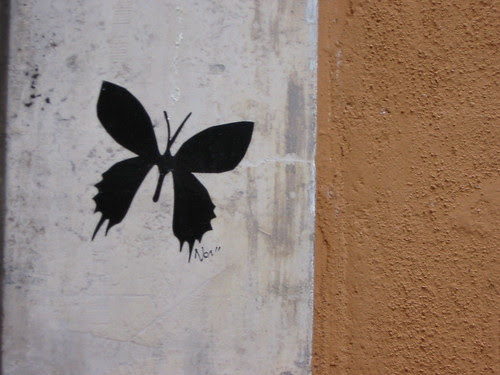 How I read. Javier Marías, in Written Lives:

The two men admired each other enormously, and James considered Stevenson to be one of the few people with whom he could discuss literary theory. Nowadays, almost no one takes the trouble to read Stevenson’s essays, which are among the liveliest and most perceptive of the past century.

Enough to pique. Odd alignment of Henry James, that snoot, and Robert Louis Stevenson, books for dogged boys, is there something there in the slipstream, piratically abob? Stevenson, in “On Some Technical Elements of Style in Literature”:

Now the first merit which attracts in the pages of a good writer, or the talk of a brilliant conversationalist, is the apt choice and contrast of the words employed. It is, indeed, a strange art to take these blocks, readily conceived for the purpose of the market or the bar, and by tact of application touch them to the finest meanings and distinctions; restore to them their primal energy, wittily shift them to another issue, or make of them a drum to rouse the passions.

Tight as the versifier may draw the knot of logic, yet for the ear he still leaves the tissue of the sentence floating somewhat loose. In prose, the sentence turns upon a pivot, nicely balanced, and fits into itself with an obtrusive neatness like a puzzle. The ear remarks and is singly gratified by the return and balance; while in verse it is all diverted to the measure.

Echoes of Pound, tiny hoofbeats of Pound. And here, too:

Music and literature, the two temporal arts, contrive their pattern of sounds in time . . . the true business of the literary artist is to plait or weave his meaning, involving it around itself so that each sentence, by successive phrases, shall first come into a kind of knot, and then, after a moment of suspended meaning, solve and clear itself. In every properly constructed sentence there should be observed this knot or hitch; so that (however delicately) we are led to foresee, to expect, and then to welcome the successive phrases.

Cf. Pound: “an intellectual and emotional complex in an instant of time,” “Rhythm is form cut into time,” “ply over ply.” Cf. Marianne Moore’s lovely phrase—“a counterfeiting verbally of the systole, diastole, of sensation” (in “A Machinery of Satisfaction”). Stevenson:

Each phrase of each sentence, like an air or a recitative in music, should be so artfully compounded out of long and short, out of accented and unaccented, as to gratify the sensual ear. And of this the ear is the sole judge. It is impossible to lay down laws. Even in our accentual and rhythmic language no analysis can find the secret of the beauty of a verse; how much less then, of those phrases, such as prose is built of, which obey no law but to be lawless and yet to please.

To be lawless and pleasing. The way reading is—aimless, unrestricted, knotting up and releasing. Connecting rivers by portaging, following out a succession of leads. (With a canoe for a hat.) Or, veering off suddenly, brain-wincingly. The odd book abandoned on the coverlet, dove into:

Cold and phlegmatic in their own nature, like damp hay, they heat and inflame by co-acervation; or like bees they become restless and irritable through the increased temperature of collected multitudes. Hence the German word for fanaticism, (such at least was its original import,) is derived from the swarming of bees, namely, Schwärmen, Schwärmerei. The passion being in an inverse proportion to the insight, that the more vivid, as this the less distinct . . .

The inimitable Mr. Coleridge. (Sometimes I think I’m “in love” with Coleridge.) He’s talking about “genius”: “A debility and dimness of the imaginative power, and a consequent necessity of reliance on the immediate impression of the senses, do, we well know, render the mind liable to superstition and fanaticism.” Yep. Just ask the bob-Google crowd hereabouts.