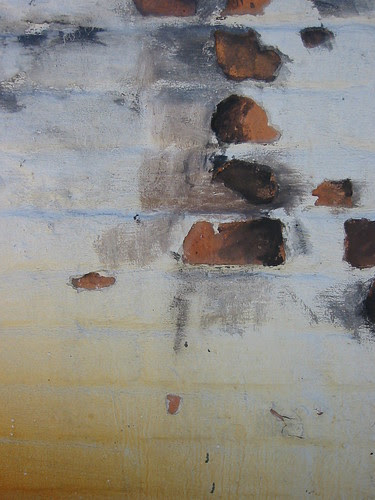 My fumbling about with the notion of “the abstract” against a counterweight of “adjectival onslaught” in Lisa Robertson’s work (in particular, in Debbie: An Epic, some post-Debbie work favors a pared-down diction, direct statement) sent me scampering back, first, to Pound’s “A Retrospect.” Here’s the whole of the pertinent (as printed in the Knopf 1918 Pavannes and Divisions under the subtitle “Language”):

Use no superfluous word, no adjective which does not reveal something.

Don’t use such an expression as “dim lands of peace.” It dulls the image. It mixes an abstraction with the concrete. It comes from the writer’s not realizing that the natural object is always the adequate symbol.

Go in fear of abstractions. Do not retell in mediocre verse what has already been done in good prose. Don’t think any intelligent person is going to be deceived when you try to shirk all the difficulties of the unspeakably difficult art of good prose by chopping your composition into line lengths.

What the expert is tired of today the public will be tired of tomorrow.

Be influenced by as many great artists as you can, but have the decency either to acknowledge the debt outright, or to try to conceal it.

Don’t allow “influence” to mean merely that you mop up the particular decorative vocabulary of some one or two poets whom you happen to admire. A Turkish war correspondent was recently caught red-handed babbling in his dispatches of “dove-gray” hills, or else it was “pearl-pale,” I can not remember.

Use either no ornament or good ornament.

Okay, I am over-spending my quote-allowance. Allowable with Pound: he micturates on the ignoble gamely (meaning: I enjoy the sass.) One question: is “dim lands of peace” comparable to these (Robertson) lines?

I try to unloop the sentence. What does it mean to “greet the transcendent”? And then to lay it at the “foundations of cognition”? (I think of Kristeva’s chora. I think of “on the tip of my tongue.” Some pre-lingual encounter that mimics the metaphysical stride off into the aphasic “beyond.”) (It is not that I am troubled by the kind of semi-tangible—unparaphraseable “meaning” Robertson harries—or quarries—here: that kind of thing goes with the territory. What I find astonishing is how it is achieved with so little that is “concrete.” That “bundle” is there; that “number” is there. Achieving the first carries a tiny sexual charge: one is boosted into language by desire’s achievement.)

Another question: is “dim lands of peace” exemplary of the kind of adequacy Pound seeks? (If so, “dim lands” tout court should suffice, dishing up “peace” unadorned.) (“Dim lands” dishes up privation and sorrow, listlessness and the perishable, a refugee state.)

The second place to look, closer to Robertson’s aesthetic, is O’Hara. (In my mild-concussed head I sometimes think he wrote of “dim lands of peace” versus “dim lands for peace.” No, he did not.) Out of “Personism,” that untrustworthy document:

Abstraction in poetry, which Allen [Ginsberg] recently commented on in It Is, is intriguing. I think it appears mostly in the minute particulars where decision is necessary. Abstraction (in poetry, not in painting) involves personal removal by the poet. For instance, the decision involved in the choice between “the nostalgia of the infinite” and “the nostalgia for the infinite” defines an attitude toward degree of abstraction. The nostalgia of the infinite representing the greater degree of abstraction, removal, and negative capability (as in Keats and Mallarmé). Personism, a movement which I recently founded and which nobody yet knows about, interests me a great deal, being so totally opposed to this kind of abstract removal that it is verging on a true abstraction for the first time, really, in the history of poetry.

Which seems agreeable enough, though it always struck me as a tiny spate of “filler,” a slowdown—the martini getting watery—in the midst of the (otherwise) chockablock uptempo of the piece. And I generally assume O’Hara’s funnin’ us, doesn’t particularly give a damn about abstraction in poetry (though “not in painting”), one way to keep one’s practice high and dry, unblemished by (heroic) projections, and theory-death (it’s only “in the minute particulars where [any] decision is necessary”).

Funny thing, I never thought twice about the Ginsberg mention here. Off to find It Is. Which turns out an unabashedly “avant-garde” art magazine (six issues, roughly 1958-1960), purely abstract-expressionist in tendency, full of polemics, “statements,” journal-page-like things labeled “cahier leafs,” blotchy black-and-white plates, a few color plates, some terrific “candid” photographs by man-everywhere Fred W. McDarrah, and a seeming preponderance of writing about the proper ways and means of writing art criticism. Edited / published by Sebastian Gallo and one P. G. Pavia. (Two notable pieces that first appeared in It Is: “Five Participants in a Hearsay Panel,” by Elaine de Kooning, Frank O’Hara, Joan Mitchell, Michael Goldberg, and Norman Bluhm, and John Cage’s “A Lecture on Something.”) (Flip side of that coin: what scads of “today hardly traceable” abstract-expressionists grace the pages—what’s become of John Grillo, Enrico Donati, and Fritz Bultman? Where’s Alice Baber and Stefan Achilles? Cautionary tale city, it is.)

Ginsberg’s remarks on “abstraction in poetry” consist mostly of examples—Corso, Kerouac, Burroughs, with mention of two “long meaningless poems,” O’Hara’s Second Avenue and Koch’s When the Sun Tries to Go On (Ginsberg’s impeccable sense of audience in evidence here). He talks about Corso’s “sheer, flaming, verbal construction, with no practical meaning” (“Hay like universe, golden heap on a wall of fire sprinting toward the gauzy eradictation of Swindleresque Ink!”), poems “built on some kind of later explainable ellipse—the mind instinctively attracted to images coming from opposite ends of itself which, juxtaposed, present consciousness in all its irrational (unfigure-outable-in-advance) completeness.” Or (about Kerouac) “the rhythmic zigzag flow of his thinks, long and short, thru all their a-syntactic forms . . . an organic prose bebop babble . . . extremely long beautiful sentences, with variable-base rhythms, an endless sound.”

Ginsberg’s piece (in the form of a letter to one Emmanuel Navaretta) is perfectly exploratory, with all the imprecisions and wobble that suggests. What intrigues him is the abstraction of the onslaught, “just composing, bulling along page after page,” processual adventuring. What he keeps refusing (with difficulty) is a definition that writerly abstraction means “not making sense”:

Not meaning to oppose abstract to making sense—but what is abstract in poetry? Pure sound, perhaps (Schwitters & Isou, etc. I don’t know about, scholarly)—tho perhaps they too make sense in context. Artaud’s “tara bulla / rara bulla / ra para hutin . . .” etc. in context is clear crucifixion cry, perfectly clear in context. Or certain elements—rhythm, as in Kerouac; elliptical phraseology as in Corso—and carrying out those to logical conclusions (where, as the circle meets itself, they make common sense also).

Which is likely what Artaud meant by “rara bulla,” no?

Any show of liveliness, or even of life, can be put to ridicule. Note Barney Newman’s screw about a certain kind of painting as the “frenzy-weapon of the hootchy-cootchy dancer.” Offhand he is right, except that history has a way of extracting from the period-style (whatever it may be) that element of the non-temporal, the universal, against which all humor, all jokes flatten and die.

Every style has its vulgarities. To insure against the vulgar manipulations of a style you must insure against life itself. Only “nothing” is safe—absolutely safe.