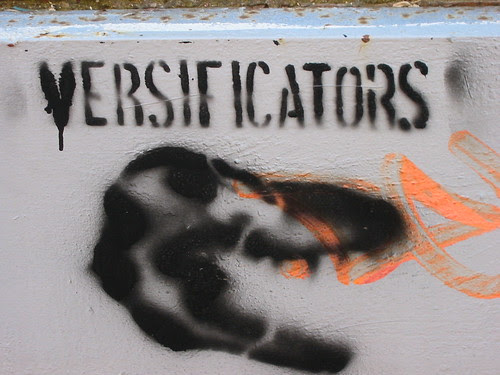 A morning without a canister. That hermetic bullet that contains my words. Trouble-spots in the ether? (The ether is a trouble spot.)

Here’s one: Jordan Davis says: “If only appreciators of New York School bons mots would add more to the effervescence supply.” Contextually void: it lands roughly in the breezeway between pittering about the Bhagavad Gita and pattering about George Saintsbury.

Admonitory in tone, though directed out aimlessly, that is, with no apparent target. There’s a detectable tone of turf-defense (“If only”), legacy-mongering (that tiny sneer in “appreciators”) (Is it only the right citoyens propres of the five burroughs who’re “eligible”—the way bachelors and bachelorettes are—for New York School status?), and a suave assumption that adding to “the effervescence supply” is something associable with the original New York Schoolers.

Unh-uh. I see FO’H—who didn’t suffer Pollyannaisms gladly—with something cattily rebarbative to say about that. I see little JA (in a Prospect of Flowers) “accepting / Everything, taking nothing”—that is, indifferent to effervesce and equinim alike.

Is that to say, the bonest mots sort out of the meanest bots? No, it’s only another tiny cry for—hunh!—clarity?

Reminded, too, of the “stance” of O’Hara—that crumple-up-the-English-Literature-anthologies one of, say, “At night Chinamen jump / on Asia with a thump”—in reading Eugene Ostashevsky’s Iterature (Ugly Duckling, 2005):


I struck rhetorical poses
around me rose various roses

Then I sat down, void of thought and emotion
gas was my only motion

knight and night, Kurd and curd
what l means in the word world

Ostashevsky seems akin here to the O’Hara of the poem beginning “It is 12:10 in New York”: “it is good to be several floors up in the dead of night / wondering if you are any good or not / and the only decision you can make is that you did it / yesterday I looked up the Rue Frémicourt on a map / and was happy to find it flying like a bird over Paris et ses environs / which unfortunately does not include Seine-et-Oise which I don’t know / as well as a number of other things” That swarming insouciance, that self-knowledge that knows its excellence (and simply doesn’t care), that odd tilt up out of nowhere that exposes (briefly) the dead.