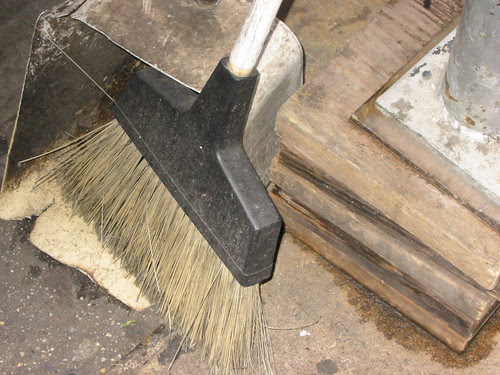 Brush against snare drum—a patter-scratch of things. I’m flipping through Alan Lomax’s The Land Where the Blues Began and bump into Lomax talking to Muddy Waters about the origin of Waters’s song Country Blues. Nothing out of the ordinary in the words—usual (woman) trouble and proposed fix in innuendo, the nudge of the pun presumably subsumed by the (voiced) rawness of the presentation, all of it undergirded by a sense of “authenticity.” A couple of sample verses:

Well, it’s gettin late on the evenin,
I feel like, feel like blowin my horn.
I woke up this mornin, find my
My little easy, my little easy gone.

I b’lieve I’ll go back to Memphis, boys,
Gonna have some of this here hambone boiled.
I done laid round Clarksdale and
I’m bout to let my old, my little old hambone spoil.

And the snatch (si on veut) of interview:

Alan Lomax: Tell me, if you can remember, when it was that you made that blues.

Muddy Waters: I made it about the eight of October in ’thirty-eight.

A.L.: Do you remember where you were, what you were thinking about?

M.W.: Arkansas—I was changing a tire on my car. I had been mistreated by a girl, and it got running in my mind to sing this song. So I just felt blue and the song fell into my mind and come to me just like that and I started singing.

A.L.: Tell me the story of it, if you don’t mind, if it’s not too personal. I want to know the facts of how you felt and why you felt that way.

M.W.: I just felt blue, and the song fell into my mind and came to me and I started singing.

Now, the precision of “the eight of October” against the evasiveness of “fell into my mind” amuses me. Partly I am thinking of Joe Brainard’s goofy report that Ron Padgett says writing a poem is “a deep and mysterious thing nobody understands.” And partly I am thinking about Drew Gardner’s koanish burp about concentrating in lieu of (in attendance of) the poem’s arrival. Isn’t it in the nature of concentrating that if one notes oneself in the throes of it, one is no longer in that particular thrall? Partly I am tempted to sucker-punch a flarfist by suggesting that flarfing don’t allow no reverie-state, no more’n doing the Sunday crossword puzzle do, so why you askin’, no flarf poem never did fall on anybody’s head that way. And partly I am thinking about Lisa Robertson’s mention of Zaha Hadid’s distinction between “random” and “arbitrary.” (“Randomness in architecture is a visual translation of pure mathematical order and thinking which is guided by logic, whereas arbitrariness has no underlying conceptual logic. . . . Arbitrariness has to do with a generation which has been brought up on shopping for ideas. A catalogue exists from which they freely copy anything and apply it with little relevance to any situation.” Thus, Hadid, in 1982.) However—fast and furious—out of the catalogue: Dr. Johnson (Random: “Want of direction; want of rule or method; chance; hazard; roving motion.”) points out that random pokes up into English out of the French randon (elsewhere: “older form randrun; from the French, cf. randir, to run quickly, impetuously; generally taken to be of Teutonic origin and connected with German Rand, edge, brim, the idea being possibly of a brimming river”), related to randonnée, hike, walk. Whereas: arbitrary (Johnson: “1. Despotick; absolute; bound by no law; following the will without restraint. It is applied both to persons and things. 2. Depending on no rule; capricious.”) out of the Latin arbitrarius related to arbiter, the way caprice itself can become a despot. (Or the catalogue can.)

So speaks the riptide of the catalogue. Hadid’s distinction seems to depend on a fixity, a constraint—a strict mathematical random, one way to structure a sample, surely, though not likely to transport one anywhere. (Back to Drew Gardner’s “Staring at the tunnel doesn’t make the train come any faster—or does it?” If achieving an ongoing state of transport is, arguably, the primary pleasure of all writing, I’d wager against systematic or asystematic puttering in the catalogue—flarfing—and for that tunnel-trance. Eventually, brimful, one’ll go all floody, break the bank.)

If I putter along more in the Lomax, though, Muddy Waters’s “fell into my mind” reads a little differently. Turns out the first verse only is “original” to Waters, the other (quoted) is out of Robert Johnson’s earlier Walking Blues. And: “both songs seem to be derived from Gypsy Blues, earlier recorded by Son House.” Fluidity of an oral era. The kind of borrowing that is a nudge of recognition, needs no catalogue. Or one is so steeped in a lingo it percolates up unbid. Brims over. Oi! 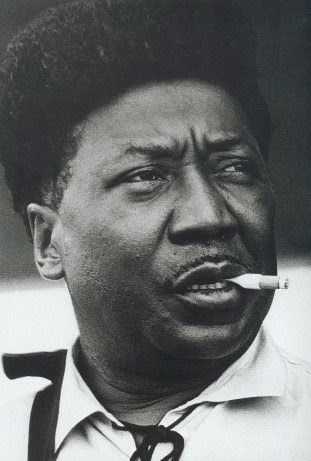