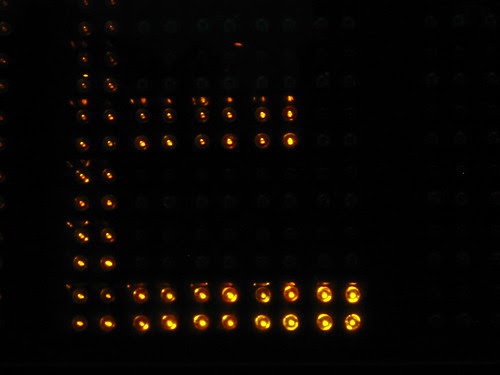 I keep thinking about “Edge, the only unity.” And “Ten or fifteen words organized around two or three marks of punctuation.” Ray DiPalma, in “The Ancient Use of Stone.”

Not sure what to make of Joshua Clover’s Frenchified (“francais comme le février en Finistère,” as Nabokov nearly said) manifesto: first thought: rather dated, rather daft? Dated: It’s a short piece so bespangled by the “late theory” jargoned-up sweat of its exertions, it seems likely to expire, toppling into the shallow-dug pit of its own conclusion. Daft: As if there were a critical bloc (for poetry) worthy the name. Why one ought (or not) be “abashed” by adversarial puffery when there is no honorable opposition is beyond me. Abashed by critical jargon? Straw men fetch straw dogs.

Out here in the big muddy middle, one grows up admonished “not to make a spectacle of oneself.” A spectacle: akin to a tantrum, or a sloppy drunk. A temporary burden (embarrassment) soon shifted off one’s shoulders.

Reify and reification: that’s easy to locate. A steeply-pitched (back) auditorium at Cornell circa 1976, full of the steeply-pitched (forward) professoriat, all leaning expectantly at the good Joe in browns who spoke laboriously about Richard Rodriguez: Frederic Jameson. I am certain that’s where I first encountered the word. I associate it with res publica, no doubt some mnemonic inoculate needled in too recklessly. Thing. Pardonable (or not) public things.

What is the “poem-as-end”? (See, incidentally, yesterday’s Guston remark: the work as “abandoned.”) What is “the catastrophe of instrumental reason that defines Western modernity”? Why, reading that phrase, am I reminded of Mark Strand, a fine, white-haired specimen of a man, handsomely ineffectual. “In a field / I am the absence / of field.” (There was a period when we swooned to that kind of thing, yes.)

I agree, I think, that a poem is unlikely to do anything. Socially or individually (unless one thinks of that momentary pulse-rocket gained by reading some things a doing—(“I” “do” “not”)—the feather-slit of a cloud bisecting the moon’ll just as surely do the like).

Poem as debris of the having-been-done: one end. Processual aftermath, junked. What if, though, a poem (a poet) points continuously toward a desire for revolutionary mayhem? What if one’s poetry founders in a (used up?) verbiage of (call for) abrupt and total change? A poem (a good poem) implicates itself within a way of reading. Is an instruction manual (for reading itself), or folds such material—“ply over ply”—within. Is it admissible then to label that thing a poem-instrument?

Possibility that one’s poem (poetry) mimes all too readily the “current conditions”—that which (somehow) doesn’t replicate the (always) stultifying present is unavailable by definition: no reading manual legible to critic or poet accompanies such a text. That is, the without changes the within, and “art” is (most readily) an unadventuresome tagalong. The art that is not (and it is likely it exists) is invisible—“current conditions” disallow it its visibility.

These remarks a kind of hash. Root out of “hatchet.” Boeuf haché. Any woodcutter knows a hatchet makes a bloody mess, is ineffectual. Useful mostly for lopping limbs off downed trees. Liable to bounce off and nick one.

At the end of Written Lives Javier Marías reads author photographs, a sport not unknown hereabouts in Dittoland. Of the “histrionic” and “not modest” (he compares him to Twain) Nabokov in the photograph below, Marías writes:

. . . he is a joker who prefers not to acknowledge this openly, which is why his expression is one of passion and discovery. He does, however, dare to reveal a pair of hideous or perhaps damaged kmees and to wear a cap inadmissible in someone who never actually became a real American. He is in his Bermuda shorts, pretending to be hunting a butterfly, but his shirt pocket is full of pens or glasses or something: some object inappropriate for a person out hunting. He is already an old man, but this evident not so much from his excited face as from the fact that he is wearing a cardigan. Besides, no one ever bagged anything while standing with one hand on his hips. 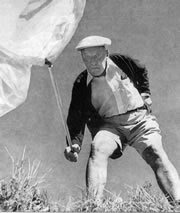