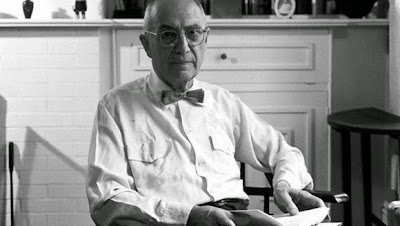 Chomping at the air, at nothing. Besieged by that nothing, its casual unpreparedness. Nevertheless, a sallying out, a “mere improvise” (see Shelley’s remark apropos the verse drama Hellas: “I doubt whether, if recited on the Thespian waggon to an Athenian village at the Dionysiaca, it would have obtained the prize of the goat.”) Out of an essay called “Speech Rhythm” William Carlos Williams submitted to Harriet Monroe’s Poetry in 1913:

No action, no creative action is complete but a period from a greater action going in rhythmic course, i.e., an Odyssey, is rightly considered not an isolated unit but a wave of a series from hollow through crest to hollow. No part in its excellence but partakes of the essential nature of the whole.
This is the conception of the action that I want.
In the other direction, inward: Imagination creates an image, point by point, piece by piece, segment by segment—into a whole, living. But each part as it plays into its neighbor, each segment into its neighbor segment and every part into every other, causing the whole—exists naturally in rhythm, and as there are waves there are tides and as there are ridges in the sand there are bars after bars . . .
Each piece of work, rhythmic in whole, is then in essence an assembly of tides, waves, ripples—in short, of greater and lesser rhythmic particles regularly repeated or destroyed . . .
For practical purposes and for me the unit is of a convenient length, such as may be appreciated at one stroke of the attention. It must not be so small as not to tax the attention, that is, to hold it; it should be in good scale as the architects say . . .
The rhythm unit is simply any repeated sequence of lengths and heights. Upon this ether the sounds are strung in their variety—slipping, clinging, overreaching, triumphing but always going forward even through moments of total disorder in the advance. . . .

Waves : tides :: ridges in the sand : sandbars. Self-similar mechanisms across differing scales. “No part in its excellence but partakes of the essential nature of the whole.” Is Williams’s “Speech Rhythm” pointing to a kind of “fractal verse” avant la lettre? See Alice Fulton’s “Of Formal, Free, and Fractal Verse: Singing the Body Eclectic” (1986), with its “tentative exploration of fractal precepts”:

. . . any line when examined closely (or magnified) will reveal itself to be as richly detailed as was the larger poem from which it was taken; the poem will contain an infinite regression of details, a nesting of pattern within pattern . . . ; digression, interruption, fragmentation and lack of continuity will be regarded as formal functions rather than lapses into formlessness; all directions of motion and rhythm will be equally probable . . .

Harriet Monroe rejected Williams’s essay, “returned it as incomprehensible”—according to Mike Weaver, who found “Speech Rhythm” “uncatalogued among the Viola Baxter Jordan papers” and printed excerpts of it in William Carlos Williams: The American Background (1971). Williams, out of the Selected Letters (1957), writing to Monroe in a letter dated 10 October 1913, presumably regarding the rejected piece:

My dear Miss Monroe: How a thing can be hammered out until it is first perceived is beyond me—but if your editorial judgment is correct—patience.
To me, what is woefully lacking in our verse and in our criticism is not hammered out stuff, but stuff to be hammered out. A free forum, there is the need, which asks only “Is it new, interesting?” I should think, even, that at times you would be concerned lest you get nothing but that which is hammered and worked out—except when the divine Ezra bludgeons you into it.
France is France; we are not France. Would you not rather have anticipated a Lincoln than acclaimed a McMahon?
Figure me, of course, the Lincoln.

My dear Miss Monroe: To tell the truth, I myself never quite feel that I know what I am talking about—if I did, and when I do, the thing written seems nothing to me. However, what I do write and allow to survive I always feel is mighty worth while and that nobody else has ever come as near as I have to the thing I have intimated if not expressed. To me it’s a matter of first understanding that which may not yet be put to words. I might add more but to no purpose. In a sense I must express myself, but always completely incomplete if that means anything. . . .

Williams seeming to work out a processual dialectic, improvisatory, provisional, raw. I think of E. M. Forster’s anecdotal lady who remarks “How do I know what I think until I see what I say?” in Aspects of the Novel (1927). And, too, Forster’s agreeably remarking on Gide’s Les Faux Monnayeurs, its—

. . . proposal that writers should mix themselves up in their material and be rolled over and over by it; they should not try to subdue any longer, they should hope to be subdued, to be carried away. As for a plot—to pot with the plot! Break it up, boil it down. Let there be those ‘formidable erosions of contour’ of which Nietzsche speaks. All that is prearranged is false.

(Shelley again: “I must trespass upon the forgiveness of my readers for the display of newspaper erudition to which I have been reduced.”)
Posted by John Latta at 7:04 AM