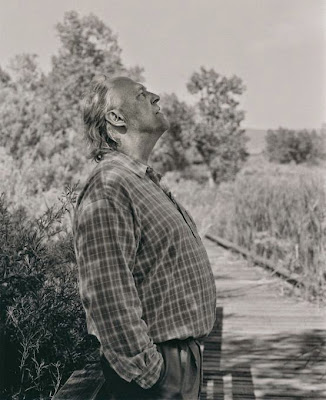 Morning in the shade
of a persimmon tree. Later, downstream
below a hornbeam. A shy man hollers
from across the valley.

Every other rhododendron flower holds
a tiny bee, just the way
each macaroni shell in pasta e fagioli
eventually holds a bean.

Examining the lingo, the paroles: Castenea is the genus name of the chestnut tree, the American chestnut an erstwhile mainstay of the Appalachian slopes; ruficapilla, literally “chestnut-crowned,” species name of the Nashville warbler (Oreothlypis ruficapilla), with its rarely-noted reddish-brown cap; caroliniana, amongst other, commoner, pertinences, being the species name of the American hornbeam (Carpinus caroliniana), another tree native to the Blue Ridge. A whole “radiant node or cluster” there: ch’ing ming, “right naming,” le mot juste. Gilfillan is a master of a certain laconic economy, seeing itself making precise naming’s arrangements: “Black cherry calls the blue.” Too, there’s a kind of wry goofy numinosity, fervor ratcheted down a notch or two, in the “calling” of a line like “Dogwood calls the catbirds.” One senses the mischief in the earlier alignment of bee (in rhododendron flower) with bean (in macaroni shell), the natural world become like pasta e fagioli, mimicking an ordinary homemade thing. (No accident that Gilfillan’s title, Red Mavis, is a regional name—Thoreau knew it—for the brown thrasher, a bird of the Mimidae family, related to the mockingbird.)

To note: parallel to Gilfillan’s plein air sketching (I am thinking here of Kerouac’s use of the term—“everything activates in front of you in myriad profusion, you just have to purify your mind and let it pour the words”) of the adjacency, the (natural) surround,* there’s Gilfillan’s easygoing acceptance of the vagaries of human folly, the inexplicable human world. “Roan Mountain: Vireos Sing Falling Water” begins: “Those men in the valley / shredding lilacs in full bloom— / a little too human?”—and later asks: “Did I ever actually know / a woman named Normandie Beach?” Or there’s the two varieties of riffing of “Daybreak Sky”—a triad of sycamore fancies hinged to a “scratched out” tale of human straits and manners:

Sycamores along the Guyandotte
pretty as a pony: elegant as Appaloosas:
fancy as a rare blond python.

the gentle colors of a burst persimmon.
Coal Miner’s Daughter, scratched out,
then Coal Miner’s Wife.

To note: Gilfillan’s love of the names of things, of places. One part of “Smoky Hill Moon” ends with a kind of litany:

Names tongued and tangible, mouth-material, precise and particular names, names approaching scat (Jelly Roll Morton: “Scat doesn’t mean anything but just something to give a song a flavor.”)

To note: Gilfillan’s sense of fractal scale, deft telescopings. Looking off “Cumberland Mountain” (“a high clear place”): one notes how “bare trees show / the same almost prehensile reach and whorl / as the tuft of lichen riding in your buttonhole.” Or, in one of the “salted haikus” (a lovely flap-copy term, presumably Gilfillan’s own: “salted” with its sense of “cured or preserved” or of “seasoned with wit or good sense”—road and trail incidents put away, conserved, with glints of humor intact), a piece called “Night Sky, Pawnee Creek,” one slips between the brightest star in the constellation Orion and creek: “Rigel leaves a ripple / otter / through black water.” Against such potent miniatures: a series of prose poems, jump-narrative pieces, shotgun memoirs. Here’s one:

One partly cloudy March afternoon in 1978 I stopped at an oyster bar out in the back country of Florida, a well-worn roadhouse about a mile north of Crawfordville on 319. A gaggle of local men were sitting in an open-air, tin-roofed patio with a jug of mud-colored grape homebrew and a dimestore cooler full of oysters. They were shooting pool and passing the jug and shucking Apalachicola sliders. Someone even broke into “The Wabash Cannonball.” I joined them and said I’d driven south a week before from Ohio on the big-river downstream route. Eunice the barmaid was married years ago to a band leader in Cleveland—that put us in the same canoe. We sat there for an hour, beneath the strings of Christmas lights still looped across the roof beams. When we ran out of saltines for the oysters, Rodney went out to his truck and brought in a box of coconut cookies. His son was passed out dreamily across the seat of the cab . . . Such a thing. Such a thing as a mural for the day, weak gesso on old stucco for the simple Dionysian high-note of it: for the a capella laughter and the buds of clouds and the intermittent song, the accidental brackish sheen of salt and sugar on the mutual tongue.

“For the simple Dionysian high-note of it . . .” There’s no little sense and evidence of sheerly celebratory offices in Red Mavis, lauds and praises for the earth and its doings and inhabitants, noted with fond particularity, tender clarity, kindly acceptance: “Barmy old rattlesnake / lazes through / chicory blue . . .” (out of “R.I.P. Mary Fly”). Or: “Raucous wind, ratty clouds— / what the cat dragged in.” (out of “The Road to Jupiter”). The pleasure in modestly offering an approbatory something, not much. Here’s “Gift Horse”:

Toss a crust
for the quiet hermit thrush, sipping
the last of the garden:

fallen eggplant, soggy squash—
pretty much the same ratatouille
we had for lunch.

think along that cut of dream
the other night: “On a Greyhound
or a train,” talking
with an unfamiliar woman to my right.

We gradually unravel her privy news
as crows slip by: D. H. Lawrence
still alive, living far off in remote
seclusion—a jitney, then a mule—

We call for sherry, polished
walnuts, full pilgrimage.
Jets camouflaged sky-blue go over
in a fit of rage.