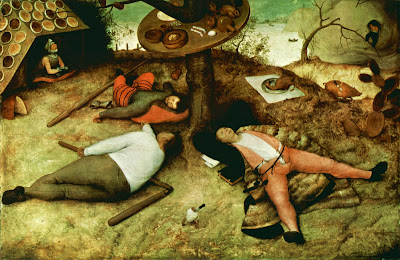 Lazy morning. “Your lasy bones I pretende so to blisse, / That you shall haue small luste to prate any more.” Blisse meaning “wound.” Lazy turning to fret. That “small luste to prate any more”—whithersoever it cometh? Soonest mended, soonest—what?—ended? (Recall the Ashbery: “To reduce all this to a small variant, / To step free at last, minuscule on the gigantic plateau— / This was our ambition: to be small and clear and free.”) Somewhere beyond the constant yammering, its insobriety and its inconsequence. One no longer trusts the impertinent quotidian thrust, beleaguered by it, chafed by it. Too insistently of late: every word a loss of world. Williams (epigraph to “Excerpts from a Critical Sketch”):

Poetry? Words: figments of the mind, of no real substance.
What more then is light? It is precisely a figment of the mind if the apprehension of it be our consideration.
But it is an emanation consequent on microscopic action in the sun.
Then words are the same, call the microscopic action which is their source ‘Socrates’ or what you will.

Or recall Hart Crane (out of “Chaplinesque”): “We make our meek adjustments, / Contented with such random consolations / As the wind deposits / In slithered and too ample pockets. / / For we can still love the world . . .” Every music a muffling. Williams again—out of a letter to Pound dated “June, 1932” (Selected Letters):

I’ve been playing with a theory that the inexplicitness of modern verse as compared with, let us say, the Iliad, and our increasingly difficult music in the verse as compared with the more or less downrightness of their line forms—have been the result of a clearly understandable revolution in poetic attitude. Whereas formerly the music which accompanied the words amplified, certified and released them, today the words we write, failing a patent music, have become the music itself, and the understanding of the individual (presumed) is now that which used to be the words.
This blasts out of existence forever all the puerilities of the dum te dum versifiers and puts it up to the reader to be a man—if possible. There are not many things to believe, but the trouble is no one believes them. Modern verse forces belief. It is music to that, in every sense, when if ever and in whoever it does or may exist. Without the word (the man himself) the music (verse as we know it today) is only a melody of sounds. But it is magnificent when it plays about some kind of certitude.

With no belief, no certitude. With no certitude, no magnificence. And a sense that “our” humdrum pervasive “inexplicitness” is now the equal to Williams’s “puerilities of the dum te dum versifiers.” Impolitic publicly to admit. See the satirist Nicholas Amhurst (1697-1742), out of “The Inscription, Which Was Lately Found on a Large Marble Pillar Amongst Some Ruins at Whitehall,” docking us all: “His poor fallacious, tinsel Eloquence / Tickled the Ear, but ne’er inform’d the Sense; / Whilst every plausible Harangue affords / A specious, empty, puzzling Rote of Words.” Whither the deft unappeasable music that turns one to the world?
Posted by John Latta at 7:19 AM