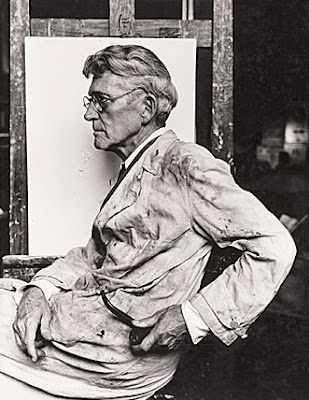 Back across the rain-bothered stretches of Pennsylvania, across the cloud-tamped flats of Ohio, the fling of percept lulled by the wheel. John Sloan: “Study cloud formations. Don’t be satisfied with rococo, Spencerian clouds. Observe the flat bottoms of heavy rain clouds, the fine patterns of mackerel skies.” Too few hawks.

A cumulus of notes (or a ragout):

John Sloan (off a placard at the Parrish Art Museum): “Instead of imitating the colors in nature, I decided on some quality of color that interested me and set a limited palette.”

Hudson River overlook near Bear Mountain: a pileated woodpecker knifing into the rust-colored canopy below. “Order quiets the mind.”

Rusty blackbird on a telephone wire.

And, out of a paucity of reading, Thomas De Quincey’s remark—originally in an 1839 piece called “Lake Reminiscences, from 1807 to 1830: No. 1. William Wordsworth” written for Tait’s Edinburgh Magazine:

I resembled Wordsworth—namely, that in early youth I laboured under a peculiar embarrassment and penury of words, when I sought to convey my thoughts adequately upon interesting subjects: neither was it words only that I wanted; but I could not unravel, I could not even make perfectly conscious to myself, the subsidiary thoughts into which one leading thought often radiates; or, at least, I could not do this with anything like the rapidity requisite for conversation . . . and thus partly—partly also from my invincible habit of reverie—at that era of my life, I had a most distinguished talent ‘pour le silence.’” Adding that Wordsworth, suffered “pretty much the same infirmity.

How many writers (believe, rightly in some cases, they) cannot talk. (I think of Nabokov who, in the “Foreword” to the book of interviews, Strong Opinions (1973), writes: “I think like a genius, I write like a distinguished author, and I speak like a child. . . . At parties, if I attempt to entertain people with a good story, I have to go back to every other sentence for oral erasures and inserts.”) How odd, hence, that Wordsworth ought so famously to call for a poetry of “a man speaking to men.” And that that ought to become a mark of writerly authenticity (see William Carlos Williams, in “Excerpts from a Critical Sketch”):

We seek a language which will not be at least a deformation of speech as we know it—but will embody all the advantageous jumps, swiftnesses, colors, movements of the day—
—that will, at least, not exclude language as spoken—all language (present) as spoken.

Humph. Suppose the “advantageous jumps, swiftnesses, colors, movements” occur but rarely under the barking regime of repartee, and never amongst the watchdog tutelage of études conversationnelles? Suppose language’s very recklessness and fluidity is at the behest of the silent page?
Posted by John Latta at 6:16 AM