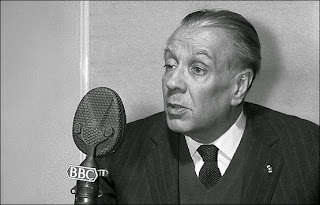 Fickle tenuity of each new writerly onslaught: how readily morning’s jumpy megrimish light would white it all out. An æther monologue, demur as a scruple. “The way music passes, emblematic / Of life and how you cannot isolate a note of it / And say it is good or bad.” (Ashbery, “Syringa”). Borges, lecturing in 1966, notes a “book about Browning . . . that Chesterton published . . . in the year 1907 or 1909 . . . part of that admirable series, English Men of Letters:

Reading a biography of Chesterton, written by his secretary, Maisie Ward, I read that all of Chesterton’s quotations of Browning in the book were wrong. But they were wrong because Chesterton had read Browning so much that he had learned him by heart. And he had learned it so well that he had not needed to consult Browning’s work a single time. He was wrong precisely because he knew it. It is a pity that the editor of the series, English Men of Letters, Virginia Woolf’s father, Leslie Stephen, reinstated the original text. It would have been interesting to compare Browning’s original text to how they appear in Chesterton’s text. Unfortunately, they were corrected, and the printed book contains Browning’s texts. It would have been lovely to know how Chesterton transformed in his memory Browning’s verses—for memory is also made up of forgetting.

Out of the Martín Arias and Martín Hadis-edited Professor Borges: A Course on English Literature (New Directions, 2013), translated by Katherine Silver. Borges’s breezy and companionable talk. Borges on Coleridge:

Coleridge studied at Christ Church, where his classmate was Charles Lamb, who wrote a description of him. He then attended Cambridge University, where he met Southey, and there they planned to found a socialist colony in a remote and dangerous region of the United States. Then, for some reason that has never been fully explained, but is just one of the many mysteries that constitutes Coleridge’s life, Coleridge enlists in a regiment of dragoons. “I am,” as Coleridge said, “the least equestrian of men.” He never learned to ride a horse. After a few months, one of the officers found him writing poems in Greek on one of the barrack walls, poems in which he expressed his despair at his impossible fate as a horseman, which he had inexplicably chosen. The officer spoke with him and managed to have him released. Coleridge returned to Cambridge and shortly thereafter planned to establish a weekly journal. He traveled around England looking for subscribers for this publication. He recounts that he arrived in Bristol, spoke with a gentleman, that this gentleman asked him if he had read the newspaper, and he answered that he did not believe that one of his duties as a Christian was to read the newspaper, which caused no small amount of hilarity, because everyone knew that the purpose of his trip to Bristol was to engage subscribers for his publication. Coleridge, after having been invited to join a conversation, took the strange precaution of filling half his pipe bowl with salt and the other half with tobacco. In spite of this, he became ill, as he was not in the habit of smoking. . . .

(The editors point out—“memory is also made up of forgetting”—that “Coleridge studied at Christ’s Hospital, not at Christ Church.”) Borges:

Coleridge’s conversations were very unusual. De Quincey, who was a disciple and admirer, said that each time Coleridge talked, it was as if he were tracing a circle in the air. In other words, he went further and further away from the subject he had started with, then returned to it, but very slowly. Coleridge’s conversation could last for two or three hours. At the end, it was discovered that he had traced a circle, returning to the point of departure. But usually his interlocutors would not have lasted that long and would have left. So they carried away the impression of a series of inexplicable digressions.

See Thomas De Quincey’s lines on Coleridge originally appearing in 1834 in the pages of Tait’s Edinburgh Magazine (under the title and byline “Samuel Taylor Coleridge. By the English Opium-Eater.”), later collected under the title Recollections of the Lakes and the Lake Poets (1862). De Quincey:

Coleridge, like some great river, the Orellana, or the St. Lawrence, that had been checked and fretted by rocks or thwarting islands, and suddenly recovers its volume of waters, and its mighty music,—swept at once, as if returning to his natural business, into a continuous strain of eloquent dissertation, certainly the most novel, the most finely illustrated, and traversing the most spacious fields of thought, by transitions the most just and logical, that it was possible to conceive. What I mean by saying that his transitions were “just,” is by way of contradistinction to that mode of conversation which courts variety through links of verbal connexions. Coleridge, to many people, and often I have heard the complaint, seemed to wander; and he seemed then to wander the most, when in fact his resistance to the wandering instinct was greatest,—viz. when the compass, and huge circuit, by which his illustrations moved, travelled farthest into remote regions, before they began to revolve. Long before this coming-round commenced, most people had lost him, and naturally enough supposed that he had lost himself. They continued to admire the separate beauty of the thoughts, but did not see their relations to the dominant theme.

What’s curious is that Coleridge’s conversation has been preserved, as was Johnson’s; but when we read Boswell’s pages—those pages full of epigrams, those short and clever sentences—we understand why Johnson was so admired as a conversationalist. On the contrary, the volumes of Table Talk—of Coleridge’s after-dinner conversations—are rarely admirable. They abound in trivialities. . . .*

I could write as good verses now as ever I did, if I were perfectly free from vexations, and were in the ad libitum hearing of fine music, which has a sensible effect in harmonizing my thoughts, and in animating and, as it were, lubricating my inventive faculty. The reason of my not finishing Christabel is not that I don’t know how to do it; for I have, as I always had, the whole plan entire from beginning to end in my mind; but I fear I could not carry on with equal success the execution of the Idea—the most difficult, I think, that can be attempted to Romantic Poetry—I mean witchery by daylight. I venture to think that Geraldine, so far as she goes, is successful—but I doubt any one being able to go much farther without recourse to some of the common shifts. Besides, after this continuation of Faust, which they tell me is very poor, who can have courage to attempt a reversal of the judgment of all criticism against Continuations? Let us except Don Quixote, however—although the continuation is not uno flatu with the original conception.
Some music is above me; most music is beneath me. I like Beethoven, Mozart, or some of the aerial compositions of the elder Italians, as Palestrina &c. And I love Purcell.