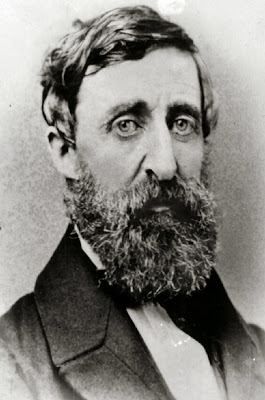 Robert Duncan, somewhere in The H. D. Book, quoting William Carlos Williams: “Knowledge, the contaminant.” Williams, in a letter to Ezra Pound (8 July 1946), quoting John Dewey: “Vital and thorough attachments are bred only in an intimacy of intercourse which is of necessity restricted in range.” McKenzie Wark, somewhere in A Hacker Manifesto, quoting Georges Bataille: “The history of life on earth is mainly the effect of a wild exuberance, the dominant event is the development of luxury, the production of increasingly burdensome forms of life.” Thoreau, of whom Henry James, simply unable to comprehend willed attenuation of any sort, wrote that “he suffers something of the amoindrissement of eccentricity,” noting famously that “life is frittered away by detail” and urging men to “simplify, simplify.” Questions of focus and scope. Thoreau’s stubborn rectitude of a self uncompomised and full of its contradictory ways. (Hawthorne, in a letter to Evert Duyckinck, whilst, too, touting Thoreau’s “great qualities of intellect and character”: “He is the most unmalleable fellow alive—the most tedious, tiresome, and intolerable—the narrowest and most notional . . .”) So, against routine humdrum simplicity Thoreau cautions (Journal, 26 December 1860):

To such a pass our civilization and division of labor has come that A, a professional huckleberry-picker, has hired B’s field and, we will suppose, is now gathering the crop, perhaps with the aid of a patented machine; C, a professed cook, is superintending the cooking of a pudding made of some of the berries; while Professor D, for whom the pudding is intended, sits in his library writing a book—a work on the Vaccinieæ, of course. And now the result of this downward course will be seen in that book, which should be the ultimate fruit of the huckleberry-field and account for the existence of the two professors who come between D and A. It will be worthless. There will be none of the spirit of the huckleberry in it. The reading of it will be a weariness to the flesh. To use a homely illustration, this is to save at the spile but waste at the bung. I believe in a different kind of division of labor, and that Professor D should divide himself between the library and the huckleberry-field.

Vaccinieæ: the “blueberry tribe.” (Emerson, in the “Eulogy” saying of Thoreau: “I cannot help counting it a fault in him that he had no ambition . . . instead of engineering for all America, he was the captain of a huckleberry party.”) Complexity’s measure maintained by participating throughout. So, the demand one steer clear the trappings of “stereotyping” (a printing method using a solid plate of type-metal) so singular and inutile a thing as a poem, mere processual-debris of the human-making (A Week on the Concord and Merrimack Rivers):

The true poem is not that which the public read. There is always a poem not printed on paper, coincident with the production of this, stereotyped in the poet’s life. It is what he has become through his work. Not how is the idea expressed in stone, or on canvas or paper, is the question, but how far it has obtained form and expression in the life of the artist. His true work will not stand in any prince’s gallery.

Though, just prior, Thoreau’s hymned the grandeurs and exigencies of prose in somewhat monumental terms, the author-manikin yielding to a stabler thing:

Great prose, of equal elevation, commands our respect more than great verse, since it implies a more permanent and level height, a life more pervaded with the grandeur of thought. The poet often only makes an eruption, like a Parthian, and is off again, shooting while he retreats; but the prose writer has conquered like a Roman, and settled colonies.

In a letter to Daniel Ricketson (18 August 1857), Thoreau’s “eruption” is an expulsion whole, unniggled, peremptory, flash: “As for style of writing, if one has anything to say, it drops from him simply and directly, as a stone falls to the ground. There are no two ways about it, but down it comes, and he may stick in the points and stops whenever he can get a chance. New ideas come into the world somewhat like falling meteors. With a flash and an explosion, and perhaps somebody’s castle-roof perforated. To try to polish the stone in its descent, to give it a peculiar turn, and make it whistle a tune, perchance, would be of no use, if it were possible.” Compare that to Thoreau’s Journal-entry of 28 February 1841:

Nothing goes by luck in composition. It allows of no tricks. The best you can write will be the best you are. Every sentence is the result of a long probation. The author’s character is read from title-page to end. Of this he never corrects the proofs. We read it as the essential character of a handwriting without regard to the flourishes. And so of the rest of our actions; it runs as straight as a ruled line through them all, no matter how many curvets about it. Our whole life is taxed for the least thing well done; it is its net result. How we eat, drink, sleep, and use our desultory hours now in these indifferent days, with no eye to observe and no occasion to excite us, determines our authority and capacity for the time to come.

An entry ransacked in the writing of A Week on the Concord and Merrimack Rivers. Wherein one reads:

A man’s whole life is taxed for the least thing well done. It is its net result. Every sentence is the result of a long probation. Where shall we look for standard English, but to the words of a standard man. The word which is best said came nearest to not being spoken at all for it is cousin to a deed which the speaker could have better done.

Pertinent, too, the lines in a letter to Harrison Blake (16 November 1857), suggesting “a theme,” that Blake “state . . . precisely and completely what that walk over the mountains amounted to”:

Don’t suppose that you can tell it precisely the first dozen times you try, but at ’em again, especially when, after a sufficient pause, you suspect that you are touching the heart or summit of the matter, reiterate your blows there, and account for the mountain to yourself. Not that the story need be long, but it will take a long while to make it short.

Discordance of method and aim un peu partout. Dialectical envy in the woods. Still, the soaring comes unfettered and seemingly unaccoutered: “Still we live meanly, like ants; though the fable tells us that we were long ago changed into men; like pygmies we fight with cranes; it is error upon error, and clout upon clout, and our best virtue has for its occasion a superfluous and evitable wretchedness. . . . An honest man has hardly need to count more than his ten fingers, or in extreme cases he may add his ten toes, and lump the rest. Simplicity, simplicity, simplicity!”