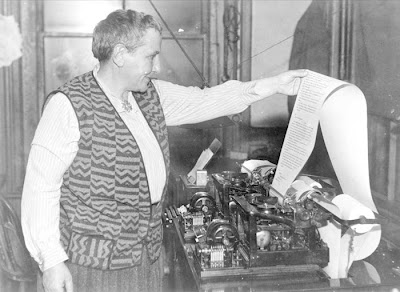 A good thing, some days, to come at it unprepared. (Gertrude Stein: “Nothing I like more than when a dog barks in his sleep . . . How much does he know that he is barking.”) That longing to write in one’s sleep, words expelled in all vicissity without the retardant viscosity (or urbane velleity) of reason (or reasonableness)—expelled in a brash “nativity of everness.” To feed off the soup of unsorted vocables that sloshes full, daily, in the tureen of being, that unforesought and unforesold aliment. Words—paragraphs—pulled up out of the reliably uttering ticker tape. Or, stuck in a reverie of murth’rous discordance, all song quashed, all “dingy twaddle” stymied by something like a Pleistocene white-out, some untongued glacial push across the word-teeming savannahs: the nada look, in tenebre e in oscurità—what Beckett translated by “bored to extinction.” See, too, Thoreau’s pertinent Journal-note (26 January 1858):

Some men have a peculiar taste for bad words, mouthing and licking them into lumpish shapes like the bear her cubs,—words like “tribal” and “ornamentation,” which drag a dead tail after them. They will pick you out of a thousand the still-born words, the falsettos, the wing-clipped and lame words, as if only the false notes caught their ears. They cry encore to all the discords.

Twaddle, the discordant, the flub, the shill, the blank: all the intrusory mitigants against the superfluidity of the ongoing occasion, the unruddered endless drift and impetus of pure saying. Surely William James, who claimed man defined himself against the beasts in the “exuberant excess of his subjective propensities”—“Had his whole life not been a quest for the superfluous, he would never have established himself as inexpugnably as he has done in the necessary. . . . Prune down his extravagance, sober him and you undo him”—surely James might agree that all writing is slipshod, piecemeal, saltatory, wrought and incomplete. Still, the unvented fundament compels it, and the hortatory go.

Add an obligatory “bah” to the preceding. Off for a week or so. “That’ll be a relief.”