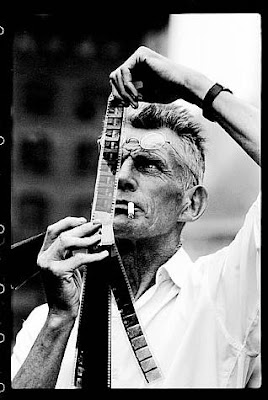 A nigh simultaneity. Poking around in a book of Dorothea Lange photographs, I read Lange’s unabashedly pragmatic formula: “The camera is an instrument that teaches people how to see without a camera.” And consider, briefly, how that “seeing” is apt and liable to become a captious bludgeon of seeing, how one begins to see only what some prior camera’s selected for seeing. Doxa of the lens. And, later in the day, the shiny black night’s radiant aimlessnesses convened, the distraught road assuaged (I like to think) by my newly Hanook’d wheels, home, the tenably live succors of a book writhing in hand, I read in Charles Juliet’s Conversations with Samuel Beckett and Bram van Velde (Dalkey Archive, 2009), Bram van Velde saying: “Painting is an aid to vision. It turns life, the complexity of life, into something visible. It reveals things that we don’t know how to see.”

I recall what Beckett (in a 1937 letter to Thomas McGreevy) reported of reading Schopenhauer (“like suddenly a window opened on a fug”). Here, according to Beckett: “a philosopher that can be read like a poet, with an entire indifference to the a priori forms of verification.” How attain that wild unravaged “indifference to the a priori”? Without it, one merely writes what one reads (Juliet writes of Beckett: “When he started writing, he stopped reading, believing that the two activities were incompatible.” Beckett: “I had to reject all the poisons . . .” And, admitting, glee-repressedly: “Yes, there was a kind of indecency—ontological indecency.” And: “Up until 1946 I tried to learn as much as possible in order to try and have some degree of power over things. Then I realized I was following the wrong path. But perhaps all paths are wrong.” And: “I have never studied anything in depth.”) Par contra, there’s Beckett’s hollow-voiced remark, ruining the idyll of the naïf: “Listening to yourself, it is not literature that you hear.” (Or, one succumbs to add, listening to—recording—the insipid hubbub of the cyber-screech. Not literature.)

No reading. No eavesdropping the interior / exterior voices. Whence, then, the materiel? Bram van Velde (whom Juliet quotes as saying: “I am a watered-down being”): “You can’t control anything. What you have to do is let yourself be taken over. . . . All the paintings I have made, I was compelled to make.” (One recalls a ravenous period of reading through countless sheaves of the current poetry-detritus, repeatedly noting how none of it showed any sign of writerly compulsion beyond that of “expected productivity.”) Beckett talks of “submitting to the unintelligible.” One thinks of the “via negativa.” And, apropos Beckett’s rejected reading, notes a reply to Juliet’s asking if he rereads the mystics—“Saint John of the Cross, Meister Eckhart, Ruysbroeck.” Beckett answers, apparently haltingly: “Yes . . . I like . . . I like their . . . their illogicality . . . their burning illogicality—the flame . . . the flame . . . which consumes all our filthy logic . . .”

One bout of activity (Juliet’s entry dated 11 November 1977). Beckett animatedly pushing aside drinking glasses, light, metal box of small cigars, &c. at the café table in order to detail a one minute play, invention of the previous night’s insomnia:

“One human being, standing silent, motionless, Slightly to the rear, almost offstage.” He points to a place on the table which stands for the stage. “Everything takes place in twilight. Someone else enters. He steps forward. Slowly. He notices the character standing motionless. He stops in wonder.
“‘Are you waiting for someone?’
“The other one shakes his head no.
“‘For something?’
“Same answer.
“After a few seconds he continues on his way.
“As he does, the other one asks:
“‘Where are you going?’
“‘I don’t know.’”

Beckett: “Everything in this damned world calls for indignation . . . But as far as work goes . . . What can be said? Nothing is sayable.” A certain lethargy and greed of lethargy. Today locates itself between the Beckett at the end of the second of the “Three Dialogues” with Georges Duthuit—who, to Duthuit’s plaintive “Are we really to deplore the painting that is a rallying, among the things of time that pass and hurry us away, towards a time that endures and gives increase?” make the non-reply of “(Exit weeping.)”—and the “mal armé” Beckett at the beginning of the third dialogue who sings out: “Frenchman, fire first.”