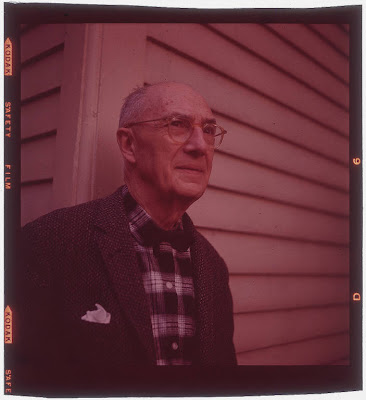 Williams Carlos Williams—“Just finished Ulysses . . .”—writes to Ezra Pound (15 August 1922) with “one comment”: “It encourages me to champion my own particular form of stupidity.” Likely he’s talking of The Great American Novel (1923):

It is Joyce with a difference. The difference being greater opacity, less erudition, reduced power of perception—Si la sol fa mi re do. Aside from that simple, rather stupid derivation, forced to a ridiculous extreme. No excuse for this sort of thing. Amounts to a total occlusion of intelligence. Substitution of something else. What? Well, nonsense. Since you drive me to it.

That “you” being Pound himself. Who’s carped / harrumphed some years earlier about Williams’s “opacity” (10 November 1917: “The thing that saves your work is opacity, and don’t you forget it. Opacity is NOT an American quality. Fizz, swish, gabble and verbiage, these are echt Amerikanish . . .”) and who’s (12 September 1920) spluttered out against Williams’s Kora in Hell: “what the French real reader wd. say to your ‘Improvisations’ is / Voui, c(h)a j(h)ai deja (f)vu c(h)a c(h)a c’est de R(h)imb(h)aud,” the finicky typing required to capture that wholly indiscernible accent effectively thwarting whatever oomph Pound intended by the remark. (Williams worries the slight, though, and repeats it in The Great American Novel: “Take the improvisations: What the French reader would say is: Oui, ça; j’ai déjà vu ça; ça c’est de Rimbaud.” Adding trenchantly enough: “Representative American verse will be that which will appear new to the French . . . . prose the same.”) For Williams, Joyce’s “real, if hidden, service” is—interminable struggle against the ever-shifting doxology of “literature”—in seeing that the art “consists of words”: “He has in some measure liberated words, freed them for their proper uses. He has to be a great measure destroyed what is known as ‘literature.’”* Thus Williams’s exchange:

That’s all very fine about le mot juste but first the word must be free. —But is there not some other way? It must come about gradually. Why go down into hell when— Because words are not men, they have no adjustments that need to be made. They are words. They can not be anything but free or bound. . . .
The word is the thing. If it is smeared with colors from right and left what can it amount to?

The purely material word. Emphatically put in Williams’s piece called “Marianne Moore” (1925) wherein he talks of Moore’s “wiping soiled words or cutting them clean out, removing the aureoles that have been pasted about them or taking them bodily from greasy contexts”:

With Miss Moore a word is a word most when it is separated out by science, treated with acid to remove the smudges, washed, dried and placed right side up on a clean surface.

Making of the word a curiously empty vessel—rather like an impertinently fillable form, like the Williams-detested sonnet. Williams says such an acid-washed word “may be used to smear it again with thinking (the attachments of thought) but in such a way that it will remain scrupulously itself, clean perfect, unnicked beside other words . . .” All somewhat mystical—extremity ever is—a way of making a clearing, a zero point against the stylishly “literary” (Williams calls the era’s “usual ‘poem’” a “commonplace opaque board covered with vain curlicues”—a definition fit for exhuming, apt for some of “our” own gewgaws . . .)

* Note, too, the lines—“But Joyce. He is misjudged, misunderstood. His vaunted invention is a fragile fog. His method escapes him. He has not the slightest notion what he is about. He is a priest, a roysterer of the spirit. He is an epicurean of romance. His true genius flickers and fails.” Is Williams out to “do the police in different voices” here, or is that to be read as sincerely “against method,” all art “advancing” by unremittent brave goofing off?