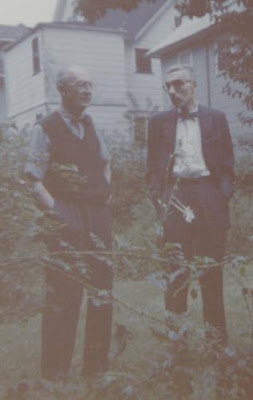 William Carlos Williams, in a letter to Louis Zukofsky (25 July 1928): “Perhaps by my picayune imagistic mannerisms I hold together superficially what should by all means fall apart.” Out of the Barry Ahearn-edited Correspondence of William Carlos Williams and Louis Zukofsky (Wesleyan, 2003). That tremendous doubt at the heart of the juxtaposed, its lightning rod, what pulls the heavens—flying asunder (isn’t that the definition of the heavens, colossal, sundry, electric?) down into it. Doubt that animates the aligning of any rapturous (ruptured) dissilients: “Two ymages huge, of disparayl fourme.” Doubt that vivifies the mash-up. There’s that, the teetering skepticism of one’s own “violent torsions.” A note in the Correspondence points to four Zukofsky poems printed in a 1928 issue of The Dial (LXXXV: 12), with the comment that only two reappear in Zukofsky’s Collected Shorter Poems. (Williams, responding to the news of Zukofsky’s Dial acceptance, praises editor Marianne Moore—“willing but . . . suffers from the terrific weight of indifference under which all labor in these here United States just as we do”—and advises Zukofsky: “All the good that comes from such a success is . . . the cash you will pocket. The Dial to me is about as dead as a last years birds nest. One must believe in spiders—”) So, I looked the poems up. The two retained in the Collected Shorter Poems: “tam cari capitis” (lacking, in The Dial, its second part) and “Song Theme (to the last movement of Beethoven’s Quartet in C-sharp Minor).” The discarded, two untitled sonnets:

Someone said, ‘earth, bowed with her death, we mourn
Ourselves, our own earth selves,’—yet for me crept
Rattling a small wind bitter, and I wept
But your own little form that might be torn.
And suddenly I could see your face borne
Like the moon on my sight, it had not slept
But looked, as once, at rest though waking, stepped
To the grave peace of death and not yet worn.

‘Look at the moon,’ you said: ‘Those are no tears
Falling, unclasped through space, for what appears
Dead crater sheds no tears.’ And your face form
Where it came vanished, so I was too soon
Oblivious among the wind, the moon
Clouding then, her high dissolution come.

The silence of the good that you were wrought of,
Do I find it transformed by some strange leaven
From you to earth only my earth knows aught of,
And know it silent mound outlined on heaven,
Till all the life of you in our still room
Returns to me—your presence past the wall
Of death, the confines of your dark? So fall
Death’s guerdon to me neither sun nor gloom;

But quiet—your silence, when you would stir
With me—its being, what you are and were.
It cannot change though it must change the mode—
Not with you living, but with you dead to darkle—
Yet is no less obliged thus to corrode
In earth with you—earth, shadow of your sparkle.

Williams, pertinently: “Eyes have always stood first in the poet’s equipment. If you are mostly ear—a new rhythm must come in more strongly than has been the case so far.” (Oddly prescient of Zukofsky’s later Bottom-formulation that “speaks and sings of a proportion: love is to reason as the eyes are to the mind; or, says it so that means equal extremes: when reason judges with eyes, love and mind are one.”) If I mostly drowse unplucked by the discards, I do admire the paradox of the moon’s sudden clarity at the very moment of its clothing: “the moon / Clouding then, her high dissolution come”—the long i of “high” tossing the mind’s eyes skyward, up out of the tender earth’s rubble and occlusion. Too, the rhythmic awkwardnesses of foundering speech in “The silence of the good that you were wrought of” begins a jaunty and complex delivery finally unmade. (Reading the discards, one is tempted to quote Zukofsky’s own line out of “An Objective” (1930, 1931): “The disadvantage of strained metaphor is not that it is necessarily sentimental (the sentimental may at times have its positive personal qualities) but that it carries the mind to a diffuse everywhere and leaves it nowhere.”) One notes that Zukofsky’s wife Celia Thaew reported that Zukofsky’d “said he’d written and discarded 500 poems”:

A manuscript at Texas under the name of Dunn Wyth is Louie’s work. He called the poems “juvenilia” and he wanted never to be reminded of it. He wanted to throw it out. But I said that would be foolish and he ought to send it on to Texas since another name was on it. Nobody would find out who Dunn Wyth was. It would make a nice little problem for scholars.

Or allow it its unburdening reprieve: “enter it not into your Audit, nor account that amongst your Supers, which is your Onus.”