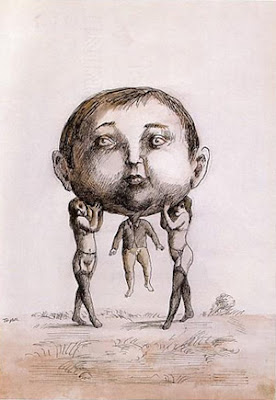 A new number (N° 23) of Context, a sort of “house organ” of the redoubtable Dalkey Archive Press—standard bearer against know-nothingism and literary provinciality in these States—is out. Included, among interviews with Slovenian writer Boris Pahor (Necropolis) and the Swiss-Italian Giovanni Orelli (Walaschek’s Dream) is a piece called “How I Write” by Viktor Shklovsky, translated by Adam Siegel:

. . . Creation in general and the creation of a new literary style in particular often arise when a chance mutation takes hold. More or less like what happens with the development of a new breed of cattle.
. . .
I write beginning with facts. I try not to modify facts. I try to link disparate facts. I may have gotten this from Lomonosov—the juxtaposition of disparate ideas—or it may come from Anatole France, banging the heads of epithets together.
. . .
I begin a work by reading. I read without trying to strain myself. Rather, I try not to commit things to memory. The strain, the attentiveness—they simply get in the way. One should read serenely, just looking at the book . . .

Too, “100 Good Reasons to Kill Myself Right Now,” by Roland Topor, translated by Edward Gauvin (with reason N° 1: “Best way to make sure I’m not dead already”). Too, there’s an excerpt (translated by Aaron Kerner) called “On Noise and Racket” by Arthur Schopenhauer (out of “the great post-Kantian pessimist’s 1851 collection of essays, Parerga and Paralipomena”) lamenting “the pain occasioned by noise” (Schopenhauer’s particular bête noire appears to be the “abrupt, piercing, brain-shredding, thought-murdering cracks” of the whips of hack-drivers):

For my part, I construe the matter thus: as the value of an enormous diamond smashed to pieces is reduced to that of so many slivers; or as an army, if it scatters—that is to say, dissolves into tiny bands—is rendered impotent; so a great mind is likewise reduced to the commonplace as soon as it has been interrupted, violated, scattered, diverted; for its superiority is conditional on all of its strength—like a convex mirror all its beams—being focused on a single point and object, and precisely in this is it thwarted by clamorous interruption.

And a Craig Dworkin-assembled “catalog of works of silent music”—titled “Unheard Music” and beginning with fictioneer (“best known for pioneering fiction structured on holorhymes”) Alphonse Allais’s 1897 Marche funèbre pour les funérailles d’un grand homme sourd (“Funeral March for the Obsequies of a Deaf VIP”), precursor to John Cage’s 4’33”. (Of the latter, Dworkin writes: “Not to be confused with either the showier 0’00” (1962), “to be performed in any way by anyone” “in a situation provided with maximum amplification” or the watered-down Tacet (1960), which “may be performed by (any) instrumentalist or combination of instrumentalists and last any length of time.”) A piece of Emmanuel Hocquard’s called “Ma Vie Privée” (out of Hocquard’s 2001 collection Ma haie: Un privé à Tanger 2 (P.O.L), a thing I keep desultorily rendering, gets a partial airing, too:

14. Literature is a machine to produce Literature, not thinking, not critique. In order to study, or to critique, I have no need of Literature. No more than I do philosophy. To tell the truth, for thinking, nobody needs it. I have no need of Literature for critical thinking, but I need to think critically about Literature seeing as how I’ve so imprudently fallen into it. To think critically about Literature is not a way to make it; it’s a way to remove it, to rub it out, to undo it. And, by doing so, remove it in me, undo it in me, rub a hole in the paper of my faults. I’m in the camp of the chicken and the cow, but I think about what the little girl reads. About how there’s something a little suspect in what she reads.

15. Nevertheless, you’ll say, you write. And you publish the things you write. I write. I write out of a need to think. That’s how I’m made. I need to think by writing. For myself. I myself am the one who’s addressed, not my reader. Olivier said it—and he was right—, “the reader’s the one who sinks a book.” Who makes of it something more, in place of something less. I try to write books of less. Because, for me, to think by writing is an attempt to focus.

16. The private is employed so as to focus or shine a light into obscure regions, not so as to make them more numerous.

17. Regarding literature though, that obscure region—it’s no more than a drop of water compared to the Pacific Ocean of unadulterated obscurities that makes up my life. And, talking about my life—it, too, is terribly murky. I sense somehow that there’s something suspect in saying my life. I keep the word life under extremely high surveillance, as a doubtful concept. My sixth sense warns me that it’s a big word. One of those big words on which one constructs the kind of dam that bursts on the river K. What makes me say that my life seems suspect to me? The fact that my in my life means something different than my in, for example, my shoe. It’s got a different tone. If I write, I lost my shoe, the shoe’s the object I lost. If I write, I lost my life, I can’t simply think of my life as an object. Who’s ever bequeathed his life to anybody by will and testament?