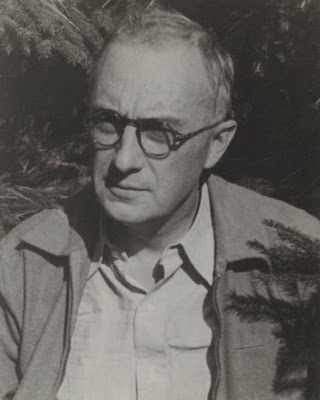 Tracked down the issue of Antaeus (Nos. 30 / 31, called “Poetry & Poetics”) in order to ascertain the provenance of the Williams “improvisations” therein collected, expecting some explanatory squib. Zilch. Only the title (“Eight Improvisations”) and imprecise date (“ca. 1924”). And (under “Poetics”) a stray letter to Frances Steloff, proprietress of the Gotham Book Mart, dated 15 March 1939. Williams is replying to a query regarding a definition of poetry he’d recently provided “at the Munson studio.” Williams protests: “I can’t remember my precise words” while insisting that such a thing’s “remained reasonably stable for a number of years.” And thus proposes:

Impassioned language takes on, by physical law, a rhythmic flow. The poet’s task, in any age, is to listen to the language of his time, when it is impassioned and wherever it occurs, and to discover in it, from it, the essentials of his form, his form, as of his own day. From these essentials he makes up his patterns—embodying the characteristics of what he finds alive in his day. This is the task of the major poet in any time.

The secondary task which a poet assumes is to jam the tide of his day into the forms of the past. This is what is usually understood by “poet.” It is safe, it is respectable, it is easy to understand and—it stinks.

Now. The term “objectivism” (useful only as a screw driver is useful to a carpenter or a mechanic and not for label purposes) helped some of us for a year or two to associate the subject and the form of a poem into a whole. The poem being made of words the form itself becomes a “word.” An 8th century form, that is, means in some measure the whole conceptual world of the 8th century which invented it and to which it is fitted . . .

Poetry should be the synthesis of its time in passionately communicable form. The braying jackasses say it isn’t possible to write poetry today, that its form is insignificant. But the jackasses have always brayed . . .

Too, I stumbled into Barry Ahearn’s piece—called “Editing the ‘Working Copy’ of The Wedge”—Appendix C of the Ahearn-edited Correspondence of William Carlos Williams and Louis Zukofsky (Wesleyan, 2003). Containing a short history of the fate of the “improvisations” in the manuscript of The Wedge. Apparently Williams originally (“in March 1943”) sent Zukofsky “a hefty 115-page typescript entitled, ‘The (lang) WEDGE’: a diffuse pot-pourri of 83 titles, including poems going back to 1905 (‘Acrostic for H.D.’)”—that out of Neil Baldwin’s report (“Zukofsky, Williams, and The Wedge: Toward a Dynamic Convergence”). Williams:

Just as soon as I am able I’ll send you the tome of my new book of poems by express—the damned book has assumed the proportions of a tome—and ask you to slash it unmercifully. Not that I intend to take your advice holus bolus, I don’t but I’d like you to indicate for me just how much could be cut from the script without hurting it, in fact I want you to help me get rid of the downright bad scribbles and the worst of the repetitious ones. Don’t hesitate, go to town, cut the whole damned book out if you feel like it.

And (27 March 1943): “I am sending the conglomorate of scripts of which I have spoken to you. It is obviously not a book. I don’t want to burden you nor am I asking you to make a book of it for me. . . . Naturally, if you want to tell me how the book should be constructed (now only slung together assways) that’s up to you. I’ll probably follow my own advices in the end anyway so don’t waste your time.” Odd diffidence and plea. Zukofsky, suggesting it be called The Language, cut it to 86 pages, 69 titles arranged in four sections. (Of the bilingually punning title, complete with Williams’s title page epigraph—

The (lang) WEDGE
With the tip of my tongue
I wedge you open
My tongue!
the wedge of my tongue
between those lips parted
to inflame you . . .

—Zukofsky wrote “The first three lines are enough,” and bracketed out the remaining three in pencil. The whole “lick” is eventually abandoned by Williams.) Later (letter of 11 May 1943 to Zukofsky), Williams reluctantly makes “a final determination to cut out the prose bits entirely” (calling it “the sort of thing I wanted to avoid but . . . couldn’t escape. If it doesn’t involve heart searching and hard work nothing evolves satisfactorily”) thus reducing (Baldwin reports, without naming the specific prose pieces) the total by seven. Still later Williams cut seventeen additional poems, and added five, making for a total of fifty. Ahearn:

The “working copy” of The Wedge” shows that Williams tended to jettison poems even when Zukofsky merely expressed doubt about their form. The manuscript Zukofsky examined contained numerous lengthy prose poems (Williams called them “improvisations”). Zukofsky did not suggest taking them out, but he did find their form as prose problematic. Of one of these, “Thatpoemjayjay,” Zukofsky observed, “OK, but I wonder whether it wouldn’t fit it in better, in a volume of poems, written out as lines rather than one prose stream. It’s solid enough, & doesn’t really need to call attention to JayJay’s (James Joyces’) device.” He offered much the same advice for another prose poem, “Wellroundedthighs”: “This means less to me than Thatpoemjayjay—but in any case, this too might gain in clearness written out as a poem in the line lengths indicating the sense.” Zukofsky sounded the same note with the prose poem “THEESSENTIALROAR”: “OK, I’d break this up into line lengths, too.” Even when Zukofsky sounded a bit encouraging, as he did when commenting on the prose poem “The Runner” (“This can be chiseled down & written out as verse”), Williams evidently saw little point in recasting the prose poems as poetry. Perhaps he was discouraged by Zukofsky’s comment about still another prose poem, “THICKCAKE”: “Writing this out in verse lines would make it clear and show you where it ought to be cut, if —.”

I find no Williams piece, prose or poetry, called “The Runner” anywhere. Is there a need to sleuth through Williams’s papers in an act of homage and retrieval? Here’s another of the “improvisations” (out of transition No. 13, 1928):

The most striking anachronism in N. Y. is of course the Metropolitan Museum of art with a slab by clever Paul to able John at the right of the entrance, badly worded, where Stonebridge of Hartford put a weight in the balance when he was sick of the ton of stuff he had lifted and the worst is that it spills over on the tall buildings but it doesn’t do it enough, like the rotten Stock Exchange like a dirty face without Pallas Athenas in it and the Telephone building and that crappy stuff—but the bronze tablets by Manny aren’t so bad but nobody ever sees them thank goodness it would clip one ball if they did and that’s what I mean, there isn’t a more potent anachronism in the city than the museum—it is right because it’s deadly, the detail of the ornaments and plates and vases even one or two pictures, the Burmese jewelry, they’re the essence of the quietness, it’s that that forks the noise out of its hole but if it weren’t for the roar there wouldn’t be any museum because the price of exchange depends not so much on the spiritual values but on the fat which has jus this to do with art that it collects everything that is cast off by the dead and puts it on like the peschecani, you know, Thenewrich, the fellow who just has written a novel, without knowing that Leonardo invented the toilet-seat—you see the poet’s daughter all nice and ripe, as Ken says, is noisy around the knees, that’s what gives her the pull, Kiki in spite of her noise is made of quietness but the roar is full of pulp into which nerves and sinews grow a this and that anti-roar, is, valuable as it is to something or other like the history of Ireland or Ulysses, a compendium, very dangerous to growth. It is quite stark in its gentleness, it wants to—needs to have a kind of starvation on which to thrive and so make the kind of flabby shank devotees and condoms that John enjoyed when he was tired—it is a monument to John’s fatigue when he felt a lead loose in his pencil, as Pop used to say, so it’s dangerous and that’s why we have prohibition, we don’t need alcohol, WE DON’T NEED ALCOHOL, we have all the noise we want but even poverty can make noise enough to be heard in those places I’d like to see anyone he heard because he was poor here—here we are NOT ALONE, we’re enclosed TOGETHER.
We don’t know there is nothing because the essential noise won’t let us hear it whispered so we don’t need to play chess but there where the oil is burnt out the emptiness is being felt by the muscle—so we grow and they atrophy: they tried to make a noise with the war but it was a very silly deception, all we had to do was to know they couldn’t make a noise and there it was.

Oddly “recalling” the intrepid dash and incautious speed of O’Hara, and O’Hara’s nonchalance with the monikers. (Williams’s “clever Paul” and “able John” likely referring to sculptor Paul Manship and John Pierpont Morgan. “Ken” to Kenneth Burke, “Kiki” to Kiki of Montparnasse, Man Ray’s mistress.) Odd to ascertain (impossibly) echo of O’Hara’s “My quietness has a man in it” in Williams’s “her noise is made of quietness,” or of O’Hara’s “we don't like terrible diseases” in Williams’s “we don’t need alcohol,” or even of O’Hara’s “Twin spheres full of fur and noise” in Williams’s “the roar is full of pulp into which nerves and sinews grow a this and that . . .” Or vice-versa, O’Hara echoing Williams (equally impossible).