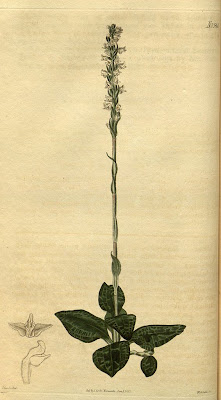 DESCR. Radical leaves five-nerved; ovate, acute, dark green tessellated with white bars: petioles sheathing the scape and one another. Scape erect, not at all twisted, pubescent, not six inches in length, clothed with alternate, linear bractes, or cauline leaves, somewhat twisted round the scape, the lowermost one broadest and tessellated like the radical leaves. Flowers white, scentless ? in a long straight spike, not secund. Bractes lanceolate, concave, one to each flower, equaling the german, which is pubescent, obsoletely three-cornered, with a projecting dorsal rib, a little incurved. The two superior internal petals connive so as to form a galea; the two lateral petals are patent, and equal to the labellum, which is concave above, and acuminate. Pollen masses 2-lobed: lobes nearly globular.

Thoreau to James Elliot Cabot (8 March 1848): “My book, fortunately, did not find a publisher ready to undertake it, and you can imagine the effect of delay on an author’s estimate of his own work. However, I like it well enough to mend it, and shall look at it again directly when I have dispatched some other things. . . . I esteem it a rare happiness to be able to write anything, but there (if I ever get there) my concern for it is apt to end. Time & Co. are, after all, the only quite honest and trustworthy publishers that we know. I can sympathize, perhaps, with the barberry bush, whose business it is solely to ripen its fruit (though that may not be to sweeten it) and to protect it with thorns, so that it holds all winter, even, unless some hungry crows come to pluck it.” “My book” refers to A Week on the Concord and Merrimack Rivers (1849), then making its futile rounds with various publishers and obliging, apparently, Thoreau’s repeated rewrites (Thoreau ended up, at Emerson’s counsel, paying himself for the printing of a thousand copies. Less than three hundred sold.) James Elliot Cabot assisted Louis Agassiz, for whom Thoreau periodically collected specimens. Sent with queries and field-notes: “Snapping turtles are perhaps as frequently met with in our muddy river as anything, but they are not always to be had when wanted . . . As no one makes a business of seeking them, and they are valued for soups, science may be forestalled by appetite in this market . . .” And:

Suckers. The horned, which I sent first, and the black. I am not sure whether the Common or Boston sucker is found here. Are the three which I sent last, which were speared in the river, identical with the three black suckers, taken by hand in the brook, which I sent before? I have never examined them minutely.
. . .
Lampreys. Very scarce since the dams at Lowell and Billerica were built.
Shiners. Leuciscus chrysoleucas, silver and golden.
What is the difference?

Details of use. Engagement with the ferocious and unstinting welter of the natural world, what lies beyond mad human striving. Larger sense of “Time & Co.” (effect of the Lowell and Bellerica dams on the lamprey population in the Concord). Cabot reports (c. 1 June 1847) that Agassiz’d found “one, and he thinks two, more new species” among Thoreau’s specimens: “one is a Pomotis,—the bream without the red spot in the operculum, and with a red belly and fins. The other is the shallower and lighter colored shiner.” I keep thinking of a line of Kenneth Burke’s—out of Counter-Statement (1931)—concerning the split between the rhetorical approach that “makes of literature the verbalization of experience, the conversion of diction into life” versus its opposite, that “would make of literature the verbalization of experience, the conversion of life into diction.” (Burke’s exemplar is Flaubert, whom he sees as “an admirer of Shakespeare, of Chateaubriand . . . attempting to write in the aesthetic of a Stendhal, . . . a novelist [who] despised the protrusion of art, [whose] greatest ambition was to write sentences which could make the reader forget them as sentences . . .”) Isn’t there something of that in Thoreau’s brave vacillatory medium? He writes: “As if Nature could support but one order of understandings, could not sustain birds as well as quadrupeds, flying as well as creeping things . . .” and proceeds (Walden, “Conclusion”) to succor pure outré verbalization in all its undeniable outbursting:

I fear chiefly lest my expression may not be extra-vagant enough, may not wander far enough beyond the narrow limits of my daily experience, so as to be adequate to the truth of which I have been convinced. Extra vagance! it depends on how you are yarded. The migrating buffalo, which seeks new pastures in another latitude, is not extravagant like the cow which kicks over the pail, leaps the cow-yard fence, and runs after her calf, in milking time. I desire to speak somewhere without bounds; like a man in a waking moment, to men in their waking moments; for I am convinced that I cannot exaggerate enough even to lay the foundation of a true expression. Who that has heard a strain of music feared then lest he should speak extravagantly any more forever? . . . The volatile truth of our words should continually betray the inadequacy of the residual statement. Their truth is instantly translated; its literal monument alone remains. The words which express our faith and piety are not definite; yet they are significant and fragrant like frankincense to superior natures.

Something of the bon mot electricity there, something of the enigma-split of some of the sayings pulled out of the Journal—“When a dog runs at you, whistle for him.” Or: “He who resists not at all will never surrender.” The unspared indefinite body of the word itself: that “literal monument” left behind, shrugged off exoskeletal shriving cloth. Snake skin. Compare it with Thoreau’s worries in the Journal-entry for 19 August 1851:

Chicadees & jays never fail—The cricket’s is a note which does not attract you to itself. It is not easy to find one
I fear that the character of my knowledge is from year to year becoming more distinct & scientific–That in exchange for views as wide as heaven’s cope I am being narrowed down to the field of the microscope—I see details not wholes nor the shadow of the whole. I count some parts, & say ‘I know.’ The cricket’s chirp now fills the air in dry fields near pine wood.

And thence is moved to consider the aptness of the “richly veined leaves of the Neottia pubescens or veined Neottia Rattle-snake plantain”: “I like this last name very well though it might not be easy to convince a quibbler or proser of its fitness. We want some name to express the mystic wildness of its rich leaves. Such work as men imitate in their embroidery—unaccountably agreeable to the eye—as if it answered its end only when it met the eye of man.” (The worry and upshot of the rude mechanickal’s continuous reading, unadroit, with few hints and faint feelers to the beyond: “I see details not wholes.”)
Posted by John Latta at 7:16 AM