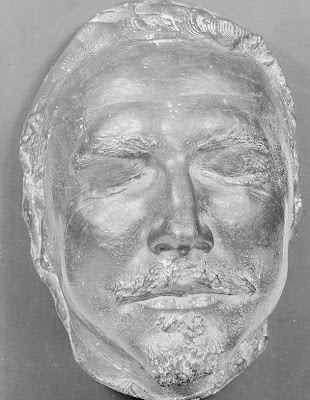 Life Mask of Ezra Pound by Nancy Cox McCormack, c. 1922
(Remnant of a Poundian hoax. “Calling it a death mask, he had photographs of it sent on Good Friday to
The Little Review.” Editors Margaret Anderson and Jane Heap were not fooled. Pound to Williams (21 May 1922): “If you hear a report of my death don’t fer Xt’s sake deny it. Say you expected as much. Suggest Xifiction or assifiction or any other— / & express perlite regret.”)

Rain sloshing down. Marianne Moore, out of the “Foreword” to Predilections (1955):

Silence is more eloquent than speech—a truism; but sometimes something that someone has written excites one’s admiration and one is tempted to write about it; if it is in a language other than one’s own, perhaps to translate it—or try to; one feels that what holds one’s attention might hold the attention of others. That is to say, there is a language of sensibility of which words can be the portrait—a magnetism, an ardor, a refusal to be false . . .

When I say criticism, I mean of course in this place the commentation and exposition of works of art by means of written words . . . No exponent of criticism (in this limited sense) has, I presume, ever made the preposterous assumption that criticism is an autotelic activity. I do not deny that art may be affirmed to serve ends beyond itself; but art is not required to be aware of these ends, and indeed performs its function, whatever that may be, according to various theories of value, much better by indifference to them. Criticism, on the other hand, must always profess an end in view, which, roughly speaking, appears to be the elucidation of works of art and the correction of taste.

Ezra Pound, out of “Prefatio Aut Cimicum Tumulus” (literally, “Preface, or Heap of Lice”), in the Pound-edited Active Anthology (1933):

Mr Eliot’s flattering obeisance to ‘exponents of criticism’, wherein he says that he supposes they have not assumed that criticism is an ‘autotelic activity’, seems to me so much apple-sauce. In so far as the bureaucracy of letters has considered their writing as anything more than a short cut to the feeding trough or a means of puffing up their personal importances, they have done little else for the past thirty years than boost the production of writing about writing, not only as autotelic, but as something which ought to receive more attention from the reading victim than the great books themselves.
Granted that nobody ought to be such a presumptuous imbecile as to hold up the autotelic false horizon, Mr Eliot describes a terrestrial paradise and not the de facto world, in which more immediate locus we observe a perpetual exchange of civilities between pulex, cimex, vermiformis [flea, bedbug, maggot], etc., each holding up his candle before the shrines of his similars.
A process having no conceivable final limit and illustratable by my present activity: I mean on this very page, engaging your attention while I talk about Mr Eliot’s essay about other essayists’ essays . . .

Out of John Cage’s A Year from Monday: New Lectures and Writings (1967):

When I got a letter from Jack Arends asking me to lecture at the Teachers College, I wrote back and said I’d be glad to, that all he had to do was let me know the date. He did. I then said to David Tudor, “The lecture is so soon that I don’t think I’ll be able to get all ninety stories written, in which case, now and then, I’ll just keep my trap shut.” He said, “That’ll be a relief.”