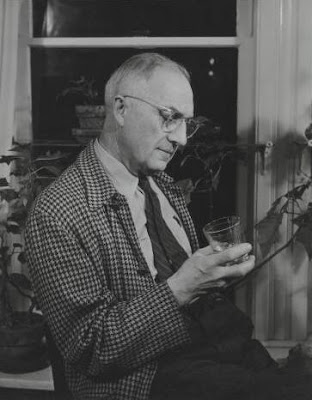 A minor flurry of sleuthing for mislaid William Carlos Williams pieces yesterday—mostly what WCW bibliographer Emily Mitchell Wallace labels “improvisations”—prose outbursts uncollected in the two-volume Collected Poems. Turns out Antaeus printed eight of the pieces in 1978, including two (“Pubic” and “Thickcake”) unlisted by Wallace. One of the eight:

It is the pad that protects the adolescence, insulating it against the injury of knowledge and so permitting the strength for knowledge to grow, rather than the quite bare wire on which the colored swallows sat, the very small egg buried in the thick roaring womb that rides the elephant and turns three somersaults as if Jockey Joe Sloan did an snappy jig act between what’s his name, the fellow that took Nijinsky’s place, did that elbow trick SALADE and the scraped off evening in the Bois piece. Poor Nijinsky with a wife and Diagileff, one driving him to rehearsals and the other dragging him home and both in love and noendtoit with the drill drill drill. He tried to manage himself but the English ass didn’t get him his boots on time so he had to go insane diametrically opposite as it the Edinborough Review should say something uncertain it’s the thunder that holds the lightning as much as to say: when the machine scrapes and screams carrying the advertisements of ladies hose around the curve, there is a machine implied that accidentally carries the train and its occupants along. Without the roar to insulate the petty pimple of their comprehension there would not be a ground in which the MASS could accumulate, THUS conversely the Essentiality of the blatant and perfectly stupid excrescence like the New York Journal is mechanically sound and morally effective—and the whole mass is knit, generating the game of football—with its organized cheers. Baseball is something else the ball being harder, smaller, different in color and you hit it with a stick, that is although Babe Ruth may shine for a season there will always be a strong party opposed to him as a factor detrimental to the spirit of the game which is silent, saturnine, close to the principles of physics and lyric poetry.

Two uncollected pieces. Both out of the The Little Review. In 1918:

Anger spitting through a mush of lumpy stuff—mouldy words, lie-clots—transforms it into that which lets a world beyond come through, before that, blocked out. But that is only the beginning. By anger I mean outraged justice of position wrathfully demanding its wavering complement—on the brink of a new alignment: righteous wrath.
This implies one in the right: counter: one manifestly and frankly in the wrong: bold lies. This implies a dissolving union. This means a further dissolution ending in complete separation, involving a rebeginning or it means a reunion between the severing parts.
The nature of this reunion is the end toward which I attack. It is, as I take it, something as virginal, as completely pristine as any fresh choice, any new alignment can be. More new! The only new!
For to break and begin a new alignment is recapitulation but to recement an old and dissolving union is without precedent, a totally new thing. The old union in this case is a part of the new and being directly a part needs no counterpart, the recemented union being ready at birth to go forward. Every part of a changed alignment is a counterpart of the dead old.
This is hard but important.
A dawdling complement struck full-face is split—a shell of words scaled off. The face comes from behind its mask. The mask is smooth coin:—slimed their water, fish dung, a stinking, soupy liquid, endearing terms, bare hands on —, in bed at night, the children, dirt under the piano, systematic, get up earlier, the dishes, smell of cooking, sweetheart, darling, dearest, pimples on your back, your breath smells, your thighs are not —, you are cold, I am tired tonight, I feel lively tonight, your kind of man, what a fool I was, our whole married life, I thought I was marrying a —, Undank ist der Weltlohn, coward, self, the selfish get the best in this world (of course) I am not young now— Flash!
Anger will recreate a world. The white bayonette of anger is: I demand. But lies and deeper lies are the spawn of action. Filth breeds. The white flash of justice is eggs split by an edged flame. Justice lives on lies: a buck-pike that eats its own spawn.
The birth is in a nest of dead words slimed over: soft down to the mother’s breast.
Action brings good. Action upon an old act brings a splitting from the end backward to the beginning so that the cleanliness resultant is a thing opposite to nature, an inversion of whiteness— Back to the beginning.
“I thought I had married a God” to, “I demand a God” is a stroke from the end back to the beginning—but a new beginning, yet resting with its feet on the neck of the old, crushing the old under its feet—unearthly—this is the actual heaven—temples fanned by a wind moving in the wind.
But ac-shun! ac-shun! ac-shun! ac-shun! It is a steam-engine getting under way: the result is a lily opening upon a crowbar stem. Out of it the cleanliness of spring air! It is the roots of roots we desire! the flower of a flower! the man of a man! the white of white— From the beginning, again! Fourth dimension—well? It is my old life. I hold it off. I have rebegun. Nothing of the old remains or will remain—after. Halleluiah!
I hate you! Flame will be tied to the heels of love in no other way.
The hard backbite of anger recurring in the ebb flow is sturdiness holding its own.

Williams’s homely (ungainly, homegrown) anger. In an essay called “Belly Music” (“I insist that it is I, I, I who PUTS the music into the throats of those in whom I HEAR my music. I’ll sing when the veins below my belly are clotted solid”)—in the final issue of the Williams-edited Others (1919), Williams faults what he calls “the futility of this American habit of hanging upon the lips of loveliness.” And writes:

Perhaps I am a sullen suburbanite, cowardly and alone. Perhaps it is true that I have not seen the cocottes of Montmartre or the Lady Diana. Perhaps it is a preposterous longing for the wealth of the world. I sit a blinded fool, with withered hands stretched out into the nothingness around me. Perhaps this is a sickness. Perhaps what I call my singing is a stench born out of these sores. I deny that that makes any difference. AT LEAST I AM THAT. Or if the answer is that no one will listen to my singing or even call it singing I say that they cannot help listening and that—it doesn’t matter one way or the other.

How bracing the ferocious defiance of the unjustly neglected . . .

The other uncollected “improvisation” is printed, too, in The Little Review (XII. 1, 1926). A piece of ventriloquism. The prose block preceding it (called “Poem” and beginning “Daniel Boone, the father of Kentucky”) is included in the Collected Poems. Something dubious and indistinct in the choice, or measure. Alors:

Dear Aunt N.:—
Wow! “a good for nothing—drink and bad women—no honor—go west” Some charges, must say something, West Carruth sinking, I stay below as engineer, the others lacking courage. West Nohno 4 long trips to West Africa with a sick and physically dead chief engineer. I break my leg—he dies—all hands drunk and criminally neglectful—I take charge with a useless leg and body filled with fever and bring her home with credit. Now holding ship for me, also offered post engineer and dock master’s job at Nigeria—unable however to take either account this broken leg.
Drink is something that does not bother me—a drink or two and finish—that is my absolute rule—there have only been some three times during my life time when I have gone under. One at Doc. B’s after coming back from a big party and celebration in Newark, poison home made stuff and then at B’s a glass of absinth on top. I’ve felt more sorry than I can say for that. Once in France when because I would never carouse with the gang they doped a bacardi on me, then left me to stagger on by myself. But though it took near all night I got safely back to my ship alone. The other time I can’t remember except in a foggy uncertain way, I’m certain however that there was another. That is the extent of drink. I’ve got a bottle of Johnny Walker, black label, right here in my room—for me it will last six months or a year. I like however to bring it back to my friends—think perhaps they might appreciate it.
Now for women—yes—I don’t hate them too much—but not just any woman and never a bad one. Comparing myself with a lot of men I know I would certainly draw down the grand halo for purity etc. etc. etc. No joke.
Now what’s next? Go west. Well we’ll see. I had hopes of taking a run out there this time being as I simply can’t do any work anyhow. As to staying out there—I can’t see it—that is to staying in Chicago. As to running vessels on the Mississippi—well—
Now please write some more and let’s get at the base trouble of your wonderful attitude. One thing is sure, I never loaf—with health and able body I couldn’t—not only on my own part—but the shipping men who know me wouldn’t let me alone. I’m wanted. How now for your good for noting—drunkard—women master and man of no honor. Pray that I may get a good leg that I may go some more.
Love and kindest wishes B.O.S.

Speech and its abrupt rhythmic locales: “poison home made stuff and then at B’s a glass of absinth on top.” In Williams’s “A Tentative Statement” (The Little Review, 1929)—lashings out at the “academy” coupled with an insistence on “place” as being that which “creates the new, by necessity, and frees it from thralldom to ‘beauty’ which is a kind of death and an origin of philosophic despair”:

The difficulty with the secular “academy” is that while it tends to increase erudition, it detaches it from place. Therefore, instinctively, artists with sense fly from it, to their cost, but by necessity to save themselves. It fails to connect knowledge with a source. . . .
Paraphrasing the young Jefferson: All literatures are created free and equal—each in its place. The later differences are modifications of the original character by erudition which increases the surface, involuting it, twisting, fanning it out, caving it in but never changing the unique plasm, never superceding the original character and vigor or the lack of it.
It is true, I believe, that no great literature has come from an insignificant place but has been stamped always with the local power that has generated it.

Recall that Williams’s 1921 piece for Contact (No. 2) called “Comment” (in Selected Essays) originally ended with two quotes. One by John Dewey—“We are discovering that the locality is the only universal.” One by Maurice de Vlaminck—“Intelligence is international, stupidity is national, art is local.”