Snow in April. Knifing down, slicing into the yellow daffodils, into the hyacinths. A long weekend of spotty accruals, reading pages here and there, deferring the rare engines of making. (Ben Jonson says: “There be some men are born only to suck out the poison of books: Habent venenum pro victu; imô, pro deliciis [They hold poison to be a victual; indeed, a delicacy]. And such are they that only relish the obscene and foul things in poets, which makes the profession taxed.”) Tax’d, yea, tax’d. Callimachus says Apollo recommends the poet “follow trails unrutted by wagons” and “keep to the back roads though the going is narrow”:

“We are the poets for those who love
the cricket’s high chirping, not the noise of the jackass.”

Out of a fragment of the prologue to the Aetia (meaning “cause” or “origin”), “an elegiac poem in four books . . . made up of a series of loosely connected explanations of legends,” &c. Translated by Stanley Lombardo. One lovely fragment reads:

[. . .]
when the Muses settled like a swarm of bees
near Hesiod, out on the hill with his sheep,
by the fiery horse’s hoofprint
generation out of Chaos

water from the hoof

“hurt another and hurt yourself most”

to live worthily
all things you accomplish

I think of Barbara Guest’s line (in “Composition”): “Writing, narrow and sparse, pungent as the lemon tree.” Or Gustaf Sobin (in “A Portrait of the Self as Instrument of Its Syllables”) nodding to:

what brought me then,
over the low
ledges.     brought that I
bring: impelled that I urge, herd, drive the
words into
that

luminous salvage.     and stand, there, in those
linked shadows, thus
lit.

“Luminous salvage.” Later: “luminous debris.” Vestigial discourse: canny assemblages of previous marks, the footprints of mania’d runners going to and fro, vestigia. Think of the fine fretting (two senses) of accomplishment. Accomplishment against the nod and against the nod out. An urge against the “herd” (see “jackass, the noise of the”). What is lovely is how Williams (in a 3 March 1950 letter to Creeley, print’d in Origin) calls poetry one of “the unobstructed arts” (“a means is at least present . . . where a man can go on living”). Here’s the whole (Williams doing a spotty Pound burlesque):

My own (moral) program can be chiefly stated. I send it for what it may be worth to you: To write badly is an offence to the state since the government can never be more than the government of the words.
If the language is distorted crime flourishes. It is well that in the unobstructed arts (because they can at favorable times escape the perversions that flourish elsewhere) a means is at least presented to the mind where a man can go on living.
For there is in each age a specific criterion which is the objective for the artist in that age. Not to attack that objective is morally reprehensible—as evil as it is awkward to excuse.
Bad art is then that which does not serve in the continual service of cleansing the language upon all fixations upon dead, stinking dead, usages of the past. Sanitation and hygiene or sanitation that we may have hygienic writing.

The kind of thing an ideologue (and there be plenty afoot in any “era”) might intercept and run with. Veering “off” track provides one with one means of continuance, skittish, untrellis’d, prestidigitatory, fleet. Against the noisy ycleptick of the present. Jonson: “The multitude commend writers as they do fencers or wrestlers, who if they come in robustiously and put for it with a deal of violence are received for the braver fellows; when many times their own rudeness is a cause of their disgrace, and a slight touch of their adversary gives all that boisterous force the foil. But in these things the unskilful are naturally deceived, and judging wholly by the bulk, think rude things greater than polished, and scattered more numerous than composed . . .” 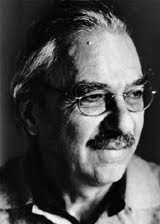