A Field of Action Painting

Fatigue or addle-patedness, some kind of deleteriousness’s clean’d out the cranny: I am bum-foozled (literally: ass-drag’d) by a morning’s jaunt in search of any “subsequence” to an untitled Spicer poem found in the Spicer / Duncan An Ode and Arcadia (Ark Press, 1974)—

I
Come watch the love-balloon, that great
Inflated tautology of angel-wings.
(They say it floats somewhere but I have seen
Its stupid flutter like the great-sea birds
Who stumble through the city in a storm.)
Its cord goes downwards, watch the dangling men
Upon its draw-strings, watch a sudden wind
Give them a shaking; tangle, change, and bind.
Each wind is fatal. Nothing knows its place.
Beneath that high-flown floater love is like a race
Between the horse and crouching rider; no one wins,
And neither stops till someone wins—or falls.

II
Come watch the love-balloon, that great
Inflated tautology of angel-wings.
(They say it floats somewhere but I have seen
Its stupid flutter like the great-sea birds
Who stumble through the city in a storm.)
Its cord goes downwards, watch the dangling men
Upon its draw-strings, watch a sudden wind
Give them a shaking; tangle, change, and bind.
Each wind is fatal. Nothing knows its place.
Beneath that high-flown floater love is like a race
Between the horse and crouching rider; no one wins,
And neither stops till someone wins—or falls.

Jack Spicer meets Saul Bellow. How oddly refreshing, that demand that one read it twice. (I think of a recording of Williams reading at Harvard in 1951, affably insisting he read “This Is Just to Say” twice: “Modern American poetry is . . . like a man without a head. We got the whole body of English literature right there, all that it need is a head, that’s all.”) In Duncan’s The H.D. Book, mention of Williams’s 1948 lecture at the University of Washington, “The Poem as a Field of Action”: “anticipating Charles Olson’s ‘Projective Verse’ with its proposition of composition by field.” (Variously, by Olson in 1950, saying a poet, “the moment he ventures into FIELD COMPOSITION—puts himself in the open—he can go by no track other than the one the poem under hand declares, for itself. Thus he has to behave, and be, instant by instant, aware of some several forces just now beginning to be examined . . .”) The “field”—Duncan spalling off Olson’s thinking in “the opening of”—okay. Whence “action”? What is the sequence whereby Harold Rosenberg’s naming of “action painting” comes about (in “The American Action Painters” in 1952)? Did Rosenberg read / know of Williams? Did Olson? (Though it seems “The Poem as a Field of Action” is finally print’d only in the 1954 Selected Essays.) Williams’s talk is contrarian, ranging, profuse: he complains both of American poems being “not subtly enough made” and that “the structure, the staid manner of the poem cannot let our feelings through”). The feelings: big, unfinish’d, conglomatory, a welter:

We seek profusion, the Mass—heterogeneous—ill-assorted—quiet breathless—grasping at all kinds of things—as if—like Audubon shooting some little bird, really only to look at it the better.
If any one man’s work lacks the distinction to be expected from the finished artist, we might well think of the profusion of a Rabelais—as against a limited output. It is as though for the moment we should be profuse, we Americans; we need to build up a mass, a conglomerate maybe, containing few gems but bits of them—Brazilian brilliants—that shine of themselves, uncut as they are.

It’s the unrefined, the unfound (two senses) Williams sees confounding the narrow, unfixing the prosodic “laws.” He writes how “we as loose, disassociated (linguistically), yawping speakers of a new language . . . [disturb] the metrical table of values” and compares it to the way “unknown elements . . . disturb Mendelyeev’s table of the periodicity of atomic weights and so lead to discoveries.” (How Dr. Williams’d jump to the existence of the “super-heavy” element Rutherfordium (detect’d in 1966), “not found in nature” and of no use.) Rosenberg’s “The American Action Painters”: Is there a tenable relation between a remark like: “At a certain moment the canvas began to appear to one American painter after another as an arena in which to act—rather than as a space in which to reproduce, re-design, analyze or ‘express’ an object, actual or imagined. What was to go on the canvas was not a picture but an event” and Williams’s point that one can “put it down as a general rule that when a poet . . . begins to devote himself to the subject matter of his poems, genre, he has come to an end of his poetic means”? Williams says, too, that “a new way of writing” ’s most apt to be found where there’s “instability in the language where innovation would be at home.” Instability: Rosenberg’s “ there is no point to an act if you already know what it contains.” Or:

A sketch can have the function of a skirmish.

The apples weren’t brushed off the table in order to make room for perfect relations of space and color. They had to go so that nothing would get in the way of the act of painting. In this gesturing with materials the aesthetic, too, has been subordinated. Form, color, composition, drawing, are auxiliaries, any one of which—or practically all, as has been attempted logically, with unpainted canvases—can be dispensed with. What matters always is the revelation contained in the act. It is to be taken for granted that in the final effect, the image, whatever be or be not in it, will be a tension.

“Tension” is akin to Williams’s “structure” (gesture akin to speech). Williams’s canvas / field is act’d on by “the mouths of the living”—“the dialect is the mobile phase, the changing phase, the productive phase . . . It is there, in the mouths of the living, that the language is changing and giving new means for expanded possibilities in literary expression and, I add, basic structure—the most important of all.”

Rosenberg makes no notice of Williams in the essay, though he sutures in an odd line of Stevens: “The American will is easily satisfied in its efforts to realize itself in knowing itself.” (Just under the terrific Apollinaire line, story of the American artist / poet: “J’ai fait des gestes blancs parmi les solitudes.”) The Stevens quote seems to signal distrust. Rosenberg’s concern is “seriousness”—a way, one supposes, of making experience “authentic”:

The test of any of the new paintings is its seriousness—and the test of its seriousness is the degree to which the act on the canvas is an extension of the artist’s total effort to make over his experience.
A good painting in this mode leaves no doubt concerning its reality as an action and its relation to a transforming process in the artist. The canvas has “talked back” to the artist not to quiet him with Sibylline murmurs nor to stun him with Dionysian outcries but to provoke him into a dramatic dialogue. Each stroke had to be a decision and was answered by a new question. By its very nature, action painting is painting in the medium of difficulties.

Here the moral jones of American art outs. Difficulty makes genuine (an attitude rather lacking in Dr. Williams). A footnote Rosenberg here append’d to the essay in The Tradition of the New (1959) reads in part: “In a word, Action Painting is the abstraction of the moral element in art; its mark is moral tension in detachment from moral or esthetic uncertainties; and it judges itself morally in declaring that picture to be worthless which is not the incorporation of a genuine struggle . . .” Contra:

Weak mysticism, the “Christian Science” side of the new movement, tends in the opposite direction, toward easy painting—never so many unearned masterpieces! Works of this sort lack the dialectical tension of a genuine act, associated with risk and will. When a tube of paint is squeezed by the Absolute, the result can only be a Success. The painter need keep himself on hand solely to collect the benefits of an endless series of strokes of luck. His gesture completes itself without arousing either an opposing movement within itself nor the desire in the artist to make the act more fully his own. Satisfied with wonders that remain safely inside the canvas, the artist accepts the permanence of the commonplace and decorates it with his own daily annihilation. The result is an apocalyptic wallpaper.

Which—my own jonesing for a stance beyond the flip complacency of the current careering hordes—sounds a little like Flarf & Cie’s watery slumgullion to me. 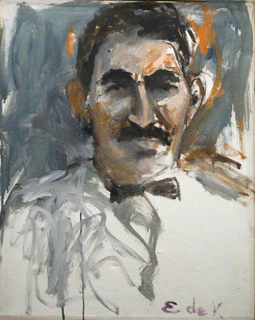