One week “off” a few years “back”—spent up north in some kind of swim-sustain’d dalliance, beery and unclutter’d—I truck’d along a copy of Emmanuel Hocquard’s Conditions de lumière (P.O.L., 2007), thinking I’d try my hand at turning its tiny memos into some kind of American speech. And diligently rough’d out about a half of it, penciling it down into a pint-sized stenographer’s pad. A way of both “exercising” my quasi-execrable French, and of reading Hocquard. Minor hint of “doing something” with my versions: I did put a couple “up” here and here and here, f.w.i.w.-ing it like a syntagmatick. (Or a skank.) And shortly learn’d of an effort underway by Jean-Jacques Poucel and Cole Swensen’s La Presse to “do” the whole book. Out now: Conditions of Light (La Presse / Fence Books, 2010). A sleeker, more expert thing, I’d warrant. Hocquard’s book consists of twenty-one number’d parts, each containing five tiny “memos” (my word—snapshots, ideogrammes)—identically-shaped phrase-arrangements. Here’s one (Poucel):

The twenty-one parts (I-XXI): each is call’d “Conditions of Light.” Each “memo” anchors a single page: lots of white space. A final piece (with “Notes”) is call’d “Dans une coupe en verre” (Poucel, dodging “coupe”—with its punnery of cup, of cutting—translates it as “In Glass”). I read it as a kind of statement of poetics:

Echoes of the put together “abbreviated pictures” / “luminous details” of Poundian imagism / Sillimanesque New Sentence-ry (“Propositions are independent   Between them relations take place”). Something of Duncan’s “law of the ‘the’”—how grammar itself serves to narrow the possibility of saying (“The only subject there is is grammatical”). Something of Spinoza’s “The more any image has reference to many things, the more frequent it is, the more often it flourishes, and the more it occupies the mind.” Or, of Zukovsky’s (out of A Test of Poetry):

The less poetry is concerned with the everyday existence and the rhythmic talents of a people, the less readable that poetry is likely to be. But the forms of particular communication—which are necessary enough for a varied life—may never, in any society, be absorbed as automatically as air.

Or Robert Hass’s “All the new thinking is about loss” line out of “Meditation at Lagunitas”: “word is elegy to what it signifies” (“Language in its entirety is elegy”). Or Italo Calvino’s line somewhere about “this world dense with writing that surrounds us on all sides.” Here’s the initial sequence of five pieces:

And in my version:

Out of Hocquard: “These flowers are in the middle of their making.” And: “The representation of the same is just right.” And “Meaning imposes its fiction.” I keep turning back to Conditions of Light. A late memo reads: 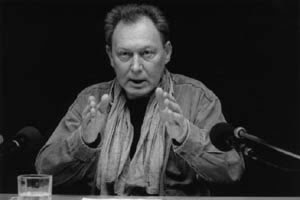