Reading, I jot down page numbers, tout seul, or accompany’d by one word notes. Returning to a page means retrieving a nexus of momentary particulars, some probable spur, or goad. Or not. Some moments coalesce to naught beyond a movement, some peremptory “en train de” took by the reading’s onslaught and continuance. One fails at the recovery, the fluidity of context siphon’d off. Here, retrievals sans cesse, denatured, of what limit’d use? Glints in the slurry that is The H. D. Book. A poetics is “the study of work to be done”:

That one image may recall another, finding depth in the resounding, is the secret of rhyme and measure. The time of a poem is felt as a recognition of return in vowel tone and in consonant formations, of pattern in the sequence of syllables, in stress and in pitch of a melody, of images and meanings. It resembles the time of a dream, for it is highly organized along lines of association and impulses of contrast towards the structure of the whole. The impulse of dream or poem is to provide a ground for some form beyond what we know, for feeling “greater than Reality.”

Duncan’s talk of “knots of meaning that refused any easy use”—gleanings of the Theosophic world and its “quest for meanings” become “a vital need in life that one recognized in romance where the hero must learn the language of birds, overhear the conversation of trees . . .” How it imbue’d a poetics, a sought thing. How I stand with Olson, the Olson of that Duncan-chiding in “Against Wisdom as Such”:

I fall back on a difference I am certain the poet at least has to be fierce about: that he is not free to be a part of, or to be any, sect; that there are no symbols for him, there are only his own composed forms, and each one solely the issue of the time of the moment of its creation, not any ultimate except what he in his heat and that instant in its solidity yield. That the poet cannot afford to traffick in any other “sign” than this one, his self, the man or woman he is. Otherwise God does rush in. And art is washed away, turned into that second force, religion.

Disturbingly, out of the hermetic roots, an accompanying sense of being one of the elect, the chosen. Duncan’s heroes (“company”), a bande à part:

We must move throughout the history of man to find many of our own kin, for here and now those who think and feel in the terms we seek are few indeed. But from each of these the cry goes up—to whom other than us, their spiritual kin—from an intense solitude. Not only Freud’s “There are very few who understand this,” but Stein’s “Do you know because I tell I you so, or do you know, do you know. (Silence) My long life, my long life,” or Joyce’s “Thinking always if I go all goes. A hundred cares, a tithe of troubles and is there one who understands me? One in a thousand of years of the nights?” or Pound’s plea from Canto CXVI:

I have brought the great ball of crystal,
who can lift it?
Can you enter the great acorn of light?

Or, there’s the sense of the lock’d box, “the wisdom of ‘what words conceal’”—Duncan even attempts to enlist Williams’s forthright “no ideas but in things” in the magisterial hoo-hah, suggesting that it, too, “must” find its resonance in “the dreams of the race.” Duncan:

The very heightened sense of the relatedness of everything set poets apart. The very secret of the impulse in poetry is the troubled awareness the poet has of meanings in the common language everywhere that those about him do not see or do not consider so important. “We,” H. D. writes in The Walls Do Not Fall, “bearers of the secret wisdom,” and then:

but if you do not even understand what words say

how can you expect to pass judgment
on what words conceal?

Though: the riotous and conceal’d “relatedness” is got at—recall’d or gain’d—by a musically-attenuated and severe seeing. I suspect Duncan’s right about the import of the eye (“Vision itself may be the spear; the eye being struck, the necessary vulnerable spot, where reality can get at the hero-poet”) in H. D.’s work, though the lingo of restraint in the telling seems oddly “counter”:

H. D.’s intensity of image arises in her stricture of the eye to see in the clear, to penetrate the elf-skin or shimmer of excited vision and to locate the object. She holds a limit in poetry against the riot of the imagination, for she seeks a conscious recognition of what is going on. The very tenseness of her line is an attention that functions to hold back from the potency poetry has to produce its own luxe of the unreal, the world seen thru a glass darkly, the shadow of the dome of pleasure, the strange thunders from the potency of song, and the magic casements that open upon fairy seas. This reverie or “escape” in ascent or descent beyond the scale of the consciously analyzed is the medium of what she calls music that she resists.

Tellingly: “she does not dream or day-dream but strives to render an exact account of what she has seen.” Whence, then, one wonders, the correspondences, the hid, the necessary undivulg’d occult? 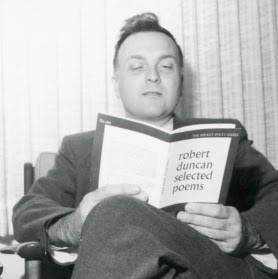