Art itself is a fix:
the crux of the matter
is that without its singling
exultant note, all things commingling
merge in constant flux unfocus’d,
a smear of forms preliminal,
unboundary’d, unlimn’d and skint by
the lassitudinous gods for whom
clarity is a kind of
decay, a fissile force breaching
the phenomenal mud. Up leaps
a proviso with a club
hewn of buckthorn, a story
torn up out of madness,
bacilli, eidola or the like.
A breeze is calling out
the name of a sun-
black’d cathartic some girls used
to chew in the dog
days in Thessaloniki, sweating out
a singularly limb-slacking stink,
presumptuous as a scholiast. Or
a cypress-tooth’d hill near
Patras, general in its refusal
of the dissolute, is loathe
to offend by scheduling anything
beyond its momentary persistence. A
scuffle must ensue. A sobering
radiant punch-up and grunt
dalliance with the helmet’d gods
who post-coitally slurp too
noisily at the ordinary soup.

Early in Ronald Johnson’s “Hurrah for Euphony”: “Thumb the roots of any word in a (large, preferably) Webster. No harm going further afield, or digging down, for there is new territory. Agassiz would have his students calculate every particle of soil clinging each root—and write exactly about it, and more exact again.” Nodding to Pound’s anecdote, certes, of Agassiz and the fish (“The proper METHOD for studying poetry and good letters is the method of contemporary biologists, that is careful first-hand examination of the matter, and continual COMPARISON of one ‘slide’ or specimen with another.”) That root-particularity, though—so akin to Olson’s “leave / the roots on . . . // And the dirt”—where’s it found in Agassiz? (Pound’s talk of “roots” in ABC of Reading veers out of a metaphor of radical inherency:

You receive the language as your race has left it, the words have meanings which have ‘grown into the race’s skin’; the Germans say ‘wie einem der Schnabel gewachsen ist’, as his beak grows. And the good writer chooses his words for their ‘meaning’, but that meaning is not a set, cut-off thing like the move of knight or pawn on a chess-board. It comes up with roots, with associations, with how and where the word is familiarly used, or where it has been used brilliantly or memorably.

The German wie einem der Schnabel gewachsen ist refers to talking “naturally,” unaffectedly, exactly what comes unpawk’d up into the mouth.) One’d suspect Johnson’d found Agassiz pedagogy detail’d in Guy Davenport’s The Intelligence of Louis Agassiz: A Specimen Book of Scientific Writings. Davenport apparently found Agassiz through what he calls “the almost secret publication by John Kasper and Ezra Pound, of an abominably printed but wholly admirable collection of paragraphs entitled Gists from Agassiz, or Passages on the Intelligence Working in Nature, (Square Dollar Series, Washington, 1953) . Davenport’s clarity of complaint regarding the highly policed “zones” of “literary” achievement is ever pertinent:

The place scientific writing might claim among the corpus of imaginative writing zoned off as literature by unstable rules for admission and rejection is a strong one, allowing for inevitable airs of condescension from the protectors of letters. The spirit of our age has been curiously denying, although its search for purity is understandable. The American in particular regards his mind as a showroom for certain furnitures as content, and this silly idea gets defended by the vulgar error that if the mind is stuffed, there’ll be no room for important things in their time. I first collided with this homely belief while teaching in St. Louis, that museum of Americana, and should have known that it came from Poor Richard or Sherlock Holmes. It is from Holmes. . . .

His ignorance was as remarkable as his knowledge. Of contemporary literature, philosophy and politics he appeared to know next to nothing. Upon my quoting Thomas Carlyle, he inquired in the naivest way who he might be and what he had done. My surprise reached a climax, however, when I found incidentally that he was ignorant of the Copernican Theory and of the composition of the Solar System. That any civilized human being in this nineteenth century should not be aware that the earth travelled round the sun appeared to be to me such an extraordinary fact that I could hardly realize it.
“You appear to be astonished,” he said, smiling at my expression of surprise. “Now that I do know it I shall do my best to forget it.”
“To forget it!”
“You see,” he explained, “I consider that a man’s brain originally is like a little empty attic, and you have to stock it with such furniture as you choose. A fool takes in all the lumber of every sort that he comes across, so that the knowledge which might be useful to him gets crowded out, or at best is jumbled up with a lot of other things so that he has a difficulty in laying his hands upon it. Now the skilful workman is very careful indeed as to what he takes into his brain-attic. He will have nothing but the tools which may help him in doing his work, but of these he has a large assortment, and all in the most perfect order. It is a mistake to think that that little room has elastic walls and can distend to any extent. Depend upon it there comes a time when for every addition of knowledge you forget something that you knew before. It is of the highest importance, therefore, not to have useless facts elbowing out the useful ones.”

No closer to Johnson’s source. There is, in Agassiz’s A Journey to Brazil (written with “Mrs. Louis Agassiz”—Elizabeth Cabot Cary—prompting Emerson, according to Davenport, into saying that the book was “like a mermaid, so harmonious was the combination of ichthyology and travelogue.” Davenport: “This promptly became a Boston riddle: “Why is the Agassiz Brazilian book like a mermaid”? “Because you can’t tell where the lady begins and the fish leaves off”) a sensible practicum for collecting:

A large number of the trees forming these forests are still unknown to science, and yet the Indians, those practical botanists and zoölogists, are well acquainted, not only with their external appearance, but also with their various properties. So intimate is their practical knowledge of the natural objects about them, that I believe it would greatly contribute to the progress of science if a systematic record were made of all the information thus scattered through the land; an encyclopædia of the woods, as it were, taken down from the tribes which inhabit them. I think it would be no bad way of collecting, to go from settlement to settlement, sending the Indians out to gather all the plants they know, to dry and label them with the names applied to them in the locality, and writing out, under the heads of these names, all that may thus be ascertained of their medicinal and otherwise useful properties, as well as their botanical character. A critical examination of these collections would at once correct the information thus obtained, especially if the person intrusted with the care of gathering these materials had so much knowledge of botany as would enable him to complete the collections brought in by the Indians, adding to them such parts as might be wanted for a complete systematic description. The specimens ought not to be chosen, however, as they have hitherto been, solely with reference to those parts which are absolutely necessary to identify the species; the collections, to be complete, ought to include the wood, the bark, the roots, and the soft fruits in alcohol.

Gone, I see, “afield” in my query. So be it. “Pacyence come pryckyng with a sobre chere and hitte Ire in the helme that it flewe a feld.” (So readeth the fourteenth c. Booke of the Pylgremage of the Sowle by one Guillaume de Deguileville.) 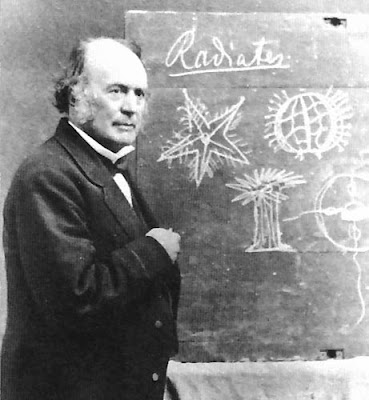 Jacques Burkhardt, “Ptychemys Rugosa,” out of Louis Agassiz’s Contributions to the Natural History of the United States of America, Volume II, 1857 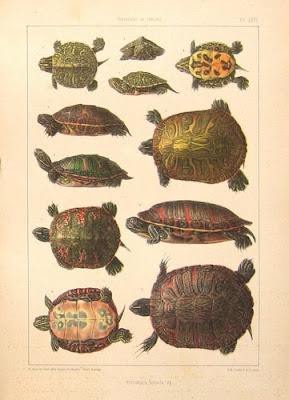 Jacques Burkhardt, “Variations of Species of Ptychemys Rugosa,” out of Louis Agassiz’s Contributions to the Natural History of the United States of America, Volume II, 1857