Entirely in the moment without
the tug of memory,
that
glory curtain, that low simplicity,
that facile lapse out of
irresolvable vacillating gist. The moment
undeter’d by abatement or stricture,
the green apple that green
apple, possibility of no other.

Battling time’s exigencies, the blank slate of sleep, &c. Philip Guston, out of “Statement in The New American Painting” (in Collected Writings, Lectures, and Conversations), whence the “tug of memory” line:

It is not always given to me to know what my pictures “look like.” I know that I work in a tension provoked by the contradictions I find in painting. I stay on a picture until a time is reached when these paradoxes vanish and conscious choice doesn’t exist. I think of painting more in terms of the drama of this process than I do of “natural” forces.
The ethic involved in “seeing” as one is painting—the purity of the act, so to speak—is more actual to me than pre-assumed images or ideas of picture structure. But this is half the story: I doubt if this ethic would be real enough without the “pull” of the known image for its own “light,” its sense of “place.”
It is like the impossibility of living entirely in the moment without the tug of memory. The resistance of forms against losing their identities, with, however, their desire to partake of each other, leads finally to a showdown, as they shed their minor relations, and confront each other more nakedly. It is almost a state of inertia—these forms, having lived, possess a past, and their poise in the visible present on the picture plane must contain the promise of change. Painting then, for me, is a kind of nagging honesty with no escape from the repetitious tug-of-war at this intersection.

(See Frank O’Hara’s “[Statement for The New American Poetry]”: “My formal ‘stance’ is found at the crossroads where what I know and can’t get meets what is left of that I know and can bear without hatred.”) (See, too, Ford Madox Ford’s notes “On Impressionism” (“a thing altogether momentary”):

It is . . . perfectly possible that a piece of Impressionism should give a sense of two, of three, of as many as you will, places, persons, emotions, all going on simultaneously in the emotions of the writer. It is, I mean, perfectly possible for a sensitised person, be he poet or prose writer, to have the sense, when he is in one room, that he is in another, or when he is speaking to one person he may be so intensely haunted by the memory or desire for another person that he may be absent-minded or distraught. And there is nothing in the canons of Impressionism, as I know it, to stop the attempt to render those superimposed emotions. Indeed, I suppose that Impressionism exists to render those queer effects of real life that are like so many views seen through bright glass—through glass so bright that whilst you perceive through it a landscape or a backyard, you are aware that, on its surface, it reflects a face of a person behind you. For the whole of life is really like that; we are almost always in one place with our minds somewhere quite other.

Ford writes of wanting to “attain to the sort of odd vibration that scenes in real life really have”—kin to Guston’s objects whose “poise in the visible present on the picture plane must contain the promise of change.” How to continue, how to keep the tension (“time’s exigencies” versus “blank slate of sleep”) contradictory and vif? Ford’s “odd vibration” produces—he notes—“something that is very like a Futurist picture—not a Cubist picture, but one of those canvases that show you in one corner a pair of stays, in another a bit of the foyer of a music hall, in another a fragment of early morning landscape, and in the middle a pair of eyes, the whole bearing the title of ‘A Night Out.’ And, indeed, those Futurists are only trying to render on canvas what Impressionists tel que moi have been trying to render for many years.”)

Or, desuetude in the orchard,
the two horses nickering and munching
the slightly under ripe wind-
fall, the barn expiring into
pre-weather’d board lengths, neglect
running the palm of its
dirty hand up under recovery’s
wont’d shirt. Hounds chorusing out
beyond the soybean fields, running
a rabbit to its hole.
Empty socket of earth unbung’d. 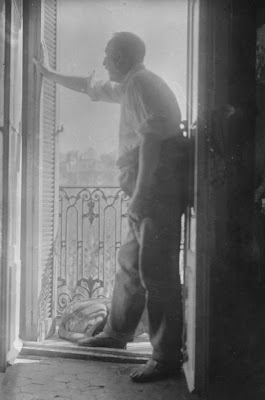 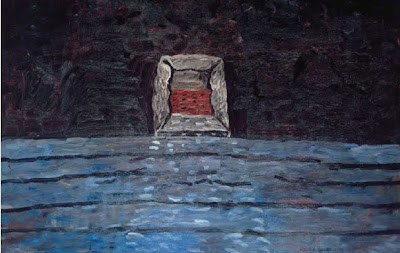 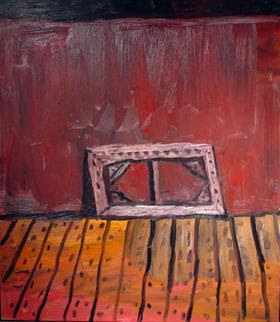