Ford Madox Ford (out of “Pound and How to Read,” reprint’d in Brita Lindberg-Seyersted’s Pound / Ford)

Writing as it today is practised is—consciously or unconsciously—a sort of pointillisme. You put point beside point, each point crepitating against all that surrounds it. That is what Ezra means by “charged” words. They are such as find electricity by fiction with their neighbours. That was the Flaubertian device—the Flaubertian trouvaille. Before anyone discoverable in the corridors of the literature that preceded him, he perceived that words following slumberously—obviously—the one the other let the reader’s attention wander. . . .
Properly considered, single words in themselves have no magic beyond possibly that of a certain euphony . . . no solitary word can be much “charged.” On the other hand when you put two or three together they come to life—or die.
So much I take it is generally accepted. It is when you come to the larger aspect of the conjunction of phrase with phrase, sentence with sentence, paragraph with paragraph that the matter becomes more obscure. That is finally the tyranny of the subject—of the idea. The whole of bouvard et pécuchet, as of madame bovary and éducation sentimentale, is one long protest against ideas following one on the other slumberously. . . .

Ford, spelling out New Sentence lineage—pre-New Sentence—for Pound. (Recall the provincial Silliman, never one to look beyond history’s momentary mud, blandly asserting: “The sole precedent I can find for the new sentence is Kora in Hell: Improvisations and that one far-fetched.” And: “I am going to make an argument, that there is such a thing as a new sentence and that it occurs thus far more or less exclusively in the prose of the Bay Area.”) (“Exclusively” proved exactly right.) Later Ford points to the “utter execrations”—of the untutor’d, the young, the American—fulminated “against the personality rather than against the technique of Flaubert” and remarks presciently: “That is how, fashions progressing, new markets are created.” Remarkable, seeing how relentlessly “achieved” (though now rather impropitiously” oversaturated) that particular “lingual” market’s proved to be. 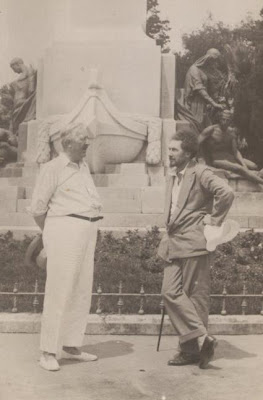