Robert Duncan, under “Eros” in The H.D. Book (University of California Press, 2011): “The work, the ground, and Eros lie at the heart of our study here. The work itself is the transformation of the ground.” Poetry is “a Making . . . the opus alcymicum”: its “rhymes”—results—being “correspondences, workings of figures and patterns of figures in which we apprehend the whole we do not see.” Duncan puts Psyche and Eros to work in a drama that “determines, beyond individual consciousness, the configurative image of a species”—presumably the work itself. Thus: “the would-be poet stands like Psyche in the dark, taken up in a marriage with a genius, possessed . . .” (Whence cometh, one thinks, Duncan’s 1987 Ground Work II: In the Dark) Duncan nods to an exemplary Williams (out of Paterson), “where Madam Curie works the pitchblende”:

And—finessing a little, the way contextual thievery finesses—quotes Williams writing (in Paterson, too), “Knowledge, the contaminant.” The upshot: a story of “Making” that is rampant with Romanticism writ big, Keats-style. See, say, Keats’s letter to Benjamin Bailey of 22 November 1817 wherein he talks of “the holiness of the Heart’s affections and the truth of the Imagination” and points to “the probable mode of operating in these Matters”: “The Imagination may be compared to Adam’s dream—he awoke and found it truth . . . I have never yet been able to perceive how any thing can be known for truth by consequitive reasoning.” And: “the simple imaginative Mind may have its rewards in the repeti[ti]on of its own silent Working coming continually on the spirit with a fine suddenness.” (See, too, certes, the “fine isolated verisimilitude caught from the Penetralium of mystery, from being incapable of remaining content with half knowledge”—early copyist (and sole source apparently of that particular letter) John Jeffrey, a Scot in Kentucky marry’d to the penniless Georgiana Keats, widow of Keats’s brother George, had it writ “insolated verisimilature”—and who’s to call him wrong, Keats in the clutch of mystery scribbling away “without any irritable reaching after fact & reason.”) (I find Keats’s reference to “Adam’s dream”—apparently out of Book VIII of Paradise Lost—a little confusing: for earlier (Book V) Milton puts “Fansie” in hock to Reason’s “joyning or disjoyning”—

But know that in the Soule
Are many lesser Faculties that serve
Reason as chief; among these Fansie next
Her office holds; of all external things,
Which the five watchful Senses represent,
She forms Imaginations, Aerie shapes,
Which Reason joyning or disjoyning, frames
All what we affirm or what deny, and call
Our knowledge or opinion; then retires
Into her private Cell when Nature rests.
Oft in her absence mimic Fansie wakes
To imitate her; but misjoyning shapes,
Wilde work produces oft, and most in dreams,
Ill matching words and deeds long past or late.

Mimic “Fansie” seems the “contaminant” here.) Duncan’s insistence that poetry-making occurs “in the dark”—“beyond individual consciousness”—isn’t it akin to A. R. Ammons’s stance of gain through loss (what he call’d “keeping oneself a little stupid”)? See something like the extraordinary little piece call’d “Offset”:

Losing information he
rose gaining
view
till at total
loss gain was
extreme:
extreme & invisible:
the eye
seeing nothing
lost its
separation:
self-song
(that is a mere motion)
fanned out
into failing swirls
slowed &
became continuum.

A Romanticism that posits the self at the center only to flood it with knowing in a transformatory move that irrevocably disperses it “throughout” (“continuum” or “the whole we do not see”). [Long period of perplexity and stubbornness. Looking to “knowings” in Ground Work.] Out of Duncan’s “The Dignities” (one of the series of “Passages”):

Blesst the black Night that hides the elemental germ,
the Day that brings the matter to light and its full term.
For goodness’ sake we’ll snuff the candle out and turn again to dark,
for there the spark occluded rests most     firm bright flower of what we know,     bonny fleur,
your seed returns to work in what we cannot know.

And, later: “we but follow a beckoning in measure haunted // ‘without actually performing any true computation at all’.” And, later (Keats’s “in uncertainties, mysteries, doubts” is call’d forth, part of the necessary “demeure” or lodging): “Wisdom as such must wonder for sortilege is all.” Duncan divinatory insistence kin to Ammons’s Emersonian eye. [One begins to assume Duncan’s cape, promissory and vague, admitting, too, that “weaving is necessary as I go, to keep many threads and many figures so that every thread is central and every figure central to threads and figures, with none coming to its conclusion but leading further into the process . . .”] 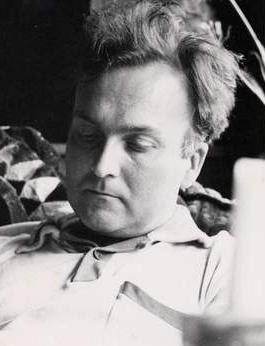