Onslaught of menial chores and squeeze plays―meaning one’s liable to dribble a do-nothing bunt down the line, mock-sacrificially, and hie on out of the box, only to be tagged out. (Robert Lowell recalls John Berryman visiting Pound at St. Elizabeths―“sitting on the floor hugging his knees, and asking with shining cheeks for Pound to sing an aria from his opera Villon. He saw nothing nutty about Pound, or maybe it was the opposite. Anyway his instincts were true―serene, ungrudging, buoyant.”) The “shining cheeks” kills me . . . and, drifting under the spell of a year (1972) that took both Berryman and Pound, I end up seeking Lamentations 3:63: “Behold their sitting down, and their rising up; I am their Musick.” A line Berryman’d used for an epigraph to 77 Dream Songs, capable of such parings-down of the American voice to its unsour’d jitney uncomplicatedness, yeah:

What he has now to say is a long
wonder the world can bear & be.
Once in a sycamore I was glad
all at the top, and I sang.
Hard on the land wears the strong sea
and empty grows every bed.

Or the dodge meticulousness and what Chaucer call’d Vmblesse (humbleness) of a remark like, “None of the extant definitions of poetry is very useful; certainly none is adequate, and I do not propose to invent a new one.” “I am their Musick.” That mystery of whence the inimitable proceedings—Saul Steinberg says “the smell precedes the cake” (he’s talking about “technique”—a fine admonishing for those who’d hang a shingle off a particular nouveau-ruse):

I’m captivated when I see a person who, by suddenly freezing into immobility, seems like a photograph of himself, and takes on a folk-art look. Photography has had a continuing effect on art. A painter such as Bacon clearly derives from the Polaroid, but at the same time it’s also true that art precedes technique, just as the smell precedes the cake. Bucharest, in the days of my youth, was a peculiar city, an enfant-prodige city, where the avant-garde cohabited with primitivism, as in certain places where two or three rivers converge and mingle, where there is something essential that has nothing to do with the ordinary character of the place, something that emerges at a particular moment when cultures, the forces of south, north, east, and west come together and give birth to a tornado, a typhoon, a waterspout, or if you like, an eddy—Dada.

Sly enough (Steinberg also notes—signs of the coming dumb-down—that “The whole Surrealist school tries to show man as a cliché, the standard figure copied on signs from the fashion journals of the day.”) And (with nouveau-ruse tuck’d in my hatband) recalls me monstrously to Berryman’s lines in Dream Song 364:

There is one book that Henry hasn’t read:
Ubu Roi. He feeling ignorant       whenever his mind brings it up.
Everytime anybody says
—Mr Bones, you has read everything—he singles out instead
Ubu Roi, to prove he is an idiot
and should be, as one, blest.

Cough and stall and rummage: I warn’d you up front. In Peter Bush’s translation of Juan Goytisolo’s legendary Juan the Landless (Dalkey Archive, 2009), a 1975 book revised by Goytisolo in 2006, there’s an apropos paean to “I / You” (ought to be plummet’d directly into somebody’s Ashbery dissertation):

impersonal pronouns, empty substantive shells! : your scant reality is the speech act by which you appropriate language and submit it to the deceptive control of your malleable subjectivity : empty wineskins, cellars at the ready, you offer yourselves up for promiscuous general use and collective social enjoyment : nuclear hermetic indicatives, nonetheless you pass on your uniqueness when with a mere squiggle of my pen I make you all jump to the diktats of my changing protean voices : the frequencies you broadcast over favor subtle sleights of hand, beyond ordinary communication : who’s expressing himself as I / you? : the shades wandering in your indispensable emptiness transmute, and you can skillfully play with signs your naïve reader doesn’t notice : immersing him in an unstable world, prey to a continuous process of destruction : assigning your scattered egos, the different parts in the choir, at the behest of the virtuoso flight of your baton : the pen gently running over the blank rectangle of the page

Music of that particular pickle (caught in a rundown). Why is it, hop-bless’d morn of the dogs unappeasable, that I find the failings and railings of Berryman so contravenable a solace?

I consider a song will be as humming-bird
swift, down-light, missile-metal-hard, & strange
as the world of anti-matter
where they are wondering: does time run backward—
which the poet thought was true; Scarlatti-supple;
but can Henry write it?

Wreckt, in deep danger, he shook once his head,
returning to meditation . . .

Think of Conrad Aiken’s talk of writing: “A sort of apocalypse, a seizure, the self becoming merely the invisible and nameless lightning-rod for an alien and unfamiliar lightning.” Think of William Dunbar’s “Lament for the Makers” with its thud of “ Timor Mortis conturbat me. The flesh is bruckle. 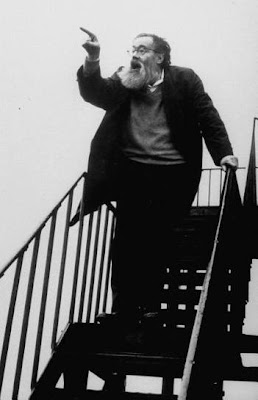