That Charles Ives line, “An apparent confusion if lived with long enough may become orderly,” put up against something out of William Davies King’s Collections of Nothing (University of Chicago Press, 2008): “I collect hardly anything that is collectible, not a thing anyone else would wish to collect, but at the end of the day, having myself wanted all these unwanted things, having procured them and organized them—filed, boxed, arranged, and fussed over them—I have a collection.” King collects, among other things, bottled water labels, “a book of water, containing at least one label from each of the following brands”—and a three-column’d list follows:“Aberfoyle, Absopure, Acquachiara, Adirondack, Aga, Alaska Glacier Cap, Albertsons’s A+, Alhambra, American Faire, American Star, Amish, Apollinaris, Appalachian, Aqua D’Or, Aquafina, Aqua-Pura, AquaVibe, Aquarel, Arctic Blue, Arrowhead, Artes, A Sante, Avra, Aziza, Badoit, Bailley, Ballygowan . . .” and so forth, ending with “Zagori, Zaro’s, Zephyrhills” some three pages along. What collecting (nothing) is: “A multiplicity of objects explainable only by the fact that in relation to each other they define a unity.” And: “owning something in quantity for reasons beyond pure need.” And:

The widely shared impulse to collect comes partly from a wound we feel deep inside this richest, most materialist of all societies, and partly from a wound that many of us feel in our personal histories. Collecting may not be the most direct means of healing those wounds, but it serves well enough. It finds order in things, virtue in preservation, knowledge in obscurity, and about all it discovers and even creates value. . . . Commanding value is an assertion of identity.

Which’d seem akin to writing, arrangements against the onslaught of the quotidian itch and its miasma of doubt. King’s attending to the everywhere collectible “nothing” of words, then, is hardly unexpected:

I also have a slim volume of found words that are (or were, at the time I found them) not words at all, just marketing concoctions or neolinguistic extravagance. These words are all clipped from some printed source. Here is an alphabetical sampling, in pairs:

A riff nigh-comparable to some of P. Inman, or David Melnick’s Pcoet (“dace, moapa / scleropages”)? (There is, too, a particular “breed” of writer who delights in the neologic—scrunchie, interrobang, popo. And one, too, for whom the attest’d orthographickal funk of something like “Werrse & werrse drinnchess, & / Att te lattste drunncnenn be . . .” Même combat. King trails off into the desultory: “These are the rare words, the hopefully floated, caught-at-a-glance, mostly expired words, with a few that stuck. I have a few hundred of them in a little rice paper book.” Though: isn’t there something in the “works” of the collector of nothing that corresponds to one version of the paradox of Modernism, that meaning resides only in practice, helter-skelter and vigorous (constant)? T. J. Clark, in “Clement Greenberg’s Theory of Art” (1982):

Modernism is certainly that art which insists on its medium and says that meaning can henceforth only be found in practice. But the practice in question is extraordinary and desperate: it presents itself as a work of interminable and absolute decomposition, a work which is always pushing “medium” to its limits—to its ending—to the point where it breaks or evaporates or turns back into mere unworked material. That is the form in which medium is retrieved or reinvented: the fact of Art, in modernism, is the fact of negation. . . . negation appears as an absolute and all-encompassing fact, something which once begun is cumulative and uncontrollable; a fact which swallows meaning altogether. The road leads back and back to the black square, the hardly differentiated field of sound, the infinitely flimsy skein of spectral colour, speech stuttering and petering out into etceteras and excuses.

Asserting value in stray bits of detritus—nothingness itself made “somethingness” by sheer accumulatory assembling (“Commanding value is an assertion of identity”) flips the negative ecliptic. Pursu’d unabidingly, that is to say, freely, such “work” becomes a nigh-political act in “this richest, most materialist” world. 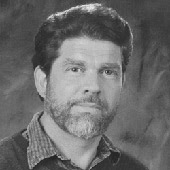 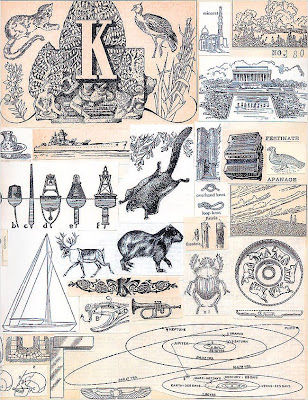 A page of dictionary art, collect’d by William Davies King