Plus la même chose. I rather like the story Dumitru Tsepeneag, exiled Romanian writing in French, adherent of “Jean Ricardou’s cleverly phrased idea that “the novel no longer implies writing about an adventure but recounts the adventure of writing,” tells about choosing the pseudonym of “Ed Pastenague”—in an interview append’d to Tsepeneag’s novel Pigeon Post (Dalkey Archive, 2008):

So as to avoid choosing a random name, I started playing with my own, in order to find an anagram that would be legible: Stepanege, Pangestene, etc. None of these were good. Pestange? Too pretentious. I ended up choosing Pastenague, thereby getting rid of one frightening letter “e” which dominates the French language and which can be pronounced in all sorts of different ways, so much so that the unfortunate readers have no idea how to say my name when they read it in print; so they give up on my name and the book altogether . . .
If you look up the word “pastenague”—which translates as stingray in English—in the standard French dictionary, here’s what you can read: “Stingray n. (Provençal: pastenago) Large ray found on European coasts, having a long, whiplike tail with one or more usually poisonous stings.” What a coincidence! The word sting is actually contained in my Romanian name (tsepe = stings).

And, “death of the author” (“coffin of the book”) talk. Tsepeneag, regarding reasons for writing directly in French:

I switched to French to please my French publisher, who told me that my books did not sell well and translations were very costly. He said: “Why don’t you write in French?” He was right, all the more so since what worried me in the process of translation was that my Romanian words were serving the only purpose of finding French equivalents for them—my translator’s words, the only ones that would be visible in the end. My words were mere passageways, humble and ephemeral ones, condemned to complete anonymity, buried at the bottom of a drawer. In any event, I couldn’t publish my books in Romania, they were forbidden there because I was an opponent of the communist regime. In such conditions, writing had become a sort of mortal execution: my words had to die that I, the writer, could survive as an author.
Even before I started writing in French, I published an article in which I attempted to describe my discomfort, my unhappiness with translation, which concretely kills the text and claims to be a sham [here one’d challenge the accuracy of the interviewer (Aude Jeanson)’s rendering, “sham” in the sense of “replacement”?], leaving only the author’s name on the cover. A translated author is left powerless, because he has no presence in the text itself. What better way of having a presence than through words! The cover holds the promise of an author, but “as soon as one opens the book, a coffin lid is being closed down.”

One notes that Tsepeneag, with the Romanian poet Leonid Dimov, found’d Onirism, “a synthesis between the Romantic Fantastique (“which continued with Expressionism and culminated with the genius of Kafka. It’s that German thread of the metaphysic—they were looking for the beyond in dreams . . .”) and Surrealism.” (Elsewhere, in the Review of Contemporary Fiction, Tsepeneag says Onirism “relies on making and constructing. The author is no longer the owner of an established meaning; he is simply a writer, the product of his own product. The text is an environment of transformation, a privileged space for metamorphoses.” And, in an interview in The Rumpus: “We could say that Romanian Onirism was born from painting and not from surrealist literature. The visual is primordial. Dimov said, ‘Dreams are not a source, but a canon, a legislative model.’ We don’t recount our dreams; we construct them with the materials of reality. We aren’t looking for God, psychic truth or authenticity, but for esthetic effect. That’s why I baptized our movement Structural, or Esthetic, Onirism. Dreams and music were our models.”)

Tsepeneag’s cache-cache (or “catch as catch can”) approach (“the adventure of writing”) in Pigeon Post:

. . . when I try to write my memories , I feel uneasy. I know that a good book contains the past and the present in an endless game of hide-and-seek that readers find enchanting. I also know, or at least I know it’s often thought, that memory—especially distant memory—triggers the crisis whence writing emerges: under the spotlight of our consciousness, memory becomes an object almost outside ourselves, like a pigeon, for instance, perched on a tree, or a little bicycle abandoned in an inner courtyard. But one might just as well presume—and this explains my unease—that memory, with its magic powers, its aura of nostalgia as enticing as a vacation brochure, leads inevitably to fake literature, for it maintains the illusion of realism, of an image whose genuineness is merely based on words, without relying upon them.

Caught. Rather like Flaubert’s lament que la parole humaine est comme un chaudron fêlé où nous battons des mélodies à faire danser les ours, quand on voudrait attendrir les étoiles. (“Human speech is like a cracked kettle on which we tap crude rhythms for bears to dance to, while we long to make music that will melt the stars.”) Hardly unexpect’d, that a writer caught so between languages’d jump to note the insufficiency of any kettle. Akin to what’s become a commonplace in translation theory: there is no “original” language—every linguistic sign or phrase is merely a conveyance for another sign or phrase (of the nonverbal world). Edith Grossman, out of Why Translation Matters (Yale University Press, 2010):

If writing literature is a transfer or transcription of internal experience and imaginative states into the external world, then even when authors and readers speak the same language, writers are obliged to translate, to engage in the immense, utopian effort to transform the images and ideas flowing through their most intimate spaces into material, legible terms to which readers have access. And if this is so, the doubts and paradoxical questions that pursue translators must also arise for authors: Is their text an inevitable betrayal of the imagination and the creative impulse? Is what they do even possible? 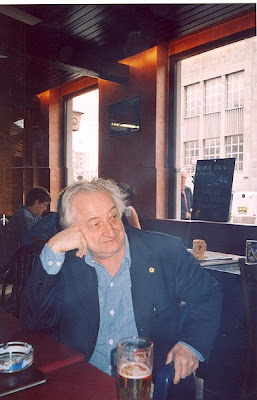