Up for the quotidian cough-up of the sun, its chorus of dislodging, light a kind of sputaminous drivel and clot (William Hazlitt: “‘Poets have such seething brains,’ that they are disposed to meddle with everything, and mar all.”) My habitual unpreparedness: cummerbund’d by a bloat of possibility. Hazlitt (who loves to quote himself), repeats the charge in the essay “On Paradox and Common-Place,” and adds:

They make bad philosophers and worse politicians. They live, for the most part, in an ideal world of their own; and it would perhaps be as well if they were confined to it. Their flights and fancies are delightful to themselves and to everybody else: but they make strange work with matter of fact; and if they were allowed to act in public affairs, would soon turn the world the wrong side out. They indulge only their own flattering dreams or superstitious prejudices, and make idols or bugbears of whatever they please, caring as little for history or particular facts as for general reasoning. They are dangerous leaders and treacherous followers. Their inordinate vanity runs them into all sorts of extravagances; and their habitual effeminacy gets them out of them at any price. Always pampering their own appetite for excitement, and wishing to astonish others, their whole aim is to produce a dramatic effect, one way or other—to shock or delight the observers; and they are apparently as indifferent to the consequences of what they write as if the world were merely a stage for them to play their fantastic tricks on, and to make their admirers weep. Not less romantic in their servility than their independence, and equally importunate candidates for fame or infamy, they require only to be distinguished, and are not scrupulous as to the means of distinction. Jacobins or Anti-Jacobins—outrageous advocates for anarchy and licentiousness, or flaming apostles of political persecution—always violent and vulgar in their opinions, they oscillate, with a giddy and sickening motion, from one absurdity to another, and expiate the follies of youth by the heartless vices of advancing age.

Citing, with an admonitory nudge, Southey and Wordsworth. Hardly tenable with the dud-trumpeting of Shelley’s “unacknowledged legislators” (mitigated somewhat by the lesser-beknownst “hierophants of an unapprehended inspiration” or “mirrors of the gigantic shadows which futurity casts upon the present”) or the surd-reverie of political efficacy of the avant-garde. (I see where Brenda Hillman’s claiming that it’s the fuck’d-up weather that is the source, burden, and requirement of “our” writing “funny”: “Weather taught / you to write funny. When it stops / being wrecked, we’ll write normally.” And, in an interview: “I sometimes think sentences have to be screwed up in exactly the same way as we’ve screwed up the weather.”* No, apparently, seething brain there.) (Interrupts—clunk—smother the train.) I think of B. S. Johnson’s self-portrait in Albert Angelo (1964):

He is orable for one thing for a nother he is a nosens
His face is like a back of a bus.
He is to big for his boots.
He is a bit of a film Star he acted the part of Carula.
He walks like a firy elelphant.
We all call him puw long of the elephant.
He has got hire like a goly-wog
All the clouth he wers are from the rag shop
I wouldnot say wot I think of him in publick

A thing located somewhere between the ding’d litany of Ashbery’s early “He”—“He is unforgettable as a shooting star. / He is known as ‘Liverlips.’ / He will tell you he has had a bad time of it. / He will try to pretend his pressagent is a temptress.”—and the preternatural itch unconfined of Christopher Smart’s Jubilate Agno: “Let Nebuchadnezzar bless with the Grashopper—the pomp and vanities of the world are as the herb of the field, but the glory of the Lord increaseth for ever. / Let Naboth bless with the Canker-worm—envy is cruel and killeth and preyeth upon that which God has given to aspire and bear fruit. / Let Lud bless with the Elk, the strenuous asserter of his liberty, and the maintainer of his ground. / Let Obadiah with the Palmer-worm bless God for the remnant that is left.” (Joel 1:4: “That which the palmer-worm hath left hath the locust eaten; and that which the locust hath left hath the canker-worm eaten; and that which the canker-worm hath left hath the caterpiller eaten.”) An approach reaching a hard-weather’d apotheosis in the straight pomp seething (and tomfoolery) of Ronald Johnson in Ark (“Beam 12, The Musics”):

Let the craters of Mercury trumpet first and last things from C to shining C.

Let The Magellanic Clouds be shot through with glissandi of migrations of great whales.

Let the hooffall of buffalo be heard again, in the land.

Let the idea of man’s split brain be a grace note among the silvery Pleiades.

(John 12: 45-46: “And he that seeth me seeth him that sent me. I am come a light into the world . . .”) One thinks of a common root for see and seethe, some smouldering vaporous stew of seeing. And there’s the sun—in the raggedy “clouth he wers.”

* Quoted in the Sarah Rosenthal edit’d A Community Writing Itself: Conversations with Vanguard Writers of the Bay Area (Dalkey Archive, 2010). 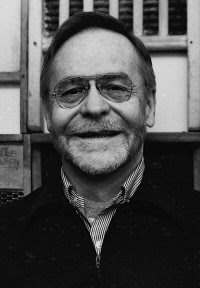