Flocculent clouds, unannotat’d by sun. What I wrote at the fag-end of a coarse-cloth’d weekend: stuck—neglect of the hectic and unmalign’d—in my strap-hanger’s bag at home. Dahlberg says: “This is an autobiography of my faults; were it an avowal of my virtues, I would have nothing to confess.” Consider the tittles here the specky deplorable bluings of a reprobate. Placeholder, proxy. (“All writing proxy to a gone world.”) (Crank’d out just Friday I think—“in the gloaming”—a piece poetickal of futility made of degraded materials and ending: “Language’s ruin’d me for the world.”) Emerson (Journals, 1852):

Poet sees the stars, because he makes them. Perception makes. We can only see what we make, all our desires are procreant. Perception has a destiny. So Fourier’s attractions proportioned to destinies.

I notice that all poetry comes or all becomes poetry when we look from within & are using all as if the mind made it.

Guy Davenport’s “Au Tombeau de Charles Fourier”: “La série distribue les harmonies. Les attractions sont proportionelles aux destinées.” And : “Give me a sparrow . . . a leaf, a fish, a wasp, an ox, and I will show you the harmony of its place in its chord, the phrase, the movement, the concerto, the all.” Chord of the orphan Dahlberg: “The commons were always the same: Monday was a goulash day; for Tuesday there was a stringy, tepid stew with a piece of fat as old as Methuselah’s toe. Every other Wednesday they got biscuits with raisins in them . . . On Thursday they got green-pea hash.” One Dahlberg series, thrown up against the irreparable disappearing self in the accidental motion of Time—“that boy who flits like a sapless phantom”—lost, forever lost—“What could I do? Ask the larvae of ants and the polypi, ask the eider ducks flying eastward?”: “I am more familiar with Theophrastus, Bartram or with Thoreau than I am with him.” Ant, polyp, eider. Theophastus, Bartram, Thoreau. John Clare in Epping Forest, 1840: “I found the poems in the fields / And only wrote them down.” Yesterday’s end of a day behind the wheel counter-chorus:

Finish’d a loose minuscule sixteen-liner with the dopey facility that arrives after driving in heavy rain half the day, jettisoning manœuverability in exchange for a steady songlike intent: it ends with a list of unpurchasables, “deer tick, / cottonwood, all of Egypt, up.” One misewell allow the lightning rod of the body, prone to conductor-like flailings, its reversals and juts. (Limbic system of all thinking stop’d, the self-preservatory hairs “out,” the tensed musculature firing adrenals into the “system”—isn’t that the way to write, skidding around the suddenly braking Buick with the bicycles a-toggle off the back?) Anyway: here we are. As Dahlberg says (Because I Was Flesh):

Our past is our only knowledge, and, good or ferocious, it is, for sublime or baleful purposes, the sole viaticum of the spirit. We can digest our childhood but never our present deeds, because no one knows what he is doing while he is doing it. The present is an absolute sphinx to men. Had Peter really known that he was walking on water, he could not have done it, for every act, small or great, is a veiled trance.

‘Arise out of twofold potency.’ Write that in the trap of the actual

legitimized by sleep, or blacking out at the resolution of detail and time

Unscript’d the seas, the blank pages, large enough for a Leviathan to dunk itself in, undeliverably, prodigally. Kin of the tactile axioms (I know not what I am “saying.”) Home, too, to volumes of Emerson’s Journals. Out of one—Selected Journals, 1841-1847 (Library of America, 2010)—avidly breezing: “A reader of profound apprehension has an equality to the greatest poet.” Constructing meaning in Concord (1873, though E. notes “I add from my old MSS.”), Emerson the Language boy. 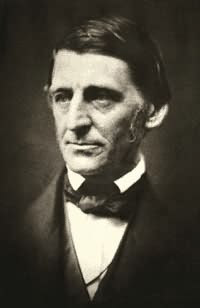