Between driving sprees, snout perfunctory in George V. Higgins’s The Friends of Eddie Coyle, for the scuttlebutt talk of men used to bullshitting. About a “Hirst shifter” (“You let that thing out a few times and pretty soon you got this loud noise in the scatter shield. Or else she misses a shift on you and you got valves coming up through the hood like bullets.”), about (circa 1972) “joining a commune” (“I heard about this place up near Lowell, everybody welcome, you take off your clothes and screw all day and drink boysenberry wine all night. Trouble is, I hear all they get to eat is turnips.”) All rippy and copacetic in the lingo line, a tightly-strung bow with a quiver full of single-flighters. Nothing, mark hit, to retrieve. Uncover’d, oddly enough, a copy of New Directions’s original 1967 “paperbook” reissue of Williams’s White Mule (1937) with its plain white cover and Alfred Kazin remarks (out of The New York Times) reprint’d

Open Dr. Williams’s book and you are in a new world of sound. Accents cling to the air. The harmony is the rough gravely ironic rhythm of public speech. Like James Joyce, whose blindness has sharpened his extraordinary musical ear, Dr. Williams has his characters talk with such a native freshness that the sound is never obtrusive. It is a pure speech because it is so richly characteristic, and its utter realism is therefore deeper, more meaningful than the violent accuracy of naturalism.

That final sentence a species of reviewer’s sleight of hand, meaningless filler. Another quote suggests it’s “as though Joyce were to write Studs Lonigan”: one might measure out a history of anomaly by means of counting the shifting hegemony of references “hardly apropos”—see, say, Dan Chiasson’s entirely awkward piece “Entangled” in a recent New Yorker, how he (repeatedly) explains (away) Rae Armantrout, grabbing one (short) straw after another: “Somewhere behind this poem is 9 / 11 (when ‘breaking news’ became standard fare)” (hunh?), or “Like Ashbery’s Self Portrait in a Convex Mirror, Versed is the kind of crossover book that makes the border disappear.” Look, too, at the total anxiety in Chiasson’s final lines—attempting a light-heart’d riff off Frost’s “We dance around in a ring and suppose, / But the Secret sits in the middle and knows”—: “Poets like Ashbery and Armantrout are secret-keepers. For the rest of us, there remains the huge pleasure of supposing.” A nod—unsolicit’d, probably unintend’d—at the “genuinely experimental” (Chiasson’s words)’s assuming the center (where silence and pretence serve mostly to prolong the power arrangement.)

Isn’t that just post-trajectory hooey coming unstuck? All the accumulating detritus of the road―philtre of brain mitochondria mix’d with tawny crevice dust―pour’d out of its vial unsluiced? (I see the Charles Ives in Ronald Johnson’s “The Different Musics” (1969’s Valley of Many-Colored Grasses) I miss’d: “An apparent confusion if lived with long enough / may become orderly.”) And (distract’d by Johnson):

And the under ooze & loose loam of slug & worm.)

Oddly recalling A. R. Ammons’s processuals of muck and decay (Denise Levertov select’d both poets for Norton). See something like “Preserving the Magnitude of Uselessness” out of Ammons’s Uplands (1970):

Spits of glitter in lowgrade ore,
precious stones too poorly surrounded for harvest,
to all things not worth the work
of having,

brush oak on a sharp slope, for example,
the balk tonnage of wood-lodged boulders
the irreparable desert,
drowned river mouths, lost shores where

the winged and light-footed go,
take creosote bush that possesses
ground nothing else will have,
to all things and for all things

crusty or billowy with indifference,
for example, incalculable, irremovable water
or fluvio-glacial deposits
larch or dwarf aspen in the least breeze sometimes shiver in―

suddenly the salvation of waste betides,
the peerlessly unsettled seas that shape the continents,
take the gales wasting and in waste over
Antarctica and sundry high shoals of ice,

probably,
rank as weeds themselves and just as abandoned:
nothing useful is of lasting value:
dry wind only is still talking among the oldest stones.

Detect’d (typing) an echo of Hopkins’s “All things counter, original, spare, strange” somewhere there, though I suspect the Williams of Spring and All’s “contagious hospital” presides here: “the / waste of broad, muddy fields / brown with dried weeds, standing and fallen // patches of standing water / the scattering of tall trees. . .” Williams (and how men talk):

I suppose we’re gonna get the God damn Government Contract again this year, said Carmody, one of the pressmen.
Why not? came back from one of the others near him. You ought to be glad you got a job to keep you from starvin’—the way you did last winter.
I suppose they’ll be havin’ a cop standin’ behind us next when we’re workin’ and send us all home in the Black Maria for safe keepin’. You can tell what’s up when you see old parrot feet sittin’ at his stall that way this time of the morning.
Aw go wash your drawers, said another of the men near him. Your old woman’s sinkers is killin’ you.
Christ, you guys has got a lot of wakin’ up to do, youse guys—if you think you’ll ever get a break around this place—as long as that tamale is sitting over there in the corner—pointing to Joe at his desk.
Aw shut up, said the one who had first answered him.
A fine labor leader he must a bin. Who the hell do you think he’s workin’ for? Youse? He paused a moment. That’s what happens when they come up from the ranks, they turn on you and work the hell out of you for old time’s sake. I got that little Dutchman’s number a long time ago.

White Mule. Williams’s language (famously) out of “the mouths of Polish mothers.” Two ears: one “for speech,” the other for composing “in the sequence of the musical phrase.” The dialogic ear versus the musical ear. Pound’s is “musical,” Williams’s is probably “dialogic.” Zukofsky probably had both: see, certes, “the American language as she is spoke (oreye mush blige) . . .” 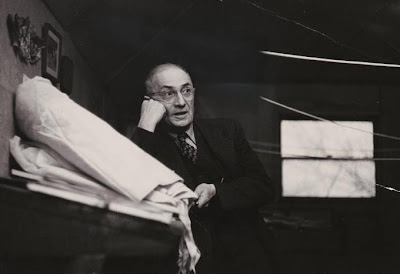