Took in my maudlins by the story of Melville’s friend aboard “the naval frigate United States,” one “fellow New Yorker named Ephraim Curtiss Hine . . . who snatched every moment he could to write poetry.” (The story’s in Andrew Delbanco’s 2005 biography of Melville):

Fearful that his poems would be disposed of in one of the bouts of sweeping and scrubbing at which the crew was periodically set to work, Hine stuffed his manuscript for safekeeping into a ship’s cannon by ramming it in with the “tompion,” a sort of plunger kept in place in the barrel to keep out the sea spray. When the ship fired a volley in return to a salute from a shore battery somewhere off South America, he arrived too late at the sheltering gun to save his work-in-progress, which had been blown out to sea in shreds. Jack Chase, whose name Melville retained in White-Jacket, consoled him with words that were later to register on Melville, whose own publishing career was to have its share of misfires:

Never mind, my boy, no printer could do the business for you better. That’s the way to publish . . . fire it right into ’em; every canto a twenty-four-pound shot; hull the blockheads, whether they will or no. And mind you, . . . when your shot does the most execution, you hear the least from the foe. A killed man cannot even lisp.

That’s in the chapter call’d “Publishing Poetry in a Man-of-war.” Hines seemingly regain’d (or redid) enough “shreds” to arrange, in 1848, for the private printing (back in hometown of Auburn, New York) of a volume call’d The Haunted Barque. The beginning of the title piece:

Night hovers o’er the furrowed deep,
And plaintive is the sea-bird’s cry,
The stars through azure windows peep,
While gentle winds come whispering by;
The sun, which like a fiery globe
Was burning on the western wave,
Hath wrapped himself in dusky robe,
And laid him in his watery grave:
The dolphin tints of dying day,
Grow fainter in the paling sky,
Like hectic flush that fades away
From mortal cheek when death is nigh . . .

Which hotch-potch’s up a rather achronological sequence of inept borrowings—though I do flush a little un-hectically (that is, without turning consumptuous) to the “dolphin tints.” In White-Jacket, the “gun-deck bard”’s sea-scatter’d volume’s titled Songs of the Sirens, apparently a second collection:

“I’m a poor devil of a poet. Not two months before I shipped aboard here, I published a volume of poems, very aggressive on the world . . . Heaven knows what it cost me. I published it . . . and the cursed publisher sued me for damages; my friends looked sheepish; one or two who liked it were non-committal; and as for the addle-pated mob and rabble, they thought they had found out a fool. Blast them . . . what they call the public is a monster, like the idol we saw in Owhyhee, with the head of a jackass, the body of a baboon, and the tail of a scorpion!”

Owhyhee = Hawai’i. I love Melville for the nay-saying skeptical petulance and refusal. Somehow it recalls (tout à coup) Walker Percy in The Moviegoer (1961) in the words of Binx Bolling: “Hatred strikes me as one of the few signs of life remaining in the world. This is another thing about the world which is upsidedown: all the friendly and likable people seem dead to me; only the haters seem alive.”

Shreds and fragments. Pondering, too, Zukofsky’s tilt in “Sincerity and Objectification, with Special Reference to the Work of Charles Reznikoff” (1931):

In sincerity shapes appear concomitants of word combinations, precursors of (if there is continuance) completed sound or structure, melody or form. Writing occurs which is the detail, not mirage, of seeing, of thinking with the things as they exist, and of directing them along a line of melody. Shapes suggest themselves, and the mind senses and receives awareness.

Isn’t that both a call to allow the words loose rein—tether’d only, or largely, by music (see O’Hara’s “you just let all the different bodies fall where they may, and they always do may. . .”)—a kind of pure trust in the materials (that exist outside oneself (see Spicer’s Martian diktat nod), and, oddly enough, a refusal of the fragment (“completed sound,” &c.)? Though, there’s apparently sincerity uncompleted, too: “Presented with sincerity, the mind even tends to supply, in further suggestion, which does not attain rested totality, the totality not always found in sincerity and necessary only for perfect rest, complete appreciation.” (Which is the “objectification” half of the bargain: “the apprehension satisfied completely as to the appearance of the art form as an object.”) One ponders the fancy of the Language gang for Zukofsky, if, in fact, one heeds a call for the poem to “resolve into a structure . . . to which the mind does not wish to add; nor does it, any more than when it contemplates a definite object by itself.” Sounds like a well-wrought urn to me. (And what to do with Zukofsky’s “The revolutionary word if it must revolve cannot escape having a reference. It is not infinite. Even the infinite is a term” lines in “An Objective”?) (Long bandy’d: the idea that various absolutist New Critical tenancy—inseparability(parsed: unity) of form and content, “form is meaning”—is (routinely spurn’d) home turf to Language writing.) So goeth the morning—ought to’ve stuck to Owhyhee. I admit it: I “got” to Zukofsky by wondering if Lorine Niedecker’d read Melville. No sign of it. Though she did say (in a letter to Edward Dahlberg, January 4, 1956): “Alfred North Whitehead thinks civilization is going to get a new start in grass-roots Midwest so I’ll see what I can do while you are in the woods of New York.” And (to Zukofsky himself, “dated by LZ: Apr. 29/45”):

Time is nuttn in the universe. The elephant may be on his way to becoming a worm, and vice versa, as a species, I mean. All of which I wanted to say in my poem but didn’t quite. “Fontenelle’s rose saying that within the memory of a rose no gardener had been known to die.” (This is the loveliest and most important thing I’ve read in a long time.) 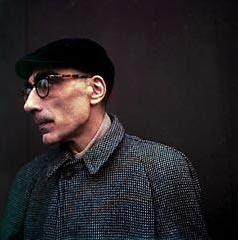