Some Tiresome Mewling (With Parentheses)

XCII
Loquacity in traffic. My art excludes nothing, is the whole God-
Damn junkyard yelps out one maker. The other demurs with a smug
Petulance, props up a select audacity, the precise is count’d high
Amongst divinity’s demands, art temper’d in the mean fires of choice
Embellishments. It’s the hoverer, the straddler cant’d out between the two,
Uncertain dipper in two liquors, it’s he who avoids the prig-stringencies of
The two. Though to decide to forego deciding stretches one whole cloth
On tenterhooks, indifferent as a tarpaulin or a trampoline. Losing one’s
Divinity, just a specimen-clot’d rag slung in a corner. That’s the kind of
Thing’s liable to rev a chance vernacular, make a man into a machine
Of barks and twitches, now shutting down entirely, now gearing up
To hurdle the welter. Rain-soak’d tangibles (blue-glass bottles, bedsprings,
A splay’d 1910 edition of Black’s Law Dictionary with a scant deposit
Of scat, cylindrical, segment’d, blunt, likely skunk) in a ravine cross’d by a strut-
Work bridge apt to collapse under the centrifugal push of any sudden full-
Throttling.

What to do with Beckett’s word Apmonia? (In a fit of regulatory upheaval, attempt to flag down the flagman of my inertia, I prop’d myself hier soir between Beckett’s Murphy and James Knowlson’s 1996 Beckett biography Damned to Fame, prepping myself for the Letters, assuaging the listlessness irksome and caterwauling with the quid pro quo apothecary’d listlessness risible of Beckett. Murphy tied to a rocking chair (and madly rocking) (“Seven scarves held him in position. Two fastened his shins to the rockers, one his thighs to the seat, two his breast and belly to the back, one his wrists to the strut behind”—which is, oddly enough, only six) in order to appease the body’s need for pleasure (“Then it set him free in his mind”)—surely a gussy’d up version of the schoolboy’s jacking off in order to get down to studying. The whole opening—a strafing attack of opposites (Neary says: “Murphy, all life is figure and ground”)—rather “post-monitiously” (Here’s something odd: just now, looking for that word, wondering idly if it’d “work” (exist’d), antonym to “premonition,” I toggled the O.E.D., only to read:

1938 S. BECKETT Murphy ix. 176 In the morning nothing remained of the dream but a *post~monition of calamity.

My premonitious anticipatory outing (I only got twenty or so pages into the thing), focussing mostly on the biography . . .) Opposites: because I sweat’d through (talk about a clotted rag in the corner, here I pull up every word like a calamity-shouting mandrake root, insufferably jeering, protesting, diving back into the pot of potting soil whence removed, disaster-city, hinges of the brainbox mewling out a need for recuperant grease)—because I sweat’d through the jiggery-pokery above (XCII, that “seizure”), thinking I had an “idea” (always a foul way to proceed) about making (selecting versus cramming, same old same old Ashberian “put it all down” or “leave all out”), and how it’s probably in the silver interstices (the golden mean) that the godly lies (for the godly doth lie)—because of that I read the opening pages of Murphy “in that light.” Par exemple: the diastole and systole of Murphy’s hand clench’d to the rocker: “The knuckles stood out white under the skin in the usual way—that was the position. The hands then opened quite correctly to the utmost limit of their compass—that was the negation.” Or: Neary’s Poundian (Métro) remark regarding “The face . . . or system of faces, against the big blooming buzzing confusion.” (Neary neatly mocking the jaded Classicism of Pound’s couplet (it’s got no “stink of being” is what Artaud’d say) by adding immediately “I think of Miss Dwyer,” of whom he wants to “gain the affections . . . even for one short hour.”) Neary, certes, is opposed to Murphy by being utterly capable of bodily control:

This man, at that time, could stop his heart more or less whenever he liked. The rare faculty, acquired after years of application somewhere north of the Nerbudda, he exercised frugally, reserving it for situations irksome beyond endurance, as when he wanted a drink and could not get one, or fell among Gaels and could not escape, or felt the pangs of hopeless sexual inclination.

Or: Murphy’s stance of considering “alternately the sky and a piece of paper.” (The writerly condition.) And Apmonia? It is here:

Murphy’s purpose in going to sit at Neary’s feet was not to develop the Neary heart, which he thought would quickly prove fatal to a man of his temper, but simply to invest his own with a little of what Neary, at the time a Pythagorean, called the Apmonia. For Murphy had such an irrational heart that no physician could get to the root of it. Inspected, palpated, ausculated, percussed, radiographed, and cardiographed, it was all that a heart should be. Buttoned up and left to perform, it was like Petrouchka in his box. One moment in such labour that it seemed on the point of seizing, the next in such ebullition that it seemed on the point of bursting. It was the mediation between these extremes that Neary called the Apmonia. When he got tired of calling it the Apmonia, he called it the Isonomy. When he got sick of the sound of Isonomy he called it the Attunement. But he might call it what he liked, into Murphy’s heart it would not enter. Neary could not blend the opposites in Murphy’s heart.

I do so eagerly want to make it somehow akin to “apanthropy,” a species of melancholia mark’d by a dislike of human society, a desire for solitude—making the ap- away from, the -monia akin to “monad,” unity, one. Not so (and making a word by mashing Greek- and Latin-derived particulary up against one another, nunh unh). Apparently, Apmonia puns on the upper-case Greek for “harmony”—central to Pythagorean principles of an orderly (and mathematically explicable) universe. Murphy’s “irrational heart” kin to the unharmonious, the fly in the ointment of the Pythagoreans, the irrational number, the surd, the deaf excess unassimilable into the music of the spheres.

What I like: how the telephone—ringing whilst Murphy’s in mid rocking manœuvres—first is said to “burst into its rail.” And, later: “The loud calm crake of the telephone mocked him.” Rail and crake. If ever I undo the scarves binding me to the chair of my unregulated peevishness and foul-manner’d slumming amongst the possible unwrit outcries about, well, everything—I’ll sit back down and write “The Birds of Beckett,” beginning with the gull-eyed unpreen’d look of the man himself.

Off tomorrow to the husky, brawling city, dieux merci. Monday. 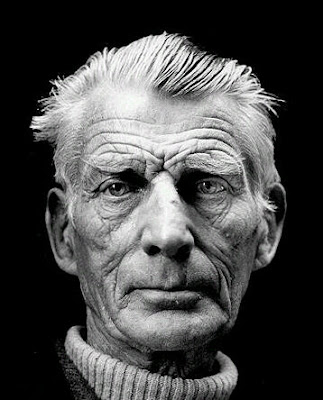