Nothing in the Hopper III

“Such a Jocund Company”

CXVII
Of opera Morton Feldman
liked to joke that

the overture is what
one composes while waiting

for the libretto sostenuto
to arrive. (He wait’d

for Beckett’s, who detest’d
opera.) So one examines

the dottles of rain
for ‘intelligible pitch relationships’

or dumps a scoop
of words, collect’d out

of the common bucket,
out to riffle cursorily

through, running abruptly out
in front of whatever

self is spoiling for
a sketch today. Of

tomorrow’s muck we know
not lots, a pout

is not an attitude.
To find by chance

a gait of sorts
out of sorts thrown—

‘to and fro’ we
human containers unattainably go.

I added that “sostenuto”—“I needed a word.” “It’s a place-holder.” Feldman liked, too, to repeat a line of Charles Péguy’s: “Everything begins as a mystique and ends in politics.” That longing to shunt oneself back to first impulse, whatever eddy and vortex of forces ’d brought one to the point of making a mark in all innocence against the impossibly pure slate of the page. Hein? Of course one only allows that as a half-belief tuck’d away like a model ship in a bottle, with some banal rationale (“I had excess time on my hands”), although: there is a period, and golden it is, God knows, before one’s blessèd aesthetic struggle all-consuming and divine becomes “merely” another ingredient in the larger political struggle of art. (That Hemingway line like a fly—am I trying to say shit-detector?—bombards the tipsy scenario: “Isn’t it pretty to think so.”) Feldman (talking to Robert Ashley in a 1964 interview in Kulchur):

It seems that about ten or fifteen years after something new and original is done and has its first impact, that impact becomes a political one. That is to say, by the time the young composer gets in touch with a particular work, it is already in a power struggle with other works and other ideas. The intention, the aesthetic of the work may be a complete mystery to this young composer, but in the form of politics it is not a mystery. It is very concrete. So what the young composer does is to become a revisionist. We know from history that it is the revisionist who takes things from the mysterious region of originality and gives those things a man-made rationale. . . . . I mean that the human comes in and makes a synthesis which he can work with comfortably—a concrete synthesis. And so what happens is that the original—that which was pure, that which was like nature, that which didn’t seem to reflect a ‘human’ point of view—is cast aside or rather, to be more precise, is incorporated by the revisionist mind.

Certain rumblings of where Feldman’s “revisionist” fits into Pound’s collapsible scheme of inventors (“discoverers of a particular process or of more than one mode and process”—inventors, one notes, like God, are not always “discoverable”); masters (those “able to assimilate and co-ordinate a large number of preceding inventions”—which “co-ordination” sounds suspiciously political and revisionist to me); and diluters (dragging forth items of “lower intensity”). One tends to forget the unnamed other three items of Pound’s list, the awkwardly put “men who do more or less good work in the more or less good style of a period” (defined by the lovely pooter: “Ils n’existent pas, leur ambiance leur confert une existence”—“They hardly exist at all, only their being spotted full in their own milieu confers any existence”); the rather vague “Belles Lettres” (“who can hardly be said to have originated a form, but who have nevertheless brought some mode to a very high development”); and “the starters of crazes . . . whose wave of fashion flows over writing for a few centuries or a few decades, and then subsides, leaving things as they were” (note the tremendous leeway—“centuries”—built in to the definition, and yet, as Beckett says somewhere, “What truth has not its ballcock?”—fashion, if anything is, is a self-regulating system.) Oddly enough, there’s something almost a little naïve about Pound’s list—as if Poundian “men” were somehow purely “aesthetical” and didn’t cotton to art’s political machinations and struggles. Feldman is perfectly clear. Talking about chance procedures in the hands of late interlopers like Stockhausen and Boulez, he says:

Whose special-pleading imploratory attempts to ‘humanize’ (providing voice for the chat-room subaltern) more than the flarf groupuscule rehashers? For the portentous combined rollickingly with the beseechingly human, look here (Kenneth Goldsmith talking to Marjorie Perloff):

Solioquy presents speech at its most raw, its most brutal and in its most gorgeously disjunctive form. When we look at ‘real’ speech in Soliloquy, we find that our normative speech patterns are avant-garde! It strikes me odd that what modernism worked so hard to get at for the past 100 years has always been right under our noses!
In terms of the social aspects of the piece, it’s very complicated. I have lost many friends over this work. I do feel bad that their feelings have been hurt but I still cannot apologize for having done the piece. 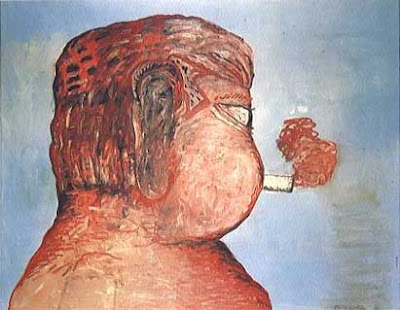