CXI
Nothing like a hungry prattler to make one goatish, up-
Welling and tense. I completely tire of history and all its
Artless viands, it meaty hoydenish hubris of fact. I’d like it
If some insane Victorian smutted my books, throwing back
Her skirts, balancing a hat shaped like a miniature Egyptian
Sarcophagus. A catastrophe-tickler, putrid with necessity. I do
Try to abide by the unsworn affidavits of inessential kindness in all
My doings, so there’s little call for a row, all that up-
Welling and lacrimae, enough to launch a punt or dinghy or skiff.
After a bold delay comprised of the item-by-item detailing of the baleen
Trade’s works and days, ‘The Castaway’ recounts how Pip, who jumped
Out of Stubb’s boat in terror at the first charge of a harpooned whale,
Got left floating for so long by the boat crew—bent inflexible by blubber-
Lust—that he got made an idiot by the shock, and so provided
The ‘predestinated’ ship ‘with a living and ever accompanying
Prophecy of whatever shattered sequel.’ Beshat’d sequel. Or so says
A man who claim’d bibliographical nuance supererogatory (more or
Less).

Adorno (Aesthetic Theory): “Dissonance congeals into an indifferent material; indeed, it becomes a new form of immediacy, without any memory trace of what it developed out of, and therefore gutted and anonymous. For a society in which art no longer has a place and which is pathological in all its reactions to it, art fragments on one hand into a reified, hardened cultural possession and on the other into a source of pleasure that the customer pockets and that for the most part has little to do with the object itself.”

Cole Swensen (American Hybrid: A Norton Anthology of New Poetry): “Today’s hybrid poem might engage such conventional approaches as narrative that presumes a stable first-person, yet complicate it by disrupting the linear temporal path or by scrambling the normal syntactical sequence. Or it might foreground recognizably experimental modes such as illogicality or fragmentation, yet follow the strict formal rules of a sonnet or a villanelle. Or it might be composed entirely of neologisms but based in ancient traditions. Considering the traits associated with ‘conventional’ work, such as coherence, linearity, formal clarity, narrative, firm closure, symbolic resonance, and stable voice, and those generally assumed of ‘experimental’ work, such as non-linearity, juxtaposition, rupture, fragmentation, immanence, multiple perspective, open form, and resistance to closure, hybrid poets access a wealth of tools, each one of which changes dramatically depending on the others with which it’s combined and the particular role it plays in the composition.”

Adorno: “. . . in the age of overproduction the commodity’s use value has become questionable and yields to the secondary gratification of prestige, of being in step, and, finally, of commodity character itself: a parody of aesthetic semblance. . . . To this extent the contemporary attitude to art is regressive. What is consumed is the abstract being-for-other of the cultural commodities, though without their actually being for others; by serving the customers, they themselves are betrayed. The old affinity of the beholder and the beheld is turned on its head. Insofar as the now typical attitude makes the artwork something merely factual, even art’s mimetic element, itself incompatible with whatever is purely a thing, is bartered off as a commodity. The consumer arbitrarily projects his impulses—mimetic remnants—on whatever is presented to him.”

Beckett (in a 1932 letter to Thomas MacGreevy): “To know you like the poem cheers me up. Genuinely my impression was that it was of little worth because it did not represent a necessity. I mean that in some way it was ‘facultatif’ [optional] and that I would have been no worse off for not having written it. Is that a very painless way of thinking of poetry? Quoi qu’il en soit [Whatever may be] I find it impossible to abandon that view of the matter. Genuinely again my feeling is, more and more, that the greater part of my poetry, though it may be reasonably felicitous in its choice of terms, fails precisely because it is facultatif whereas the 3 or 4 I like, and that seem to have been drawn down against the really dirty weather of one of these fine days into the burrow of the ‘private life’, . . . do not and never did give me that impression of being construits [constructed]. I cannot explain very well to myself what they have that distinguishes them from the others, but it is something arborescent or of the sky, not Wagner, not clouds on wheels; written above an abscess and not out of a cavity, a statement and not a description of heat in the spirit it compensate for pus in the spirit.”

D.—Why is he obliged to paint?

D.—Why is he helpless to paint.

D.—And the result, you say, is art of a new order?

(An attempt to sort and suggest without intervening.) 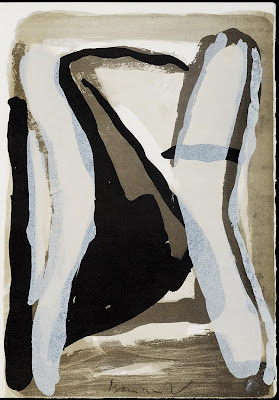 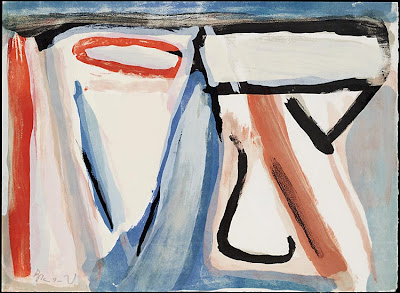