XCIX
My loutish scowl retrofit and muy nothing penitentes, my Rikers
Island tattoo crudely-ink’d Zorro caliente getting blotchy, tense
With the word’s fricatrice-ubiquity rubbing a thigh here, dropping
Plus fours halfway down a fuzz’d butt: one deploys all kinds of
Mischief in wild semi-reticent try-out, trying to pump up
A cantileverish versicle or two, some slutty simulacrum un-
Gull’d by mere vocabulary-randy jamming. And fails
To see the tuft’d titmouse in the buckthorn working the shrivel’d
Berry crop, that plunder-got grace. Fails to see the sun-pierced
Rust leeching through the high-buffet’d hawk’s fanned out tail,
Color of a bookplate or a frontispiece: “lightly fox’d.” I seek
A shelter low, unprincipled and imperishably serene: a place simple
As snot. Place where the dog’s cameo turn as the dog goes un-
Noted, shot in black and white. Place where unwash’d clouds in churchy
Whites tumble down out of the paint-radiant blue, forsook
Spawn of the gods, and a red tractor is manœuvre’d in diminishing
Circles. Place where the snub-nosed barrel of the moon pushes up
Against the skin of night and a man who misses a man simply says
So.

Swept up by a stray authentic runnel of hot sentimental magma (who said goo?), probably the result of leafing through Jim Harrison’s newest book of poems, In Search of Small Gods (Copper Canyon, 2009). Harrison’s a Michigander, had a farmhouse out the Leelanau (a peninsula)—maybe I cut slack for that. I recall seeing him read circa 1970 here in Ann Arbor, a barroom-friendly loud man in a floral Hawaiian shirt, bolster-chest’d, with that gamey wild eye. The new book’s full of birds and dogs and getting old, that teetering period (it begins early in some) that wholly accepts one’s own onrushing mortality and tangles with it just like tugging a stick out of the lock’d-down teeth of a toy-growling dog, some mirey tangle of half-welcoming it, half saying fuck off). Here’s “New World”:

This moment says no to the next.
Now is quite enough for the gathering birds
in the tall willows above the irrigation ditch.
It’s autumn and their intentions are in their blood.
Looking up at these chattering birds I become dizzy,
but statistics say old men fall down a lot.
The earth is fairly soft here so far from the world
Of cement where people must live to make a living.
Despite the New Covenant you can’t eat the field’s lilies.
Today I think I see a new cold wind rushing through the air.
Of course I stare up too long because I love cedar waxwings,
Their nasalate click and hiss, their cantankerous joy.
I fall and the dogs come running. Mary licks my face.
I tell them that this is a world where falling is best.

Is it the damp inspecific religiosity here that reminds me slightly of some of Charles Wright’s work? There’s a clumsy directness here—put down one sentence, put down the next sentence, say nothing meretricious, gussy nothing up. (Is one excepting “Their nasalate click and hiss, their cantankerous joy”? Maybe, though one’d argue it echoes mostly the precisions of the field guide, with a smudge of Peterson’s tendency to anthropomorphisms.) It is not a poetry that preens, or is sucker’d under by any perceived period stylish need (there is no syntactical re-booting, no aimless fragging, no typographic scrambling, no dudding out sentiment with cheap irony). (Such is, undoubtedly, Jim Harrison-the-novelist’s freedom: the freedom of the amateur, the unalign’d.)

I dug out my copy of Harrison’s Outlyer and Ghazals, (Simon and Schuster, 1971) a book that touts (in a biographical sketch) Harrison’s “voracious appetite for the pleasures of this world” and announces that “His first novel, Wolf, will be published by Simon and Schuster this fall” (making the book of poetry essentially part of the ad campaign for the emerging novelist). What’s notable is how consistent Harrison’s concerns’ve remain’d. Here’s one of the ghazals, number’d XLVI:

O she buzzed in my ear “I love you” and I dug at
the tickle with a forefinger with which I knew her.

At the post office I was given the official FBI
Eldridge Cleaver poster—“guess he ain’t around here.”

The escaping turkey vulture vomits his load of rotten
fawn for quick flight. The lesson is obvious & literary.

I say it from marrow depth I miss my tomcat gone now from
us three months. He was a fellow creature and I loved him.

(That repeat’d line, in both what it acclaims and in its sly repetition—again, Wright-inflect’d, rather, or nearly, avant la lettre). There’s probably a story untold about that momentary flood of ghazals in English of the late ’sixties and early ’seventies, one of the thirteenth century Persian / Urdu form’s periodic and short-lived outbursts in the West. I notice that a man named John A. Thompson writes a blurb for Outlyer (“Harrison’s words are so real and are about such real things that at first they sound like something you must have heard someone say out loud, perhaps some tentatively friendly but formidable man in the kind of bar where you lay out your table stakes before you order your shot . . .”) I suspect that’s the Canadian poet (born 1938, in England) John Thompson, author of the 1978 Stilt Jack, apparently a hard-drinking and somewhat unstable man (he died in 1976 of “a brutal mix of barbiturates and liquor”), and a man credit’d by some with introducing the ghazal into Canada. Harrison, who attend’d Michigan State University in the early ’sixties, likely met Thompson, who received a Ph.D. there in 1966, somewhere along the way. (House of Anansi publish’d a collect’d John Thompson, I Dream Myself Into Being in 1991, with a 2006 reissue.)

I know I “got” the ghazal straight out of Harrison and recall exactly what attract’d me out of the “Notes on the Ghazals” (it begins: “Poems are always better than a bloody turkey foot in the mailbox. Few would disagree . . .” and—needling the “question” of form—works itself happily up into a wry “Personism”-style lather: “We choose what suits us and will not fairly wear what doesn’t fit. Don’t try to bury a horse in a human coffin, no matter how much you loved the horse, or stick some mute, lovely butterfly or luna moth in a damp cavern. I hate to use the word, but form must be an “organic” revelation of content or the poem, however otherwise lively, will strike us false or merely tricky, an exercise in wit, crochet, pale embroidery.”) that he append’d: “The couplets are not related by reason or logic and their only continuity is made by a metaphorical jump.” A constraint construct’d just loosely enough to allow all kinds of monkeying around. (Another “story untold”: relating the ghazal norteamericano to Pound’s ideogrammic method of juxtaposition, and to its derivative New Sentence Dogberry-jostling in prose paragraphs.) 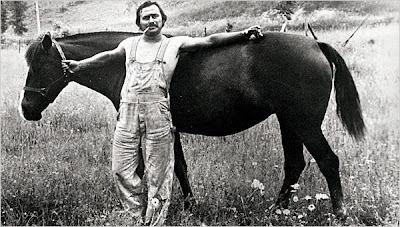