XCVII
Rattle of a gab-stertorick producing a strike-through, same guy used
To chew ’s tongue tightening a nut. He writes volumes and excises
Loudly. Compendia of little matters. Remnants of an age of
Metaphorical excess. Copious deburdenings of the voluptuarial
Tables down to the abscess level, the blood blister, the depilatory
Stench. He’d cross’d out predatory. Aureoles of detritus around
The shut-off valve of a minor waterworks. Wind-lick’d coppery wheat-
Fields cut by a sluggish stream, willow-tuft’d, home of the hard-
To-identify chebec. A famish’d “soul” is mimick’d by all we do, every second
Chapter in the Short Lives of Big Men I uncover’d in the dust-
Bin of the bothersome (I cross’d out noisy) auberge says so,
Whatever that deform’d carcass of a word means. It finds itself in a pit of
Modernity’s random accessibles, a concessionary Diomedes with only a credit
Line to command. It resembles a suppurating whelk, or a whelp, lying doggo
That way somewhere body-proxy, just the way the selva oscura looks
Like a scab (or a scar) running blood-red in low sun up the ridge, its zoo-tactile
Ooze.

Long weekend. April snow and the dull pencil industry of taxes with Beckettian diversions. Donc, the bedraggled witlessness I note fleering its japery hereabouts. (“His attention could not be mobilized like that at a moment’s notice. His attention was dispersed. Part was with its caecum, which was wagging its tail again; part with his extremities, which were dragging anchor; part with his boyhood; and so on. All this would have to be called in. When he felt enough had been scraped together he said: ‘Go!’” Murphy.) (Cæcum: The blind-gut. The first part of the large intestine, so called because it is prolonged behind the opening of the ilium into a cul-de-sac. Any blind tube, or tube with one end closed.) Which fidgeting and cartoonery is one half of some celestial Beckett equation, the other being morosity, petrifaction, glyphic muteness. James Knowlson in Damned to Fame reports Beckett’s childhood “‘love’ for certain stones.”

He recounted how he used to take stones of which he was particularly fond home with him from the beach in order to protect them from the wearing away of the waves or the vagaries of the weather. He would lay them gently into the branches of the trees in the garden to keep them safe from harm. Later in life, he came to rationalise this concern as the manifestation of an early fascination with the mineral, with things dying and decaying, with petrification. He linked this interest with Sigmund Freud’s view that human beings have a prebirth nostalgia to return to the mineral state.

(Beckett’s remarks related in 1967 to Gottfried Büttner, author of a book about Watt. I, for one, doubt not a moment Beckett’s capacity for gussying up a daft proposal—though, admittedly, I go stony myself in any proximity to the Viennese quack (Nabokov). See random Freudian antics like, “Besides the death drive that desires to go back to the pre-birth stage, and the desire for mastery of the future, there is one more desire for repetition as a result of fantasy, that is the yeaning to go back to the pre-castrative stage.”)

What jimmies open my brainbox, is how the Beckett style (pared down, minimalist, lean) is likely “contra naturam” to Beckett’s own easy-profligate exfoliant tendencies. That is to say, without the model of Joyce to avoid, to resist, Beckett might’ve succumb’d to a maximalist malarkey style. See the notably sass-brusqueries of the early Dream of Fair to Middling Women: “. . . all the novelist has to do is to bind his material in a spell, item after item, and juggle politely with irrefragable values, values that can assimilate other values like in kind and be assimilated by them, that can increase and decrease in virtue of an unreal permanence of quality. To read Balzac is to receive the impression of a chloroformed world. He is absolute master of his material, he can do what he likes with it, he can foresee and calculate its least vicissitude, he can write the end of his book before he has finished the first paragraph, because he has turned all his creatures into clockwork cabbages and can rely on their staying put wherever needed or staying going at whatever speed in whatever direction he chooses.” (Reminding me of the line out of a Flaubert letter: “People believe a little too easily that the function of the sun is to help the cabbages along.” And, because, halfway through typing Beckett’s lines I began to wonder about the way the “foreseen” and “calculated” plan goes awry—one begins writing, en faite, exactly when it goes awry—and isn’t that the point where it no longer matters if one is Balzac “mastering” (because he’s not) or Flaubert (again) beating on the crack’d pot: “. . . because the most exaggerated speeches usually hid the weakest feelings—as though the fullness of the soul did not sometimes overflow into the emptiest phrases, since no one can ever express the exact measure of his needs, his conceptions or his sorrows, and human speech is like a cracked pot on which we beat out rhythms for bears to dance to when we are striving to make music that will wring tears from the stars.” Although, it’s pertinent to note Beckett’s gentle disparaging of the facilely contain’d romp, too: “Such a paraphrased abrégé would seem to indicate, unless there be some very serious flaw in our delirium, that the book is degenerating into a kind of Commedia dell’Arte, a form of literary statement to which we object particularly.” 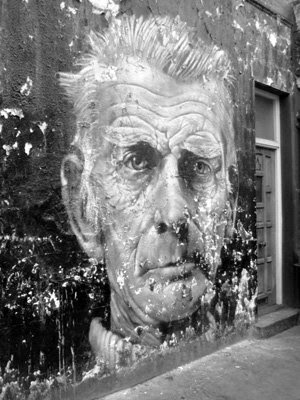