CXIX
The heart, nobody
bothers with what
the heart with
its four valves
mitral and aortic,
pulmonary and tricuspid,
and its million
barrels of blood
pump’d and repump’d
bawls out, unsubmitting,
criminal and vehement.
It’s nothing, it’s
‘a pitous soun’
no sentry’d deign
mark registry of
in the book
of gummings-up,
works of purulence
and night. Better
to keep all
the channels running
clear, cleansed of
rot and unclouded,
no ‘conniption at
the sight of
poor Snap’ fits,
nothing to clot
up—or cleave
to—the adherent
sore machinery of
the plangent utterance.

Here’s the original of Bill Berkson and Frank O’Hara’s “Reverdy” as it is print’d in Hymns of St. Bridget & Other Writings (Owl Press, 2001):

Reverdy is not like Chopin. He is a long city street with small musical houses on it.

There is a word, rédacteur, in French, of which I cannot recall the meaning.

Here are two cups, a Keats, a comb and a brush, four packs of cigarettes, an ashtray labeled “Chance,” two boxes of matches, a rope, Always Love a Stranger, a wire brush and a carved piece of wood, which I cannot understand. This is where Reverdy still lives, inexplicable as ever.

What strikes the eye hurts, what one hears is a lie. What is written struggles through, and then has struggled through and is white. The snow lasts because of the sun. Never letters, always messages.

Here we are, getting ideas like the French, yippee!

We discovered many years ago that in French you can say anything . . . Except certain things which Eliot, Valéry, Claudel, Béranger and others have said. Yippee!

Picasso is fire, Reverdy is flint. In America flint is used for arrowheads as well as tinderboxes. Do you like to hunt for what you eat? Are you a cannibal? Is there order outside of insanity or just a maelstrom of velleities and mistakes?

Je suis las de vivre dans le pays natal. When you get to the maelstrom let me know. If you have to pick the ashes off your cigarette, you are born to any given work of modern art. We no longer know what wires are wrapped around us than what air we breathe. We no longer care who is next door; we know how they feel about us. One drinks more than one thinks. There is no sense in coming home “early.” We are already in the maelstrom which is why we don’t “know” it. I want to get up “early.”

In America there is only one other poet beside Reverdy: William Carlos Williams.

They are both alone. How do you feel about titles like They Are Both Alone, Wake Up and Die, You Die with Your Eyes Open Don’t You?, Chair Vive, Poem?

We have made ourselves cretins for Reverdy’s sake.

We must all pretend to feel fine or get shot like a horse.

Berkson adds the note that “John [Ashbery] agreed to translate what we wrote into French” for the “issue of Mercure de France honoring Pierre Reverdy who had died of a heart attack, July 17, 1960” and that “You Die with Your Eyes Open Don’t You and Wake Up and Die were two of the working titles for a Horace McCoy-type low-life novel Joe LeSueur was working on at the time.” What I find odd about the Ashbery translation is how elegantly it puts some of the boyish collaborative tomfooleries of Berkson and O’Hara. (According to a 1988 Berkson letter in City Poet, the piece was written in Paris “during what was probably the peak of our friendship”; the return flight produced “Flight 115: a play, or Pas de Fumer sur la Piste” with its hijinks and slap-happy sass: “Who do you take me for, Eckermann? Ciassime di suo modo, right? I do agree that tea is terribly messy when you consider the glissance of sherry.”) In some places, the Berkson / O’Hara original seems written in a kind of intentionally clumsy mock-translatorese—“ a word . . . in French, of which I cannot recall the meaning.” Or: “These are two American sayings showing a lack of Reverdy. (Both Ashbery’s “mot . . . dont je ne peux pas arriver à connaître la signification” with its fuss to arrive, and “Ce sont deux maximes américaines qui prouvent l’absence de Reverdy” seem measurably “natural” in comparison. Too, there exist some ameliorations in the Ashbery: the hang-jaw (and funny) “We have made ourselves cretins for Reverdy’s sake” becomes “Nous sommes dans le maëlstrom à cause de Reverdy” (which wrongly makes of the maelstrom a nigh-transcendent figure). Ashbery completely drops the sentence: “I want to get up ‘early’” and changes the enigmatic “lasts” to “brille [shines, gleams]” in “The snow lasts because of the sun.” (Cusp of a statement about processual writing there in “What is written struggles through, and then has struggled through and is white” and we do know (don’t we?) the import of the sun’s “messages” (and of getting up “early”) to O’Hara.) (I suspect there’s some sense here of Ashbery attending to audience: after all, the Mercure de France volume is a combo of homage and hagiography, peculiarly (meaning, seriously) French. No American japery allow’d. Ashbery changes—interprets—the “inexplicable,” referring to Reverdy, to “inexplicablement,” referring to where Reverdy “still lives.”)

Rereading Ashbery’s “A Note on Pierre Reverdy” (collect’d in Selected Prose, though originally print’d in the Evergreen Review of January-February 1960, that is to say, undoubtedly something Berkson and O’Hara’d read), it’s odd to note how a line Ashbery quotes therein (out of Reverdy’s Self-Defense)—“The beautiful does not emerge from the artist’s hands, but what emerges from the artist’s hands becomes the beautiful”—while possibly hint’d at by Berkson / O’Hara’s “What is written struggles through, and then has struggled through and is white,” seems to echo the Reverdy in Ashbery’s version: “Ce qui s’écrit lutter pour émerger puis émerge, tout blanc.” Ashbery deftly homes in to delineate how Reverdy’s syntactically-poised work differs considerably from that of the stock Surrealist automatists, who “were careful to observe the conventions of grammar and syntax” and quotes Breton’s nagging to “Take care, . . . I know the meaning of each of my words and I observe syntax naturally: syntax is not a discipline, as certain oafs believe.” (Ashbery: “Automatic writing as practiced by the Surrealists seems to have been merely a euphemism for extreme haste.”) (In “the other American Reverdian” Kenneth Rexroth’s assessment, Reverdy’s syntax seems to receive less emphasis, as if differences were more a matter of scale: “in Apollinaire’s “Zone,” the elements, the primary data of the poetic construction, are narrative or at least informative wholes. In verse such as Reverdy’s, they are simple, sensory, emotional or primary informative objects capable of little or no further reduction.”)

In the 1962 Mercure de France volume of memoirs and testimonies, there’s a lovely report by one Alain Lapy of how Reverdy composed poems: “To compose, for him, was hardly a matter of patience and reworkings. He wasn’t one who crossed out words and syllables. When he set to work, at times for long periods, the poems’d come one after another unstoppingly on narrow sheets of paper that he’d toss on the floor. When he’d a sizeable pile, he’d shove them in a drawer, to age, like a good wine. Several months later, if not years, he’d “faire le tri” of sorting and selecting, rejecting some mercilessly and burning the ones that, according to him, didn’t make the grade. He’d say: ‘A good poem emerges wholly made. Reworking a piece is something of a happy accident, and if it isn’t done right, it risks spoiling the whole thing.’” (Which all sounds rather Frank O’Hara-esque to me.) And Laby quotes Reverdy (out of a preface for Georges Herment’s Déluges): “The poet’s torment is not that he carries an enormous burden of thoughts, the thing that makes the foreheads of those who have so much to say seem to topple ever forward, but the opposite—that of having nothing particular to say to anybody, that combined with only being able to convince oneself of one’s own reality by writing. And he’s got nothing else to express but himself. Nothing interests him but himself: the movement of waves that things holding forth exteriorly to him mimic in him. Out of that sonorous abyss, he must shout out an echo. Which is why the poet must needs write furiously, in the quick of it, like one firing off a gunshot.” (Which version is likely infelicitous and wrong. I like to fire off shots of translation as a means to think. None of that bulbous forehead toppling for me; mine’s the opposite dilemma: so little “front-matter” (empty-brainbox syndrome) my head tends to tilt “back” of its own accord. I am perennially caught gazing vacantly at the sky.) 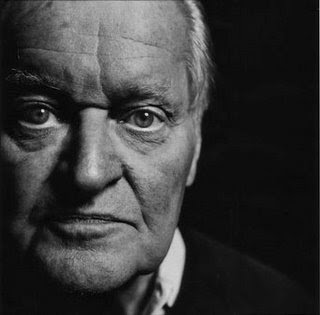