CIII
A three-day nonstop feed of good weather (with early migrants
Toss’d in) works to detonate the dubious surly boom of the already
Nascent spring, the usual onerous hurrahs for the one who crawl’d
Up out of it mark’d by thwart’d diffidence bordering on caustic
Insobriety around the glazed butt of ham (minus a few light chores
Intervening.)

Gathering up the sheaf of dog-ear’d pages of my latest constituent, Beckett, only to descend into doubt (Ted Berrigan’s line out of “Easter Monday”—“‘I’m working out the structures of men that don’t exist yet.’”): what’s the point of noting how some other man reaffirms, say, one’s own arrant-arrogant (and likely ill-consider’d) suspicions? (How Beckett disliked Bach: “He said it was like an organ grinder churning out phrases.”) Or how Tom MacGreevy, in a lovely phrase, puts the kibosh to one’s momentary sense of identificatory glee, noting how (impossibly!) “Sam could go straight from his morning tea or coffee to his typewriter or his books, his biblical concordance, his dictionaries, his Stendhal. I, on the contrary, had to go out and make sure that the world was where I had left it the evening before.” (Recalling all the years when, half-sober and mimsy’d by whatever bottle’d clunk’d one’s head the night before, of course, it—meaning the world—wasn’t. Leading one to a repeat’d rigmarole of attempting to locate it again, ad infinitum.) In the annual reading of O’Hara’s “Easter” (“The razzle dazzle maggots are summary / tattooing my simplicity on the pitiable.”), one noted (with a tolerably approbatory nod—as if that matters) the ever-poised and unresolved (unrequited, meaning, the orgasm not “achieved”) lines:

Rejecting that brash spoil’d kid sense of how the world, inimical, owes one something somehow, or needs one’s “work” (or should—if only the benighting scales’d fall off one’s eyes). (“Nobody should experience anything they don’t need to, if they don’t need poetry bully for them.”) (Ted Berrigan’s line out of “Easter Monday”—“‘Loyalty is hard to explain.’”)

Is the anti-Bach Beckett related to the anti-quip Beckett? Thinking of Beckett’s aversion to the feeble sallies of academic wit (to MacGreevy he deplores the “little jokes—the kind that dribble into a subtle smile” and damns the scholarly exhibits (at Trinity College) of “Quip—that most foul malady . . . the eternally invariable formulae of cheap quip and semi-obscene entirely contemptible potin [tittle-tattle]”). And that effectively bedighting my morning’s flailings with some array: of notes in little splashes of fury; of smarm-infest’d one-liners of the quipsters; of the similarly ineffectual skippiness of the New Sentences—how (the problem is) none of it (by its very structure) is capable of getting up a full head of steam (Bach’ll never thrash one’s heart the way Beethoven will). (It takes consequentiality and reiterate banging to budge a mountain.) (Ted Berrigan’s line out of “Easter Monday”—“‘The question seems prosecutorial.’”)

Enough diatribe and haught-naughtiness. What I liked “weekendwise”: dousing a crud-rust’d bicycle chain in a foamy broth of two cans of Co’-cola. A recommend’d method of rust removal. (Ted Berrigan’s line out of “Easter Monday”—“‘Hard fight gets no reward.’”) A bicycle glean’d off the street. Tires repair’d with patches. Frame stripped of doodads and clean’d. Okay, I’d better go out and make sure the world’s where I left it last Friday. (Ted Berrigan’s &c.—“‘To go on telling the story.’”)

”Antlers have grown out the top of my shaggy head.”
“And his conclusions to be unaccompanied by any opinions. . . .”
“You can’t have two insides having an affair.”
“Why not then spiritualize one’s midday food with a little liquor?”
“The question seems prosecutorial.” “The house is lost
In the room.” “Loyalty is hard to explain.”
“Hard fight gets no reward.” “A woman has a spirit of her own.”
“A man’s spirit is built upon experience & rage.”—Max Jacob.
In the air, in the house, in the night, bear with me
“I always chat to the golden partner.”
“I’m working out the structures of men that don’t exist yet.”
“A gladness as remote from ecstasy as it is from fear.”
“To go on telling the story.”
“Give not that which is holy to dog.” 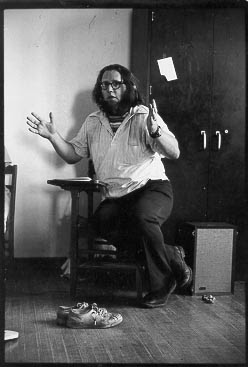 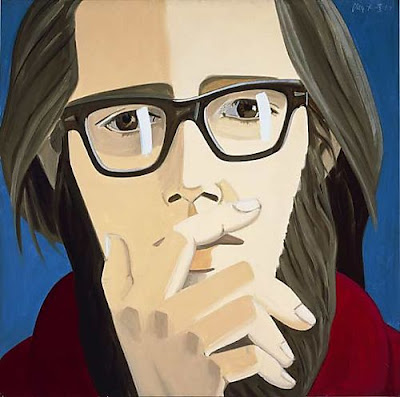