CX
A slight antagonism to obtain
Something in lieu of memory.
The forsythia popped out everywhere
In my absence, I like
The aimless arm-waving havoc
Of that yellow, unclipped. And
Chine-leaf’d chinodoxa, petulantly blue.
A man walks by, legal
Brief unfurl’d, seersucker jacket ajar—
He’s out of luck, out
Of territory, a crazy man
In a hood’d sweatshirt is
About to rip a switch-
Blade down along the man’s
Backbone in a thwart’d messianic
Fury to adjust. Pianissimo is
The blood ebb, and red.
In lieu of memory’s spot-
Light: the way the blood-
Soak’d jacket took a vague
Plum-color’d look, a bloat’d
Horrible ripeness that conceal’d whatever
Human remain’d. That and, askance,
Angling up out of that
Brutally focus’d cone, a wild
Bursting spray of yellow forsythia.

How blithely out of whack three days’ll put one. And the sluicing rain with accompanying piscatory ammoniac smell steaming up, scent visible, off the streets, I wrap’d in yellow “gear,” a blossom dear in the semi-repugnant dawn. I like to cut loose and just sauce (I mean sass) after a writing “project,” don’t you? Such an uncertainty of accomplishment tied up in knots of anxiety that I just like to bust up all the danke danke politesse with a tawdry besmirchment, don’t you? That Beckett suspect’d the Great Cham of impotence and wrote a sheaf of pages toward a play about “it”—and the vivacious Mrs. Hester Thrale—I find that astonishing, don’t you? (I, too, make a practice of imagining various writers—even you—with débile enfeeblements and hang-ups, mostly sexual, well, what isn’t?) I love Beckett’s refusal of system, refusal of anything that smack’d of the explanatory “larger force”:

I am not interested in a ‘unification’ of the historical chaos any more than I am in the ‘clarification’ of the individual chaos, and still less in the anthropomorphisation of the inhuman necessities that provoke the chaos. What I want is the straws, flotsam, etc., names, dates , births and deaths, because that is all I can know.

And against a counter-argument that historical “background is more important than the foreground, the cause than the effect, the causes than their representatives and opponents,” Beckett insists:

I say the background and the causes are an inhuman and incomprehensible machinery and venture to wonder what kind of appetite it is that can be appeased by the modern animism that consists in rationalising them. Rationalism is the last form of animism. Whereas the pure incoherence of times and men and places is at least amusing.

That out of the diary that Beckett kept whilst traveling around Germany in 1936-7. Where I balk at Beckett’s “pure incoherence” is where he deposits man outside of and alien to the natural world. Talking about Cézanne’s refusal to make of landscape a thing “anthropomorphized” (“What a relief the Mont Ste. Victoire after all the anthropomorphized landscape . . . or hyperanthropomorphized by Rubens, . . . or castrated by Corot; after all the landscape ‘promoted’ to the emotions of the hiker, postulated as concerned with the hiker (what an impertinence, worse than Aesop and the animals), alive the way a lap or a fist is alive.”), Beckett points to man’s incommensurability with the natural world. Of Cézanne: “the first to see landscape and state it as material of a strictly peculiar order, incommensurable with all human expressions whatsoever. Atomistic landscape with no velleities of vitalism, landscape with personality à la rigueur, but personality in its own terms.” And, referring to

How far Cézanne had moved from the snapshot puerilities of Manet and Cie when he could understand the dynamic intrusion to be himself and so landscape to be something by definition unapproachably alien, unintelligible arrangement of atoms, not so much as ruffled by the kind attentions of the Reliability Joneses.

Is it that common Western deference-surdity of putting the “wilderness” out there that cloys at my intestinal tract? (One of Dr. Johnson’s definitions for cloy [enclouer, Fr. To nail up; to stop up.] is “to fill with loathing.” Another is “To nail up guns, by striking a spike into the touch-hole.”) And just a few days back I found myself writing that, in my present human “state,” what I long’d to do: bind myself high up in the canopy reaches of a monstrous big white pine, with a book to read to the chickadees. I’d make a tisane by steeping a hand-grap’s worth of needles (five to the fascicle) in a hat. I’d patch my wounds with its antimicrobial sap. 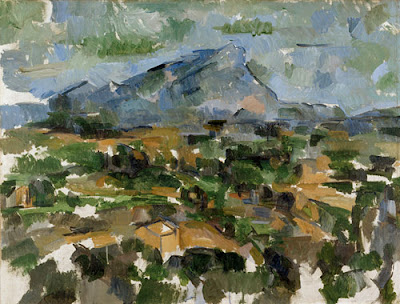