Oddly reassuring it is to note how perfectly the new gatekeepers of the “community” resemble the old—no messy adjustments to the nausea level is required, the spleen direct’d “at” those who’d rescue “us” out of the grips of “official verse culture” is so precisely like that that one formerly point’d “at” that moribund culture that the whole shift—non-Kuhnian, non-paradigmatic—becomes easier than a brand-name change: buy now, better than ever, “New Official Verse Culture” (in the innovative pop-lock box)! Here’s the story.

On Thursday, prowling through and unloading a stack’d pallet’s worth of verbiage (posts) deliver’d of late by the Buffalo Poetics List, I bang’d up against one by list-mistress (some call her the Commissar) Amy King, calling rather plaintively “out” for “Poets’ Books of 2008.” (Did the plaintive lilt I detect’d grow out of the slow-blooming monstrosity of a fact—that (I burn’d hot) not a single (Incroyable! Pas possible!) reply’d been proffer’d? Maybe.) Did the “phrasing” of the call, that echo (in “Let Us Now Praise Poets’ Books of 2008”) of the Agee / Evans muckraking into the abject rotting core in the heart of plenty dissuade the usual mouthy masses, or did the majority of the Listers simply not give a rat’s ass in a buttercup what anybody else’d writ, ever? I check’d the Poetics “guidelines”—noted the sour emphasis on self-reliance:

We strongly encourage subscribers to post information, including web links, relating to publications (print and internet), reading series, and blogs that they have coordinated, edited or published, or in which they appear. Such announcements constitute a core function of this list. Brief reviews of poetry events and publications (print or digital) are always welcome.

Core function echo’d too perfectly with rotting core. I proceed’d nevertheless. I post’d the following in direct reply to Amy King’s “call”:

Irony’s got it that possibly the most praiseworthy book of 2008 is by the banned-by-the-Poetics List (for combatting censorship) wunderkind Kent Johnson, whose Homage to the Last Avant-Garde (Shearsman, 2008) is impeccable, alert, funny, a select’d, and absolutely right for the “era.” Here’s what William Gaddis (in The Recognitions) had to say about the poems:

“Like a story I heard once, a friend of mine told me, somebody I used to know, a story about a forged painting. It was a forged Titian that somebody had painted over another old painting, when they scraped the forged Titian away they found some worthless old painting underneath it, the forger had used it because it was an old canvas. But then there was something under that worthless painting, and they scraped it off and underneath that they found a Titian, a real Titian that had been there all the time. It was as though when the forger was working, and he didn’t know the original was underneath, I mean he didn’t know he knew it, but it knew, I mean something knew. I mean, do you see what I mean?”

I review’d the book here:

End of post. Receipt confirm’d by the usual “standard (automated)” reply to the effect that it’d got “submitted to the moderator” (poetics.list@gmail.com, if anybody’d like to ask into the gruesome particulars of the situation), a thing that did not “constitute special handling.” And now it is Monday and it is clear that it is not going to be post’d. And it is clear just how pitiably insecure the running dogs and lackeys of the “New Official Verse Culture” must be, they and putative helmsman Charles Bernstein. I am certain that—were one to ask for an explanation for the latest example of censorship, of unwarrant’d control of news particular to the “community” (a specious and sophistic word, that, considering)—that one would be point’d to the Poetics List’s “Refocussed List Policy” (dated June 2008), thus:

In line with our editorial focus, we do not automatically post submissions but select those we think are most useful for sustaining this online community. We appreciate all submissions, but will be more selective in what we choose to post. Queries for contact info, messages intended for just a few subscribers, messages that are not on topic, “flame” messages, and free-standing personal poems or journal entries will, in general, not be forwarded to the list.

Which is, of course, both paternalistic and a subterfuge, condescending and a catch-all: the criteria of “use” is one so vague as to pre-exempt it under any accusation of the policy’s misuse. Rather akin to a threat to “national security”—unassailable, a tidy dishonest way of preempting the community’s (or nation’s) own judgment. It is, too, a policy of total and unquestionable control perfectly fit for the “era”—a kind of Poetics Patriot Act (of vastly increased powers of surveillance and denial). It—the policy, and they who enforce it, the refusal of the particular post, continuing denial—shameless, simply shameless. Too, it is a fine legacy for Bernstein, who’s construct’d—like a one trick pony—what career he’s managed—a considerable one, in terms of plum academic jobs, I recall how I’d had to fetch my jaw up off the floor after learning that, in the early ’nineties at Buffalo, he pull’d down something like 130K plus some discretionary funds—on the exact question of who’s in control. See, for proof, see the latest shtick call’d “Recantorium (a Bachelor Machine, after Duchamp after Kafka)”:

I Charles, son of the late Joseph Herman, later known as Herman Joseph, and Shirley K., later known as Sherry, New Yorker, aged fifty-eight years, arraigned personally before this Esteemed Body, and kneeling before you, Most Eminent and Reverend Readers, Inquisitors-General against heretical depravity throughout the entire Poetry Commonwealth, having before my eyes and touching with my hands the Books of the Accessible Poets, swear that I have always believed, do believe, and by your help will in the future believe, all that is held, preached, taught, and expressed by the Books of Accessible Poets. I was wrong, I apologize, I recant. I altogether abandon the false opinion that National Poetry Month is not good for poetry and for poets. I abjure, curse, and detest the aforesaid error and apostasy. And I now freely and openly attest to the virtues of National Poetry Month in throwing a national spotlight on poetry, so crucial to keeping verse alive in the twenty-first century.

I was wrong, I apologize, I recant. Midway in my journey as a poet, I have given my name in encomium and book-cover endorsement, both for ads and announcements, catalogs and brochures, print and digital, to works that are not of the highest order as established by Time, Authority, and Fashion, lapsing into stubborn selection based on personal preference or appreciation or liking, on intuitions and hunches, rather than rational principle and promulgated theory.

I am with regret filléd and by errors o’erwhelmed, having chosen the broken path over the righteous, the warped over the erect. I cant and recant. I altogether abandon the false doctrine that poets can remain radical while working as academics. After it had been notified to me that the said doctrine was contrary to the Books of the Accessible Poets, I wrote and published works in which I discuss this new doctrine already condemned, and adduce arguments of great cogency in its favor, without presenting any negation of these, and for this reason I have been vehemently and justly rebuked. I abjure, curse, and detest the aforesaid error and aversion. Academic employment is the mark of a compromised poet who has sold out. Radical poets prove their authenticity through poverty.

I am with regret filléd and by errors o’erwhelmed, having chosen the broken path over the righteous, the warped over the erect. I cant and recant. I altogether abandon the false opinion that advocacy or partisan positioning has any place in poetry and poetics. Poetry and poetics should be reserved for those who look beyond the contentions of the present into the eternal verities, the truths beyond this world that never change, as represented in the Books of the Accessible Poets. I further stipulate that I recant, categorically, that poetry is an activity of the intellect and herewith and hereby declare and proclaim that true poetry is an affair of the heart and only the heart.

And tediously thus it continues, whilst the few drinkers in the dim little club call’d Critical Inquiry sop up manifest sorrows, slumping. One a smart-aleck chorus boy named Jerome McGann goes the elbow-rubbing distance with a reply:

Do you think that one schooled for eight years in the insidious ways of Jesuitical discourse would be deceived by this deceptive text? Not likely. Midrash indeed! We know the literary heritage on which St. Ignatius and his warriors erected their rhetorical skills. Unam, sanctam, catholicam. A.M.D.G.

But truth will out. “Confess and abjure and recant” as you may—these are mere airy nothings, words, wordswords, turdsworth, as a true poet once knew. A cold eye will note this telling (and cunningly repeated) phrase: “now and in the future, in this life and in all subsequent lives, on earth as well as on other planets populated by intelligent beings.” To that the scrutinizing soul will ask, And what, sir, of heaven! . . .

Whatever. None of it is of a very high satirical calibre. McGann wins an even more meagre-mind’d reply:

All too sadly fucking predictable for words—the self-satisfy’d white men yucking it up, smarm quotient high, repeating the old stories of the old battles. One recalls Jerome McGann at Virginia, an academic who fancy’d himself a cowboy, or a desert father—he sport’d a grand leather Stetson. Rumor’d to publish language writings under an assumed name, oh sweet calvary. Charade-city breakdown, how clear it is Bernstein’s become the butt of ’s own self-same monstrously tiresome joke. Who needs it?

The minor brouhaha surrounding Linh Dinh’s interpretation of the late Wallace Stevens poem titled “The House Was Quiet and the World Was Calm”—a spat mostly about editorial gangsterism (or suggestion if one prefers), or not (I suspect that there’s little point in clumping editor / writer doings into a pile of any size; like, oh, say, marriages, such be presumably too various to make general)—is one that hocks its phlegm only rather sparsely into the doings of the poem itself, though, if I comprehend the uproar, Dinh’s calling the poem a “period piece” isn’t what’s being debated. He argues that one’s house is no longer “rarely quiet, calm or even a refuge anymore” thanks to “the increasing intrusion, to the point of madness” of the “outside.” Which caused one to turn one’s mild eye at Stevens’s piece, a piece that’s seem’d (to the mild eye) mostly caricature-soak’d, an example of Stevens writing a Stevens poem. Isn’t “The house was quiet and the world was calm” simply a poor cousin to “Gubbinal”’s “The world is ugly, / And the people are sad”? Isn’t the second line, “The reader became the book,” another of the endlessly iterated verbal joineries found in Stevens, like “Loneliness in Jersey City”’s “The deer and the dachshund are one”? Stevens’s tics getting an unwont’d airing, is how the piece seems (thus it attracts ephebes to its exegesis even whilst, by means of its extremely small vocabulary, it defends itself against interpretation, the way a riddle might). Frankly, I think it a dogged little piece of dishonesty, wanting “much most” to be the “truth.” (Per contra, and in opposition to Dinh’s assertings, I doubt it needs a world “outside” to buoy it up (or plunge it down) at all: it is pure artifact of a mind over-accustom’d to itself and its wiles. Whether such a mind required something other than “the great unraveling” that Dinh says we’re experiencing: that I doubt, too. (I find suspect claims that one or another age demand’d more—or less—human tenacity to stomach.) 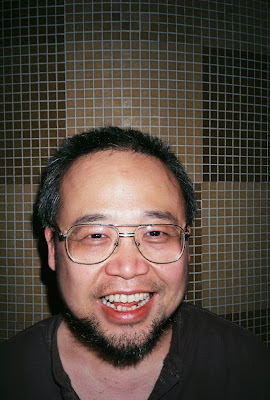